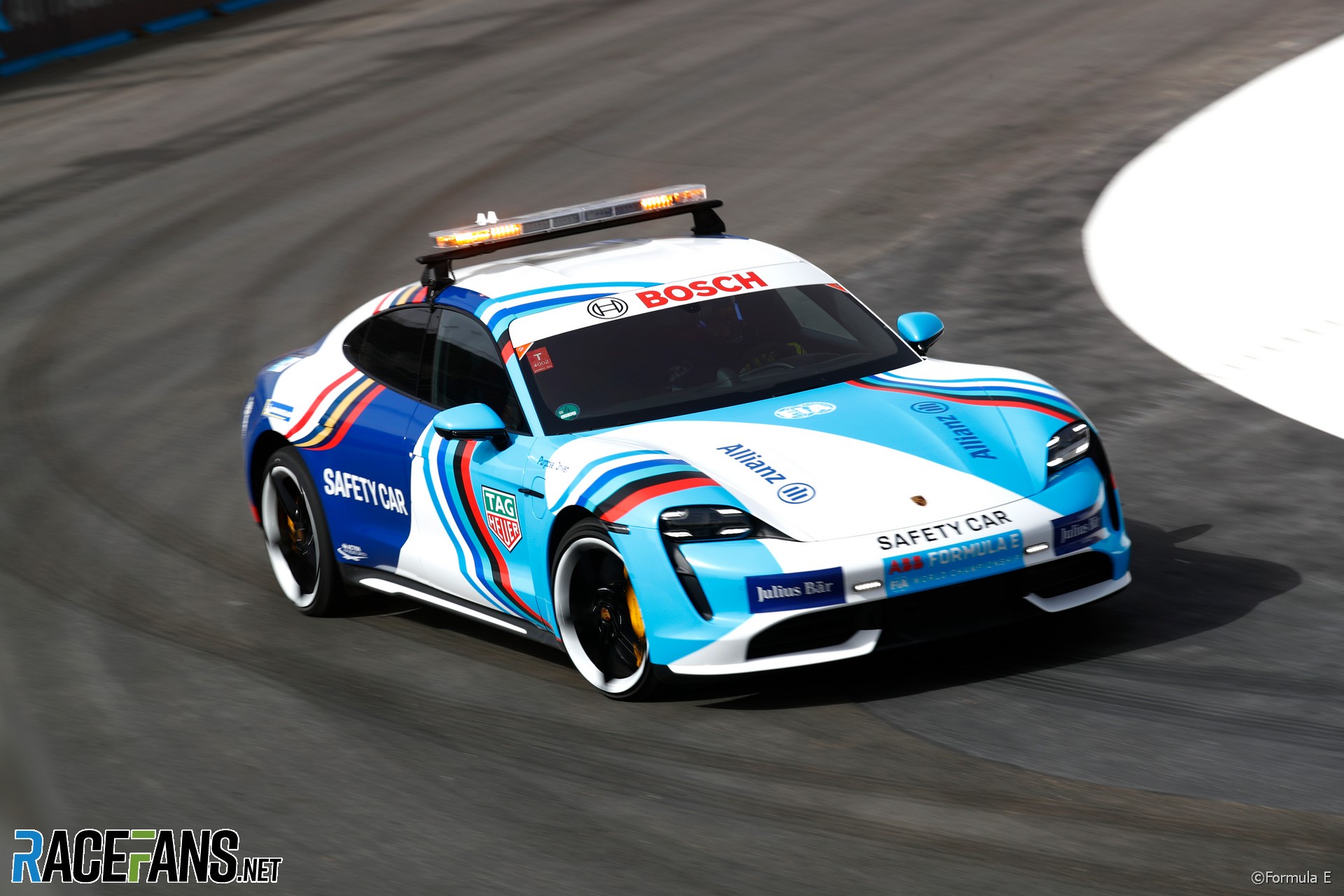 Lucas di Grassi believes that all Formula E races with late Safety Cars should have their race time extended to enable a green flag finish.

The second round of the Formula E season in Diriyah ended under Safety Car after Alexander Sims’s crashed Mahindra was not recovered in time for racing to resume. While a new rule for this season does allow for race control to extend the race duration, it is prohibited in the final five minutes.

Di Grassi believes the five minute threshold should be lifted. “I think the rule is good, but it needs to be fine tuned,” he explained.

“I don’t think there is any reason for the last five minutes not to have the extension. It’s just a matter of calculating how much you need to extend the race. So nobody runs out of energy and nobody keeps the same amount of energy because it’s easy to calculate. And then you can extend, if needed.

Asked whether world championship series such as Formula E should ever allowed to finish under Safety Car conditions, Di Grassi says it should not be a requirement.

“I don’t think finishing under Safety Car [should be] if it’s considered a world championship or not – I don’t think that’s the metric,” Di Grassi said.

“Because F1 also finishes under a Safety Car. It happens sometimes… or one lap to go with half a rule for half the cars and for other cars another rule. But anyway, I think that the rule can be fine tuned so that they can use these extra ten minutes in a better way.”

Hadrien David won the first of three races for this weekend in the Formula Regional Asian Championship at the Dubai Autodrome.

The 3Y Technology driver took the chequered flag ahead of Pepe Marti in second and Sebastian Montoya completing the podium after the race finished under Safety Car following an accident involving Masters class driver Thomas Ludi.

FIA secretary general for sport, Peter Bayer, suggested that Max Verstappen would have have been declared as world champion even if Mercedes had chosen to appeal the results of the Abu Dhabi Grand Prix and been successful.

In an interview with Austrian outlet Vorarlberger Nachrichten, Bayer expressed his view that even if the results of the race had been nullified, Verstappen would still be declared champion due to winning the points tiebreaker over Lewis Hamilton.

“I think the judges would have said it’s different in the regulations, he decided that way, so we could just void the result,” Bayer is quoted as saying. “But even then – if it were canceled – Max Verstappen would have been world champion.”

not a fan of:
-that big queue of cars (with hot brakes and spent tyres) clonking each other
-cars on a narrow track with a tractor, ever
-generally the way that safety car was communicated#DiriyahEPrix

What a pleasure it was to be part of the all electric opening race for the @fiaformulae Season 8 at the #DiriyahEPrix. This hot lap was an unbelievable experience in the @porsche Safety Car.

Baby it's (still) cold outside 🥶🏠 pic.twitter.com/efH0Fky4mX

Next weekend, Mick and Seb will team up at the @RaceOfChampions in Sweden 🇸🇪 pic.twitter.com/Pw3E2vTEZ5

In the NTT @INDYCAR SERIES, they're rivals. In @IMSA, they're teammates.

"Perhaps what’s most impressive about McLaren’s achievements last year is not only did they change engine supplier again – they moved from Honda to Renault for 2018 and then to Mercedes for 2021 – but they did so when the regulations remained stable, making fitting a new engine architecture into an existing concept even trickier – and yet they hit the ground running. "

Nissany ‘certain’ that physiological training has furthered his development (Formula 2)

"I have to be faster, and I am going to work very, very hard to be faster. I am working towards this via many aspects, brain training, and mental and psychological training, as well as physical training and simulator work. I am doing anything that I can do, even if it is shifter karts or drifting on the ice - anything that can build the neurons in the brain that I use while driving."

Herta to replace injured Pastrana in Race of Champions (AP)

"Herta will take his place alongside seven-time NASCAR champion and current IndyCar driver Jimmie Johnson. The ROC 'Snow + Ice' World Final will be held next weekend in Pite Havsbad, Sweden, on the frozen Baltic Sea, 60 miles south of the Arctic Circle."

"You know, hopefully IndyCar stops putting races on the same weekend as sports car racing. I think there’s two conflicts this year with Sebring and then also with Le Mans. Everybody knows when those races are, so that gets a bit frustrating, but, you know, I think maybe once Roger is competing in the field, that those conflicts won’t happen!"

With the news that Le Mans and Daytona will name chicanes on their respective circuits after the other, @fer-no65 realises something about the symbolism of it all…

Somehow naming chicanes doesn’t feel right I mean both were put in place to slow cars down… There’s nothing “Le Mans” or “Daytona” about it… Would’ve been better to choose a faster corner or straight, don’t you think?
@fer-no65