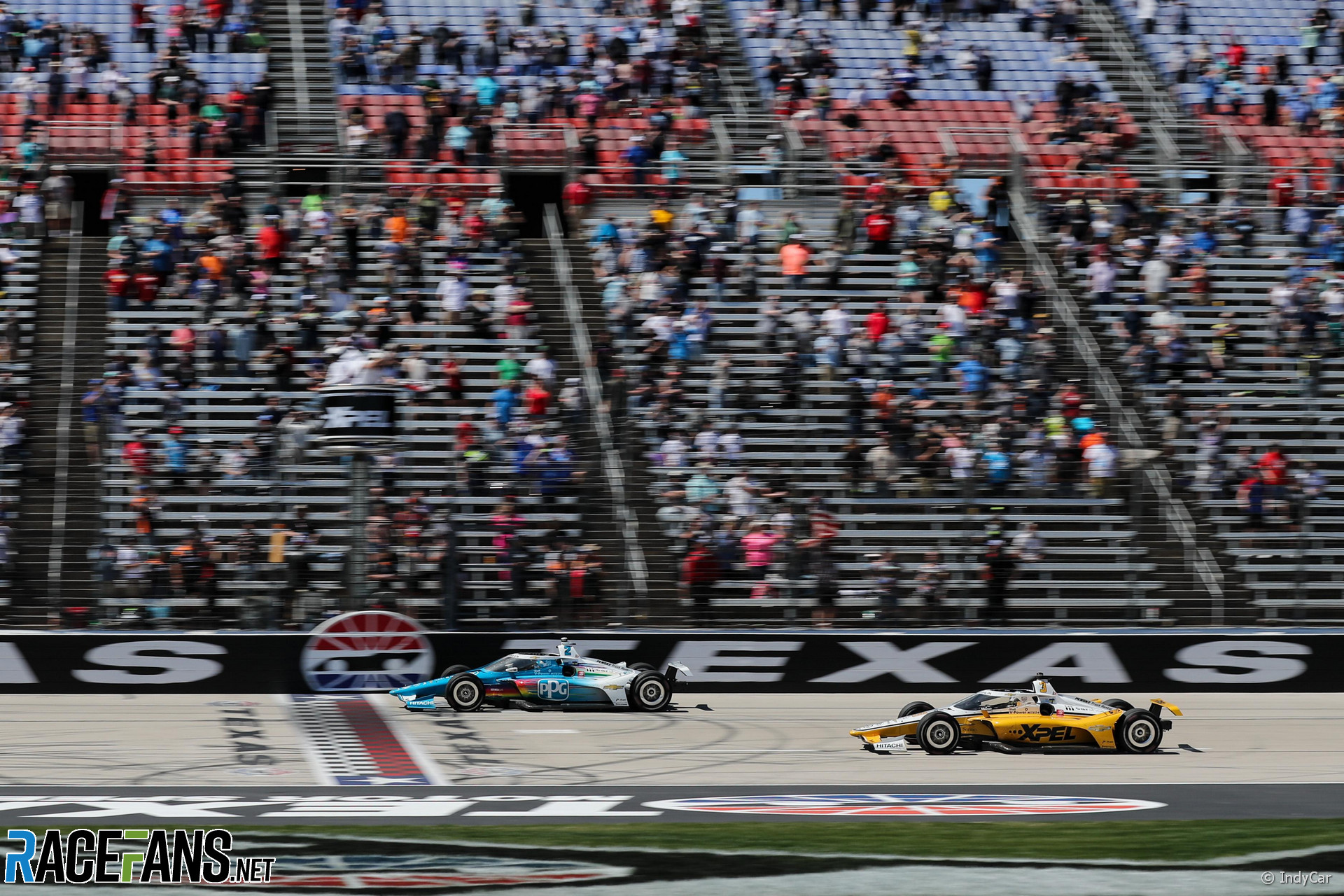 At the end of a gripping tactical battle at Texas Motor Speedway, Josef Newgarden overtook Penske team mate Scott McLaughlin on the last lap, in the final corner, to win.

Newgarden was able to make the winning overtake as McLaughlin – who led 186 out of 248 laps – encountered a wave of lapped traffic ahead of him, putting his car in turbulent air. That gave Newgarden the chance to make the move around the outside in turn four, and win the race by just 0.067 seconds.

McLaughlin led the opening stint of the race after passing polesitter Felix Rosenqvist on the opening lap, but Newgarden – who started seventh – found himself in second place after the first cycle of pit stops. A string of accidents and caution flags brought the two Penske drivers together on track, with McLaughlin running ahead for much of the race, right until the final few hundred metres.

Despite being denied his second consecutive victory to open the year, McLaughlin will be consoled by leaving Texas with a 28 point lead in the IndyCar Series championship over Penske’s senior driver Will Power, who finished fourth.

Behind Newgarden and McLaughlin, Marcus Ericsson quietly worked his way from 14th on the grid and was a factor for the win in the final laps. Ultimately, he would finish third, as the top Ganassi driver.

Jack Harvey, who suffered a concussion after an accident during a post-qualifying practice on Saturday, was declared unfit to race. His substitute, Santino Ferrucci, fought his way from 27th and last on the grid to finish ninth with just a few hours’ notice before being strapped into the number 45 RLL Dallara/Honda.

Rinus VeeKay rounded out the top 10, ahead of David Malukas, the only rookie to finish all 600 kilometres in 11th.

The fortunes of Andretti Autosport unravelled almost immediately. Alexander Rossi broke down after 11 laps and brought out the first of four caution periods. Rookie Devlin DeFrancesco was a factor in separate accidents involving Takuma Sato and Kyle Kirkwood, pushing both drivers into the dusty portion of the outermost lane and into the wall. Both drivers were unharmed.

Romain Grosjean retired from his first superspeedway oval race when he suffered an engine failure during the second caution for Sato’s accident.

DeFrancesco’s erratic first outing at Texas ended when he, Graham Rahal and Hélio Castroneves crashed out in turn three, causing the fourth and final caution. All three drivers were okay after the accident. Adding insult to injury, Colton Herta dropped off the lead lap after a slow final pit stop, finishing 12th after running in the top five for most of the race.

On Saturday, IndyCar conducted two practice sessions to try and alleviate the lack of grip on the outside groove at Texas’ corners, which are treated with PJ1 traction compound to accommodate NASCAR. While most overtakes were still done after restarts, the quality of racing on the whole proved to be better than in recent years.