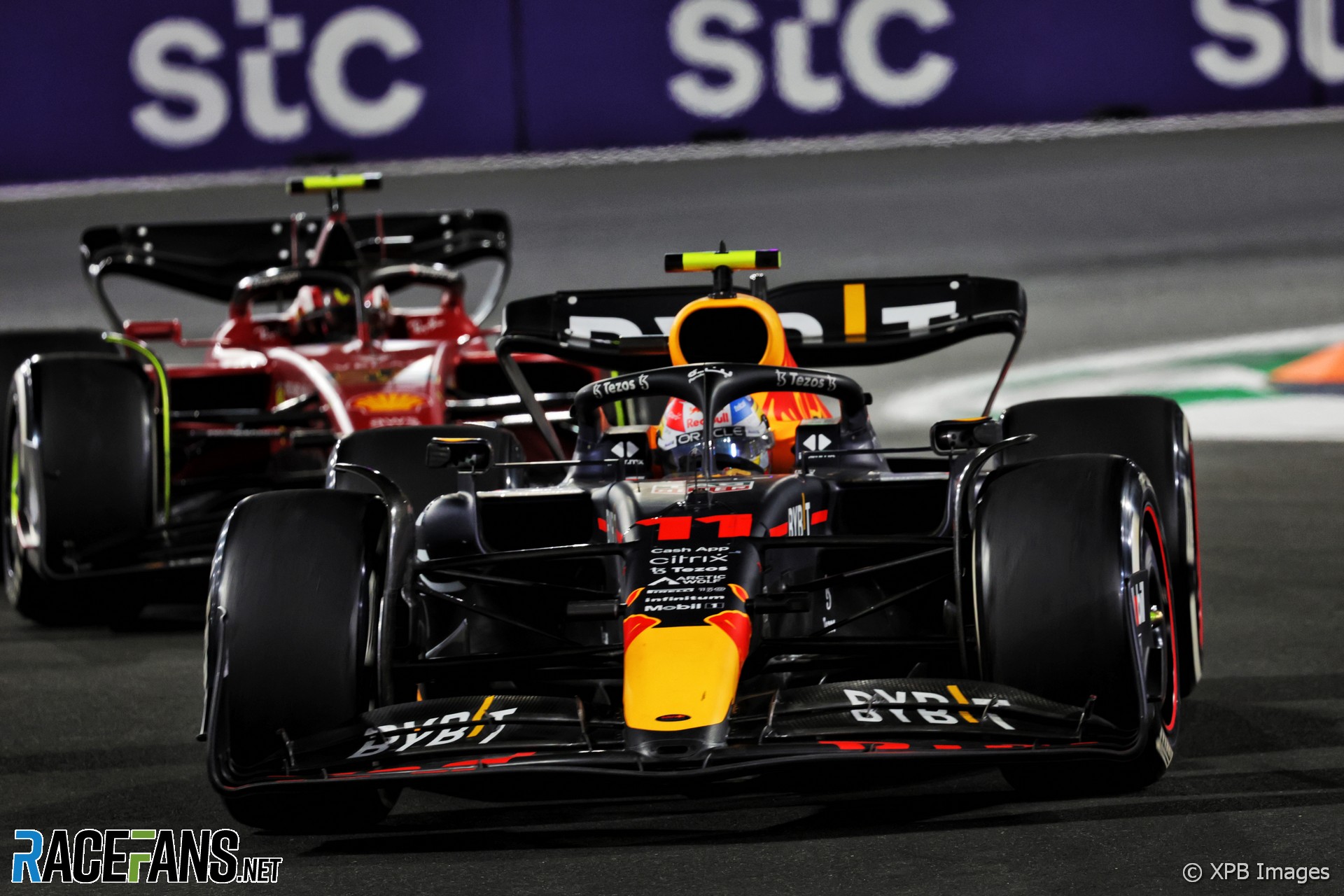 Carlos Sainz Jnr wants the FIA to explain why he had to wait until after a Safety Car period had ended to regain a position Sergio Perez had incorrectly taken from him.

The Ferrari driver emerged from the pits fractionally ahead of his rival after his lap 16 pit stop under the Safety Car. However Perez moved past him into third place.

Perez did not relinquish the place until the race restarted four laps later. Sainz had foreseen the very situation unfolding earlier in the week, saying drivers had to be prepared to give up places “immediately” if they had incorrectly taken them.

“You cannot lose three or four laps, then have to give up the position,” Sainz said on Thursday. “That’s why the rulebook needs to be super-clear, needs to be applied in a moment that there’s any friction.”

Speaking after the race Sainz said the incident with Perez was “a number one priority that we need to talk with the FIA.”

Sainz pointed out that because Perez slowed to let him past at the restart, both ended up further behind race leaders Charles Leclerc and Max Verstappen than they should have been.

“We had a lot of laps to do it. The FIA didn’t allow us and I think for the sake of racing on the sake of Formula 1, these kind of things, they need to happen quicker and they need happen more efficiently.”

F1’s rules require drivers to maintain position during Safety Car periods. However during last year’s race at the same circuit Verstappen allowed Esteban Ocon and Lewis Hamilton to pass him prior to a restart following a discussion with former FIA F1 race director Michael Masi.

Sainz pointed out that failing to do the same this time gave an opportunity for other drivers, such as fifth-placed George Russell, to pass him.

“We created a mess that for me is unnecessary, given the fact that we did six laps behind the Safety Car and there were millions of opportunities for Checo to let me by and have a good fight at the restart.

“So I don’t know, it’s just these kind of things that as a sport we need to keep getting better at because I think we need to simplify things and just make it more quicker and easier for everyone to understand and even for the drivers to go racing with a much clearer mind.”

Sainz previously criticised the handling of the final-lap restart in Abu Dhabi when Masi made the unprecedented move of only allowing a selected number of lapped cars to rejoin the lead lap. The Ferrari driver, who was running third at the time, was left behind a pair of backmarkers, while the five lapped cars between second-placed Verstappen and race leader Hamilton were moved aside. He said that decision cost him a chance to fight for a win.