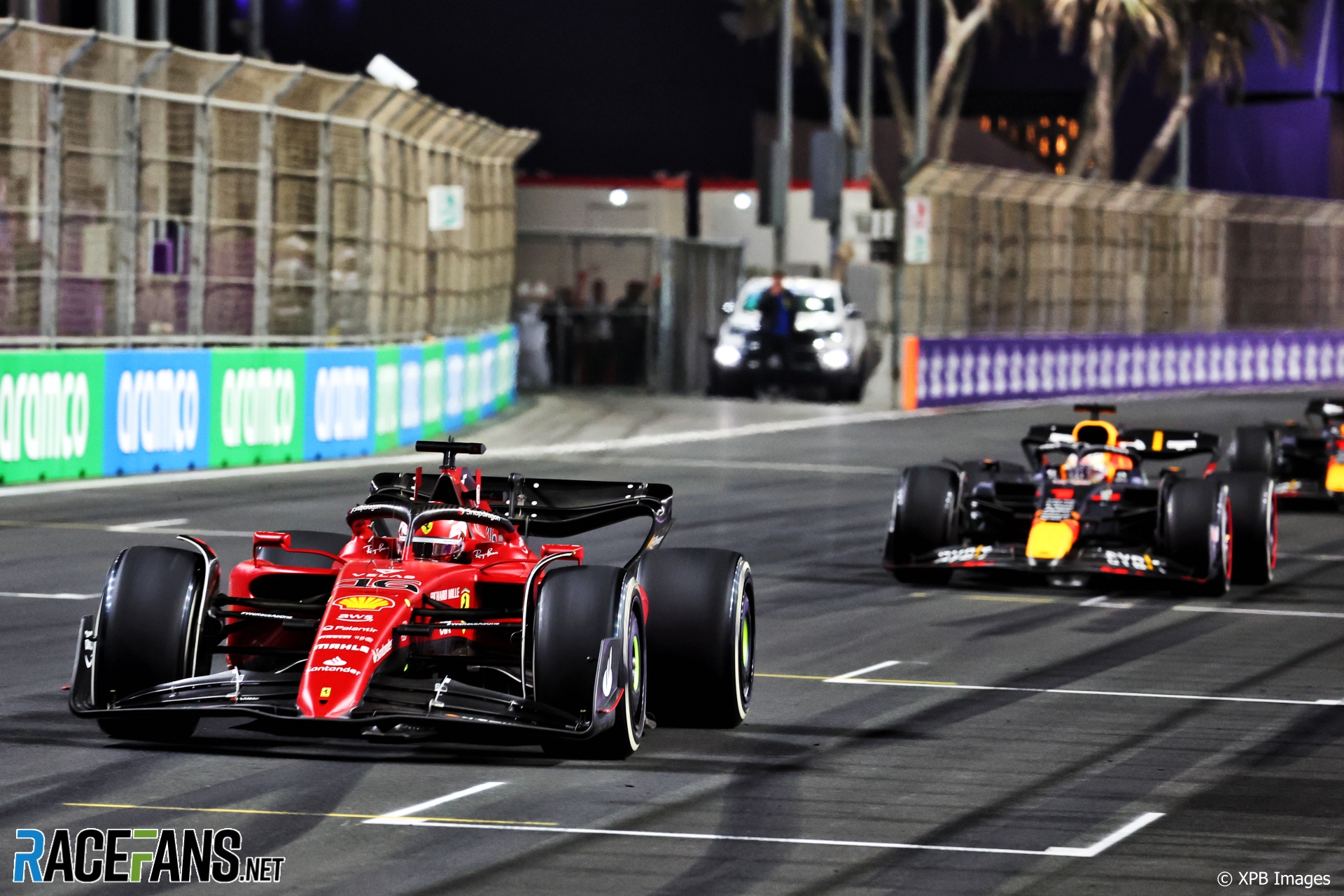 Max Verstappen won the Saudi Arabian Grand Prix by patiently working himself into a position to take advantage of his Drag Reduction System on the start-finish straight.

Until that decisive move was made on the 46th lap of the race, the Red Bull driver had spent the best part of 80 minutes staring at the F1-75’s rear wing.

That gave him plenty of opportunity to observe what Leclerc was up to. He tried to turn that to his advantage as well, highlighting any possible infringement by the Ferrari driver which the stewards might pick up on: The lights on his car, his line on the main straight, his observance of yellow flags.

Eventually Verstappen’s race engineer Gianpiero Lambiase urged him to “calm down” and “let us do our work.” But Verstappen always seemed to have his driving under control, and eventually teed Leclerc up for a race-winning pass.

Before that, the pair of them had to get into position to win the race. Pole-winner Sergio Perez led the opening laps, but behind him second-placed Leclerc was eager to apply strategic pressure, urging his team to consider a pit stop in an attempt to get ahead of the leader. But Red Bull pre-empted the move, bringing Perez in first.

“We were ready to pit,” Leclerc said afterwards, acknowledging that he would have come in had Perez not done so. “We basically went for the opposite to Checo in front, and he boxed that lap, so I think we did the right choice.”

It turned out that way because the Safety Car appeared moments later, allowing Leclerc to make his pit stop while losing less time, and take the lead.

Verstappen pitted too, discarding his medium compound tyres for the hard rubber. “I didn’t really feel that happy on the medium,” he explained. “All the time, when you would get close to the car ahead the tyres would die.

“So there was not much racing going on there. It was a little bit frustrating to just sit there and wait for the right lap to pit so you could go onto the other tyres, because as soon as we went on to the hard tyre I had a much better feeling.”

After the Safety Car came in, Red Bull played the long game with Verstappen, expecting his superior straight-line speed would eventually offer him an opportunity to get past.

“I tried to stay close with Charles after the Safety Car restart and I was just trying to keep the gap more or less the same,” he said. “And that was basically it, just trying to match the lap times, trying to get a bit closer, then he was pulling away a bit. I got a bit closer again.”

Their cars’ strengths lay on different parts of the track, Leclerc noted. “It was very difficult because we had two cars that were in a very different place. I was very strong in the first sector, in all the corners, and basically much less strong in the straights.”

The race’s second interruption came when Fernando Alonso and Daniel Ricciardo slower, the latter coming to a stop in the pit lane entrance, triggering a Virtual Safety Car period.

For the pair contesting victory at the front, this meant ensuring they brought their tyres back up to operating temperature after cooling at slower speeds. Meanwhile Leclerc was watching Verstappen just as his rival watched him, at one point alerting his team the Red Bull driver suddenly seemed closer than he should be while the race was neutralised.

Verstappen said he hadn’t been trying to game the system to get closer to his rival while obeying the delta time intervals applied during the VSC period.

“To be honest, I was a little bit surprised myself that it did look a little bit closer, but I don’t know how close Charles was to zero with the delta,” he said. “That’s always a bit of a question mark.

“But also, sometimes it depends a bit where the restart is: If it’s in a corner for somebody in front or not. I think I was still on a bit more of the straight side and I had a bit of a better run into turn four as well.”

The VSC period ended with 11 laps of racing to go and now the fight for victory was on.

“I knew that the strength of Max and the Red Bull in general this weekend was the straight-line speed,” said Leclerc. “So I basically knew that if I was leaving Max with a DRS behind for the main straight, I will basically be overtaken very easily.

“So, I just wanted that, DRS, so on the first lap, I braked very early and I got the DRS and manage to overtake back on the run to turn one.”

Verstappen took note of his rival’s DRS tactics but also the power of Ferrari’s hybrid system when pushed to the maximum. “Like Charles said you always try to have a good run with the DRS into the final zone, where then you have a lot of fast corners where you cannot pass. So Charles played it very smart there.

“But also it seemed like their defence [and] attack mode is very powerful. So, for me also, even more top speed. It was very hard to nail the overtake.”

On his third significant attempt, Verstappen finally executed the crucial move on Leclerc. Soon afterwards, Alexander Albon and Lance Stroll collided at the first corner, bringing out the yellow flags.

This was a double blow for Leclerc. Not only was a key overtaking spot on the track temporarily out of action, but the DRS zone on the pit straight was deactivated, preventing him from closing back up on the Red Bull driver.

“I tried to have the DRS in the last corner, it worked twice but it didn’t the last time, and then obviously there was this yellow flag,” he said. “I think the one where I could have had a chance to at least be alongside was the one into turn one I had no DRS there, so this was a little bit of a shame. But it’s part of the game.”

Now Verstappen sprinted for the line. “Once I was ahead it was really like four laps flat-out trying to stay ahead because Charles was consistently in my DRS,” he said. “It was quite tough out there.”

With one eye on the red car in his mirrors, Verstappen suspected Leclerc had not lifted as much as he did through the yellow flags on the final lap, and warned his team on the radio.

Immediately after the race the stewards noted three drivers may have failed to properly obey the yellow flags, but none of them were Leclerc or Verstappen, and no action was taken anyway.

Having been unable to make a pass stick on Leclerc in Bahrain, Verstappen got his own back in Saudi Arabia. He did it by throwing everything he had at his rival, on the track and on his radio.

NB. The transcripts above discount some routine messages such as those about gaps between drivers.

24 comments on “Transcript: How Verstappen fought Leclerc on his radio and on the track in Jeddah”