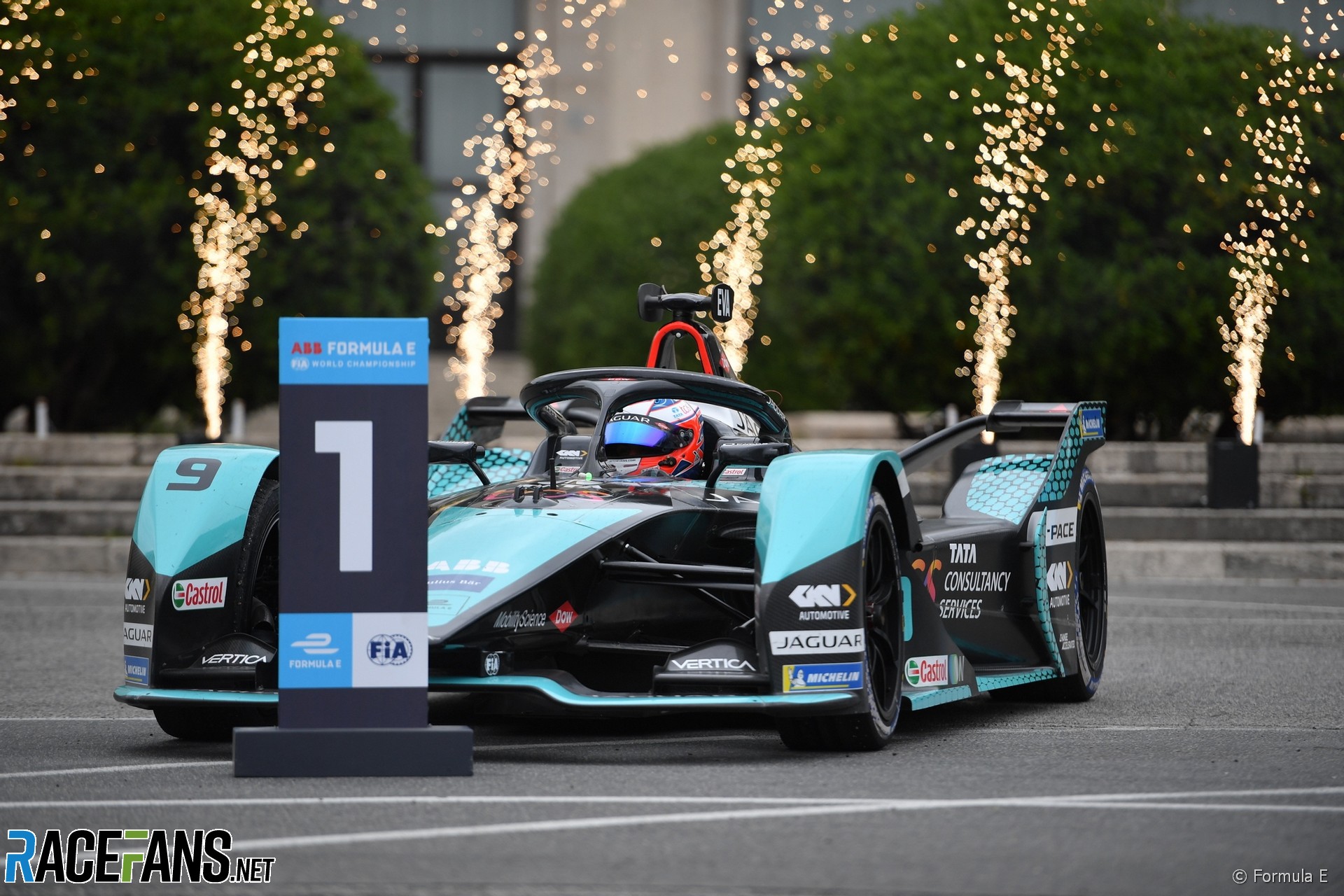 Mitch Evans took a clean sweep of Formula E’s two Rome races by winning the second EPrix of the weekend thanks to a very late use of Attack Mode.

Jaguar waited until the closing minutes of standard race time to take their single compulsory Attack Mode, later than their rivals. Evans used the additional power to catch and pass Jean-Eric Vergne and Andre Lotterer to take the lead in the closing laps.

Vergne finished second, with Robin Frijns securing a second podium of the weekend in third.

Vergne converted pole position into the lead of the race at the start, with Jake Dennis in second and Andre Lotterer also keeping his starting position in third. Behind them, the two Jaguars settled into fourth and fifth, Evans ahead of Sam Bird.

After a quiet opening sequence of laps, Lotterer eventually pulled an aggressive but clean pass on Dennis into turn seven to take second place. Evans emulated him on the next lap, passing Dennis in near-identical fashion to claim third. Not content with third, Evans passed Lotterer to move up to second and began to pull away from the pack behind.

Edoardo Mortara hit the wall on the exit of the final corner, causing him to pull off the circuit and into retirement. Then Antonio Giovinazzi came to a stop out on the track in his Dragon Penske, causing the Safety Car to be deployed so his car could be recovered.

After a very brief Safety Car intervention, the race restarted with Vergne leading from Evans. However, Evans soon muscled his way into the lead by passing the Techeetah around the outside with a bold move.

Frijns and Bird were the first of the front runners to take their one and only Attack Mode, with Frijns using the extra power to his advantage by passing Vergne and then Evans into turn seven to take the lead of the race, with Lotterer following through not too far behind to take second.

Vergne took his Attack Mode and fell to fifth behind Bird, while Evans bided his time in third place, opting to take his Attack Mode further into the race. Having activated his Attack Mode later than Frijns, Lotterer still had the benefit of the extra power after Frijns’ had expired. The Porsche was able to sweep past and into the lead of the race thanks to his superior top speed.

The Safety Car was deployed for a second time after Alexander Sims ran off the circuit and down an escape road into retirement. When the race resumed with just under seven minutes of standard race time remaining, Evans was the only driver in the field yet to take his mandatory Attack Mode.

After a lap at racing speed, Evans eventually took his attack mode from third, dropping only one place to Vergne in the process. With the speed advantage, Evans was easily able to pass the Techeetah and move back up into third.

With the leaders in his sights and over five minutes of Attack Mode power remaining, Evans wasted no time in dispatching Frijns for second, before slipstreaming by Lotterer’s Porsche and into the lead of the EPrix. Vergne used his Fanboost to pass Lotterer, before the Porsche driver lost another position when Frijns overtook him for third.

Into the five minutes of added time, Evans used his remaining Attack Mode time to begin pulling away from Vergne behind him. But then the Safety Car was called for a third time after Bird and Nick Cassidy made contact under braking for turn seven, sending the Envision driver into the tyre barrier.

The race got underway for a final lap before the chequered flag, but as hard as Vergne fought to put the Jaguar under pressure, Evans held on to take his second win in two days around the Rome circuit.

Vergne finished second, with Frijns completing the podium for Envision. Lotterer took fourth after Stoffel Vandoorne handed the position back to him due to passing him under the Safety Car, leaving the Mercedes drover fifth.