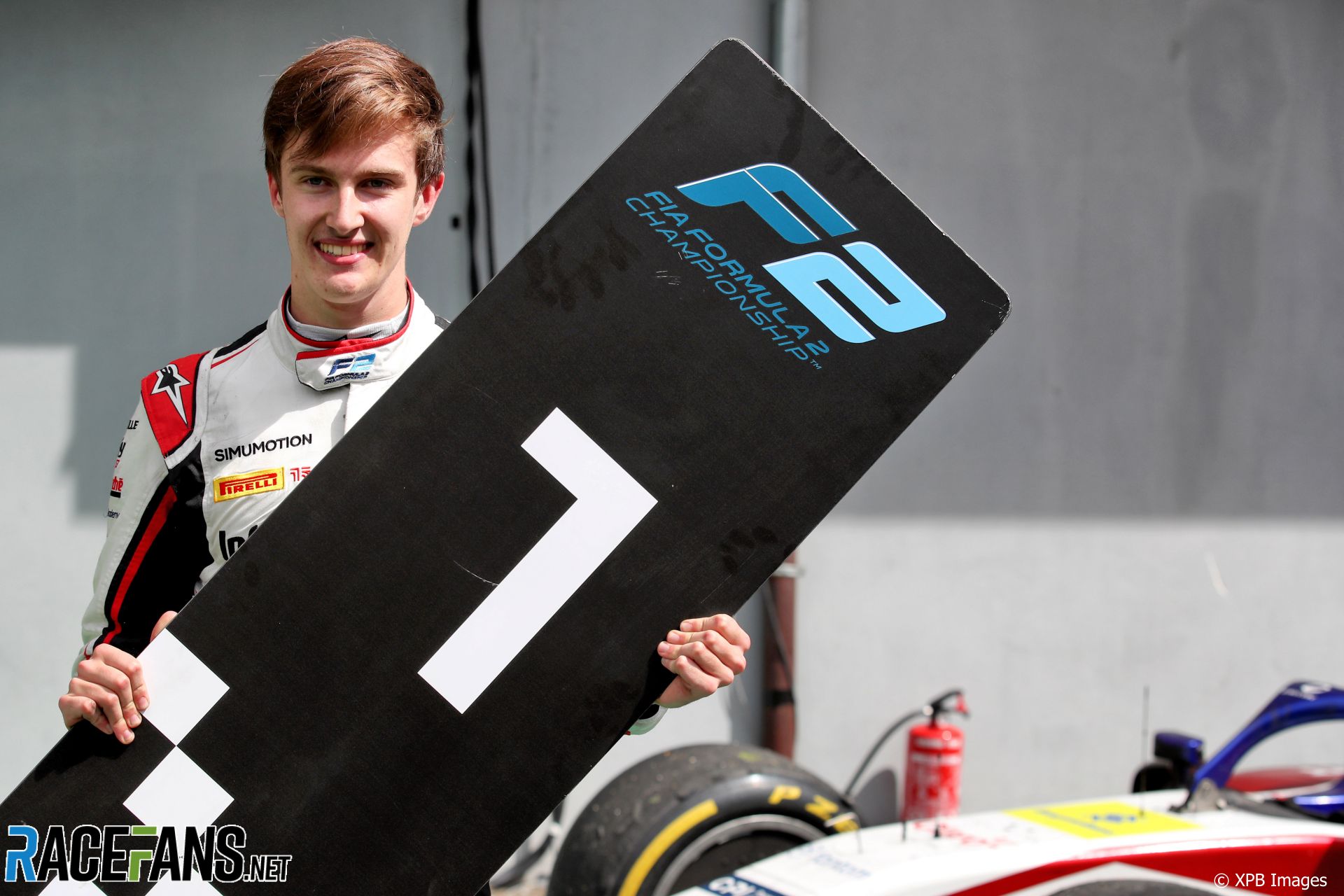 Théo Pourchaire won an incident-filled Formula 2 feature race at Imola in which several of his rivals crashed out.

Jüri Vips had taken pole during the disrupted, dark and mixed conditions qualifying session on Friday, Ayumu Iwasa lining up alongside him with Jack Doohan and Ralph Boschung on the second row.

Boschung was immediately into the lead off the line, only to be passed by Roy Nissany, up from sixth, into the first Tamburello. Iwasa held on to third, Vips relegated to fourth while Doohan was immediately out of contention with damage from colliding with first Dennis Hauger and then the rear of Vips’ car.

Hauger was left out of the race from the contact, his car stranded in gravel near the pit exit, prompting an immediate Safety Car to be called. Doohan managed to limp back to the pits but his race had effectively been ended by the contact before reaching turn one.

The race restarted on lap five, Nissany holding the lead from Boschung and Iwasa. Nissany, Boschung, Iwasa, Vips and Theo Pourchaire were all on the supersoft tyre, while Jehan Daruvala in sixth was the highest of the medium tyre starters, having moved up from eighth following Doohan and Hauger’s retirements.

Vips lost it into Villeneuve on lap six, hitting a polystyrene board and ricocheting back across the track to end his race in the barriers. Another Safety Car was called, with drivers on supersofts immediately heading into the pits at the start of lap eight. Daruvala inherited the lead and took the restart on lap 10, with sprint race winner Marcus Armstrong and Liam Lawson behind him.

The top ten on the restart was made up of drivers who had started on the medium tyre, bar Nissany in tenth, who effective still held the net lead of the race.

DRS was enabled on lap 12 but the pack stayed largely stable, bar Pourchaire passing Boschung for net second, until on lap 20 Nissany made an error that saw him clatter the wall out of the second Rivazza and into the pit lane entry.

For drivers on the medium-to-soft strategy, this proved potentially disastrous as Nissany’s car had shed debris into the pit lane entry, causing the pit entry to be closed and a Virtual Safety Car called. Formula 2 driver are not permitted to take their mandatory pit stop under a Virtual Safety Car but even if it had been upgraded to a full Safety Car, drivers could still take no advantage.

Green flag conditions returned on lap 25, Daruvala leading Armstrong away. Lawson pitted from third with 10 laps to go, coming out in 16th. Amaury Cordeel was issued a 5-second penalty for exceeding track limits, on lap 26. Cordeel was running in 14th at the time, outside the points. By lap 28 that had been added to with a 10 second penalty for the same offence and then given a further drive-through penalty.

Daruvala came into the pits on lap 27, coming out 14th with eight laps to try and take advantage of his supersoft tyres to re-join a points position. Drivers who had started on the supersoft had, at this point, been running their medium tyres for twenty laps and some drop-off was becoming clear.

Armstrong pitted on lap 28, for a disastrous stop that saw him come out 16th and over 30 seconds back from the points positions. On lap 29, Felipe Drugovich, Marino Sato and Olli Caldwell were in the podium positions, none of them having pitted from starting on medium tyres. Drugovich was told by the MP Motorsport pit wall to stay out.

Sargeant was able to pass Boschung through Tamburello on lap 31, taking net second from him and leaving Boschung to resist Enzo Fittipaldi behind. However, Sargeant made a mistake through the Variante Alta and slipped back, letting Boschung and Fittipaldi through and then falling down the order to ninth.

Caldwell finally pitted on lap 32, seconds before a virtual safety car was called, preventing cars from pitting, after Liam Lawson had clattered the barrier, spinning at the exit of Acque Minerali. A full Safety Car was called, but too late for Drugovich to take the pit entrance on lap 33.

Cordeel was then issued a further 10-second stop-go penalty for speeding in the pit lane, as drivers looked set to finish behind Safety Car. Drugovich finally pitted on lap 34, giving Pourchaire the lead from Fittipaldi and Boschung, with Drugovich’s team mate Clement Novalak having made the most of the Brazilian’s stint to move up the order. Drugovich himself emerged in tenth, with a potential point to show for his efforts.

The chequered flag was shown behind the Safety Car, with Bernd Maylander leading the drivers home. Pourchaire’s victory takes the lead of the championship for him, from Drugovich, while Fittipaldi’s second place is his first podium and first points finish of the season, Boschung moving up to fourth in the championship with third.