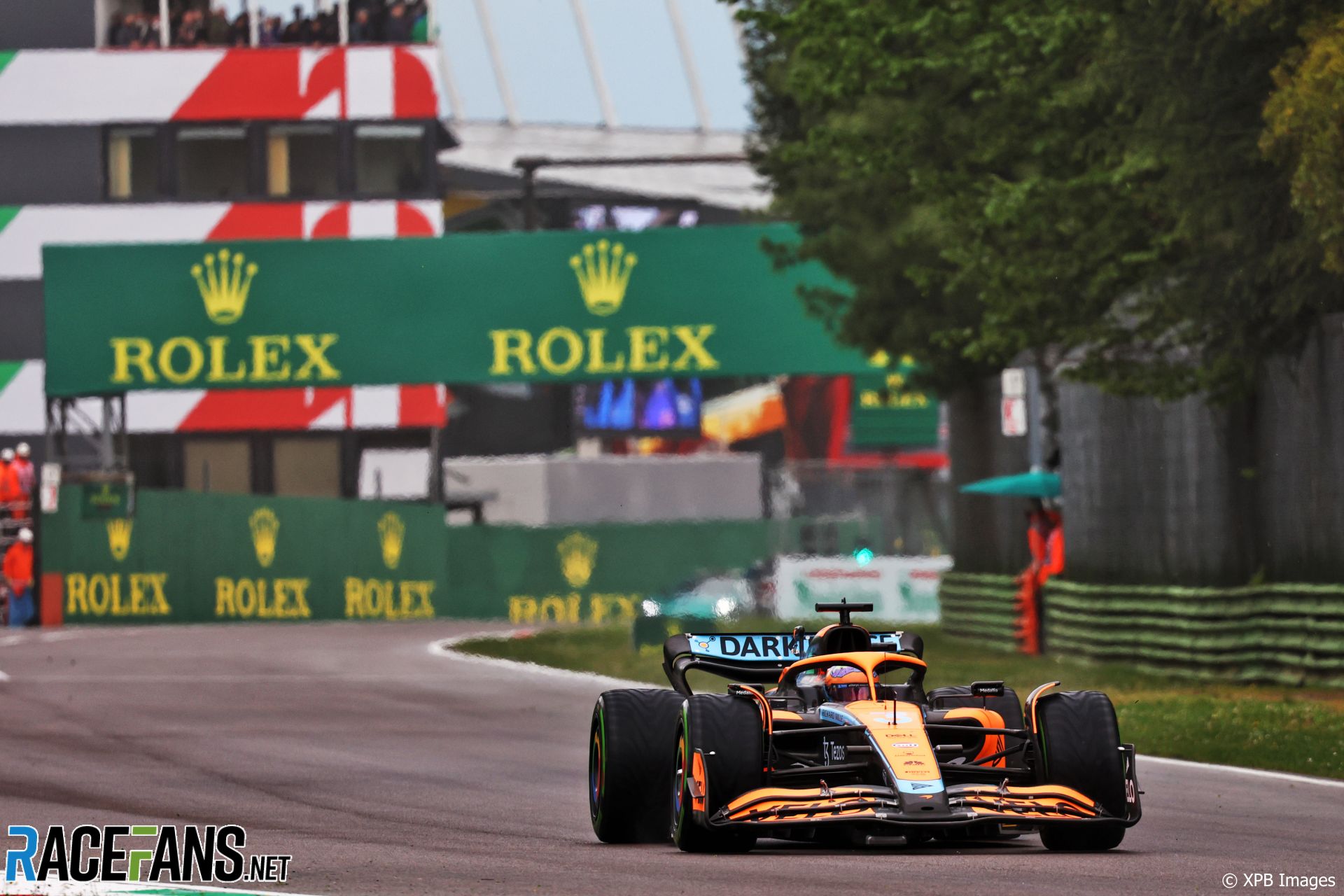 Formula 1 cars still need DRS to overtake each other despite the changes made to allow cars to follow more closely this year, Daniel Ricciardo believes.

Damp but drying conditions at the fourth race of the season at Imola gave some indication how closely cars could race each other without DRS and after it was activated. Race control gave the go-ahead for DRS to be used on lap 34, at which point several teams had already asked for it to be switched on.

Ferrari was one of them. As Charles Leclerc pursued the Red Bull drivers he was told on his radio his team had “asked for” DRS but that the “race director thinks turn two off-line is wet”. The corner – Tamburello – was the scene of a high-speed crash in similar conditions during last year’s race after DRS was activated.

Ricciardo made an extra pit stop before DRS was activated and ran near the rear of the field. He believes that despite changes made to encourage overtaking this year, F1 cars still need DRS to race well.

“Don’t get me wrong, the cars are better this year to follow, and there was a small improvement already [at Imola],” he said.

“But still, I don’t know, did anyone pass without it? You still need it. I know some people are not that much in favour of DRS these days, but I’m definitely still a DRS kind of person.”

DRS is still needed because cars don’t gain as much from following others on the straights this year, says Ricciardo.

“You can follow better, so you can definitely stay closer, but the slipstream effect is smaller than last year I feel, at least. So you do need DRS to make that straight-line advantage bigger. Although you can stay closer, you don’t get a crazy, crazy effect like maybe last year.

“But I think that probably changes track-to-track as well, depending on the size of wing cars are running. So I think it still needs it. Of course then you can shorten, length zones. They can play with the distance of DRS, but at least some distance is good.”

Alexander Albon also overtook Pierre Gasly without using DRS. But once DRS was activated it did not produce a sudden spate of extra passes. “For whatever reason even with the DRS I don’t know for what reason but this year was very tough to pass,” the AlphaTauri driver remarked.

Albon believes the nature of the Imola track explains why little passing occured before or after DRS was activated.

“I still think the cars are better for overtaking, better for for racing,” he said. “It’s just this track’s quite tricky.

“We only have one DRS point. Of course it’s not great to always have DRS overtakes, but this track’s hard. There’s not really a place where you can brake late and overtake it’s all quite quick, which stops the overtaking.”

Last year Max Verstappen suggested Imola should have a second DRS zone on the downhill run to the penultimate corner, a few Albon backed.

“I think we need a bit of a revision,” he said. “Maybe a DRS down the the straight before the last two corners or something as well. But it’s a tricky track this one.”