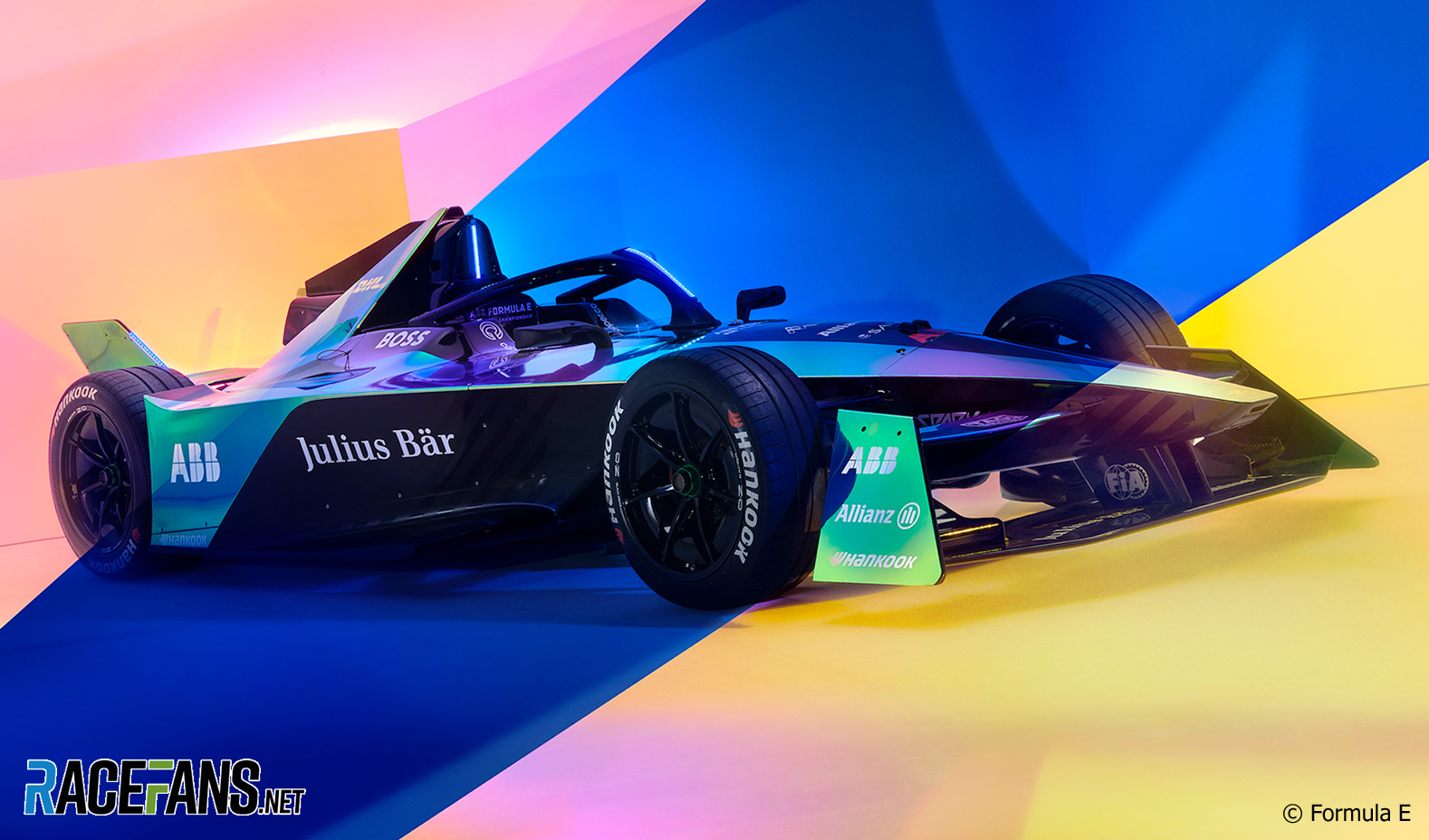 Formula E revealed the forthcoming new iteration of its car design in Monaco two weeks ago.

The ‘Gen3′ machine takes advantage of the series’ biggest progress point, regenerative braking. But can the delayed project keep up with developments in road car technology?

The new car is set to take to the track for the first collective testing in six months, with manufacturers able to start their own testing as soon as chassis are delivered to them. Until now, it has only been driven by one person – Benoit Treluyer – in Spark and the FIA’s own tests.

The step to Gen3 will increase top power output by 100kW relative to Gen2 and introduce regenerative braking on both the front and rear axles. However drive will only be permitted from the rear axle, at least at present. 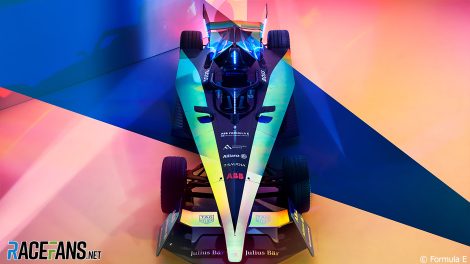 Electric road cars have been getting bigger – much, much bigger, in the case of monstrous creations like the 4,103kg Hummer EV – in an effort to extend range. Although a temporary fix, it’s inelegant and unsustainable.

Can motorsport – through series such as Formula E – drive forward efficiency and power while cutting weight, as it did with combustion cars in the last century?

Formula E’s Gen3 is smaller and lighter than Gen2. The heavy front wheel covers are gone, returning the series to a true open-wheel look. This should also reduce the destructive capabilities of the front of the car when it meets the rear of another.

Smaller and lighter is the opposite direction to the majority of race cars, especially as electric elements are being introduced to more series, and was a priority for Formula E in developing the Gen3.

The savings are not inconsiderable. FE cars were already smaller than F1 but Gen3 cars measure nearly 90mm less front-to-rear, are 70mm narrower and 26.6mm shorter. The weight has come down by an impressive 60kg to drop to a combined weight of 840kg with the driver.

Remarkably, this means that from 2023 onwards FE cars will start races lighter than F1 cars, when the latter carrying up to 110kg of fuel on top of a minimum driver and chassis weight of 798kg.

A smaller battery means regeneration and charging will become even more important to extend range. Currently, the highest amount of regen in any road car is 478kW in the Mercedes EQS luxury saloon. The majority of electric cars (in particular most Teslas) only regenerate at 70 to 90kW, the same as a Prius from 10 years ago. Formula E has gradually increased its own regenerative capabilities since the start, now allowing drivers to reclaim energy at 250kW – the Gen2 car’s maximum output in qualifying mode – regardless of what mode they are in.

Gen3 pushes that further, by only the front axle to regenerate power, not drive the wheels. However it is a full unit and could, eventually, be used for drive.

The rear axle increases power to a potential 350kW (469 horsepower) but the potential to reclaim energy into the battery more than doubles that of Gen2, using both front and rear motors for a combined 600kW regeneration.

The removal of rear hydraulic brakes sounds like a radical step. But arguably it is a sensible response to the fact drivers hardly use them in Formula E. Andre Lotterer told me in Monaco “it’s something we are already used to with Gen2: Except in qualifying, you top up what you need on hard braking, so it’s never been a problem. Now there’s just more regen available to slow down the car completely on both MGUs.”

Lucas di Grassi agreed that “we already race like 90% of the race without the rear brakes.” He believes one of the biggest challenges of the Gen3 car will be found on the front axle. “What concerns me a lot is having a driveshaft to the front axle, because from LMP times, with the Audi LMP1 I remember that was a very tricky setting to get the differential to work in a good way.

“So this would be very interesting to try and I think this will change a lot the driving style, you will have to brake a little bit more straight and then turn. If you lock one of the wheels it’s harder to unlock because you have to make the diff rotate to the other direction. So this for me, it would be interesting to see how it goes.”

Charging will now be delivered through a standard rapid charging port, with a possible format limitation on how much cars can plug in over the course of a race day. Mahindra driver Alexander Sims, who is an EV enthusiast and advocate and trustee of charging infrastructure charity Zero Carbon World, welcomed this.

“I like the fact that, as I understand it, they’re going to a CCS combo charging plug, which makes it more road relevant,” he said. “I always found it odd, with Formula E, how we had this proprietary connection to recharge the battery and so now it’s just having a road recognised charging plug.”

Many would have preferred Gen3 to arrive earlier in 2022, or last year. Presented as renders during pre-season testing last November, the first time a chassis was seen in the carbon fibre and metal was in Monaco. Mechanics swarmed it, eager to try and take measurements. Photographers had been given briefs more about the technical specifications that teams need to know than about the glamour of the car. Most images available, still, are renders.

There are serious global supply chain concerns for a lot of automotive materials, currently. Carbon fibre, especially, is in short supply and a small supplier (relative to a major manufacturer such as Toyota or the VW Group) like Spark-Dallara, needs extremely savvy planning to be able to negotiate around shortages. Spark are not the only suppliers involved in building the Gen3 chassis, with Williams Applied Engineering needing to build batteries and Atieva supplying the front-axle MGU, as well as countless others involved and equally saddled with supply chain issues, especially following the Russian invasion of Ukraine, where many electronic elements for cars are manufactured.

Nevertheless, teams are now in a race against time to be ready for the season. Especially as the format now depends on the outcomes of manufacturer testing.

James Barclay, team principal of Jaguar, said it was essential for manufacturers to gather data before potential changes to next year’s sporting regulations were agreed. “Although the car has had its testing via the FIA manufacturer, [for] the actual manufacturers themselves once we put our powertrains in the common chassis, the common front powertrain and the new battery it’s really critical that we validate all that with our own powertrain.

“Before we decide the sporting regulations, we really need to make sure that we’ve had the cars running and then the data that is generated from the on-track testing and the manufacturers will be really helpful in terms of shaping, getting that format right,” Barclay continued.

“So that’s the right kind of evolution as well, just to really validate our own testing, what the FIA have seen, what Spark have seen and Williams have seen on the battery side. And we’ll be then able to take our data and put together I think enough information for the FIA, Formula E and ourselves to help shape it from a sporting point.”

Mahindra were the first manufacturer to sign up for Gen3, during pre-season testing in 2020. At the time, no one had seen the car – it hadn’t even been designed – and Mahindra’s faith in the series was unfortunately undermined by first Audi and then BMW announcing they would leave the series at the end of the 2021 season.

Audi and BMW are luxury manufacturers, a different proposition to Indian giant Mahindra. Although Formula E uses race car technology, the principles of what it should be developing, from its inception, are mass-market electric cars. Most of the manufacturers in Formula E currently, bar Nissan, only offer luxury or performance EVs and the resistance to increasing battery size (and cost and weight of vehicle) is an important factor for Gen3’s ongoing road-relevance.

“For us the relevance is a lot more because we are, in developing markets, maybe six or seven years behind the advanced markets in electric mobility,” Mahindra team principal Dilbagh Gill said, at the Gen3 launch. “So this decade is very relevant for us, 2020 to 2030. A lot of technology that we see on these cars can get transferred back to other products.”

Andretti team principal Roger Griffiths said the car gives Formula E a valuable point of difference to other series which are only now beginning to incorporate electric power. “When we compare the Gen3 car to other racing championships which are now starting to think about electrification, this was a clean sheet of paper design,” he said. “What [other series have] done is just, ‘oh, we’ve got an existing product, let’s bolt on a hybrid system’ or whatever. So all they’ve done is just add weight and complexity.

“I think what they’ve achieved here is quite a testament to that vision compared to the way others have approached it of it’s just an add-on,” Griffiths continued. “It almost feels like ‘oh, we need to jump on the hybrid or the electrification bandwagon’ rather than truly believing in this is the direction. So I think that’s been the real difference between how this car has evolved and anything else that’s out there.”

Gen3 presents a potential new beginning for Formula E, after Covid disrupted the strong start it had to the Gen2 era. While risks remain high for the young series, with the right race format and showcasing the road relevant, impressive technology of the cars there is a chance to regenerate its own profile and reputation with its third era.