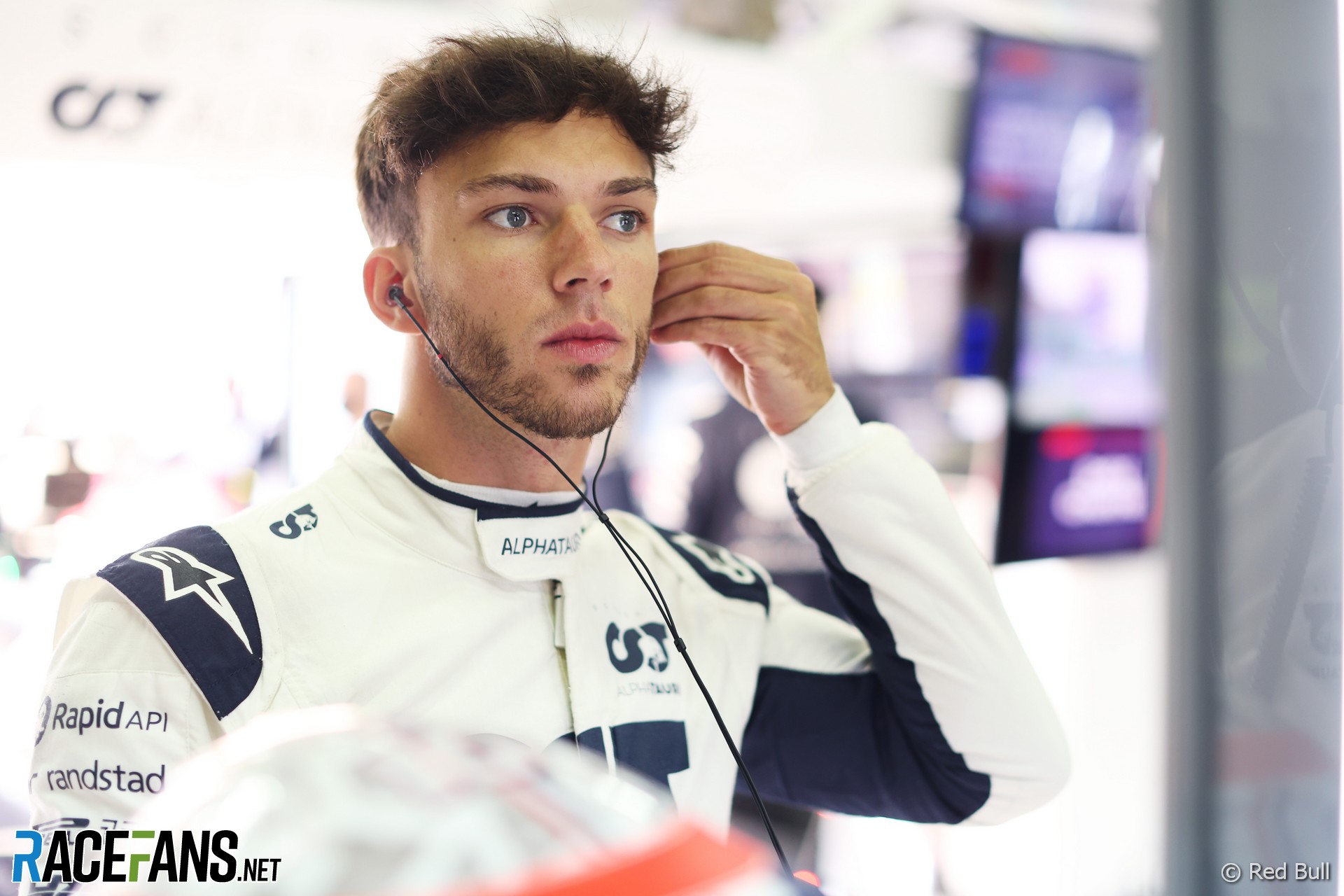 In the round-up: Pierre Gasly says hopes AlphaTauri will have their first “clean weekend” of the season in Barcelona.

AlphaTauri are currently seventh in the constructors’ championship with 16 points but have not brought significant upgrades to the AT03 for this weekend’s race. Gasly says he is more concerned about the team enjoying a trouble-free weekend than a lack of updates compared to their rivals.

“I haven’t really read so much about which team is bringing what,” Gasly says. “It’s more like trying to look at ourselves over the last few weekends – what went well, what went wrong. How can we just maximise because I feel like so far in this season we haven’t really had a clean weekend.

“For various reasons we never really managed to just get a clean qualifying, clean race, no issues and maximise the points at the end of the day, which is what we’ve got to do. In the midfield, we’ve got six cars which are able to finish between seventh and tenth, so it’s quite difficult, but at the same time it’s a good challenge and it just puts more pressure on ourselves to deliver at a higher level.

“Like last year, even sometimes we’d perform at 98-99 percent of our potential and still be there. This year, I don’t feel we’ve got that buffer compared to last year. We just need to be excellent every single time, especially if we want to score the points.”

Andretti Formula E team principal Roger Griffiths admits the team have had challenges adapting to the loss of BMW’s resources after transitioning from a factory team to an independent one.

Andretti are still running a BMW powertrain, with there having been a single homologation for the 2020-2021 and 2021-2022 seasons. However, the German marque left the series at the end of last year and the team has since struggled to find similar performance, despite retaining some access to BMW simulation and engineering facilities.

The team started the 2022 season relatively strongly, with a third-place podium for Jake Dennis and a points finish for rookie Oliver Askew in the first Diriyah race. However, Dennis has struggled to score more than a handful of points and Askew has been unable to find competitive pace ever since.

“I think it’s down to us as a team that’s transitioned from a factory BMW team to an independent team,” explained Griffiths. “We don’t quite have the resources that we used to, we’re learning more about how to operate the car on our own.

“With that learning there’s always going to be one or two instances which don’t always work out. I think we got caught in Rome with the pace in the cars there and how that evolved and we just didn’t make enough. We reacted quite well in in Mexico City but, ultimately, there were other challenges we were facing there that held us back a little bit. But we’ve been making progress every time. So every time we come away from a race, we’ve understood the deficiencies that we’ve had perhaps, and how to work on them and make improvements.”

Hitech GP founder Oliver Oakes says he is has been impressed by how quickly Red Bull junior Isack Hadjar has adapted at the team so far in this year’s FIA F3 championship.

The 17-year-old is part of the Red Bull Junior Team and is competing in his first season in the FIA F3 championship. Hadjar finished in third place in this year’s Formula Regional Asian Series with the team before stepping up to the FIA F3 championship, where he sits fifth after four races having won the opening round in Bahrain.

“I think Isack has been a bit of a surprise,” Hitech boss Oakes said. “Last year we had two really talented rookies and it was evident to us that they were going to be really good, finding their feet. What’s surprised us with Isack is that he’s found his feet a lot quicker.

“I think the bit that’s surprised me, more than his results, is just really how seriously he takes it, how much he studies with his engineer and that’s really nice to see at that age. Because normally that’s the battle, really, as a team – trying to make them realise that at the level of F3 and F2 you can be as talented as you want but all the details matter. Your track positioning, your tyre warm up – it’s all so difficult with 30 cars and I think how he’s handled that so far has been really impressive.”

Amazing to experience my first test day in a @F1 car. For something I’ve been dreaming of ever since I was a little boy to become a reality was very special and I can’t thank @AlpineF1Team enough for giving me this opportunity. pic.twitter.com/YLVzeSYGSw

Now to figure out how to use the scissors 🤔💇‍♂️👨‍🦲 pic.twitter.com/ypd1FYLmkt

Formula 1 aims to be Net-Zero Carbon by 2030 from factory to flag. Together with key stakeholders, including promoters, we are working to leave a legacy of positive change wherever we race.

Please can we chill out on calling drivers who are over 35 Veterans all the time. They are DRIVERS… did Mario and AJ when they were driving in their 50’s have to listen to the same weird lingo . “ Veteran Ed.. Veteran TK .. Veteran Scotty . It’s bizarre.

"It is understood that Hamilton's team mate George Russell drove the revamped Mercedes at a behind-closed-doors test on Wednesday."

'Welcome to my world, Lewis!' Fernando Alonso on life in F1 (BBC)

"One Lap for Mind will be a fundraising challenge where participants can walk, run or cycle 5.9km – the distance of one lap of the Silverstone circuit – between June 27 and July 3, either going the full distance in one shot, or breaking it down into stages."

Jamie Chadwick interview: ‘Breaking into F1 as a woman is not about gender, just money' (Evening Standard)

"Of course, I’d like to be in Formula 1. That’s the ultimate goal and there’s a long way to go. I’m realistic in what I need to achieve and I know there’s still a lot to achieve. It puts the pressure on me but I’m confident it’s possible."

"I looked on the map and knew it was near to some of the major F1 teams, which made me think I might be able to secure a placement at one of them – and here I am, now studying for a Master’s and working for Mercedes F1."

"When Juan Manuel Fangio arrived at the Indianapolis Motor Speedway in 1958, he did so to a massive amount of fanfare. He was already a celebrated F1 Champion, and he was one of motorsport’s most revered drivers. Unfortunately, his Kurtis Kraft machine just wasn’t up to par, and Fangio failed to reach a competitive speed."

"Taking place between 26-30 October 2022, around 80 nations are expected to compete representing the individual FIA (Fédération Internationale de l'Automobile) National Sporting Authorities (ASNs) from each country. They will race in a vastly expanded programme of 17 disciplines spanning the motorsport spectrum, staged across the three locations of Circuit Paul Ricard, Veynes and St. Baume."

After Carlos Sainz Jnr claims the FIA failed to react to his pleas to add a TecPro barrier at the Miami chicane after his heavy practice accident, @kerrymaxwell is pretty sure of why the governing body did not seem to share his concerns…

He wasn’t wearing an earring, so the FIA didn’t think it was a serious issue…
@kerrymaxwell