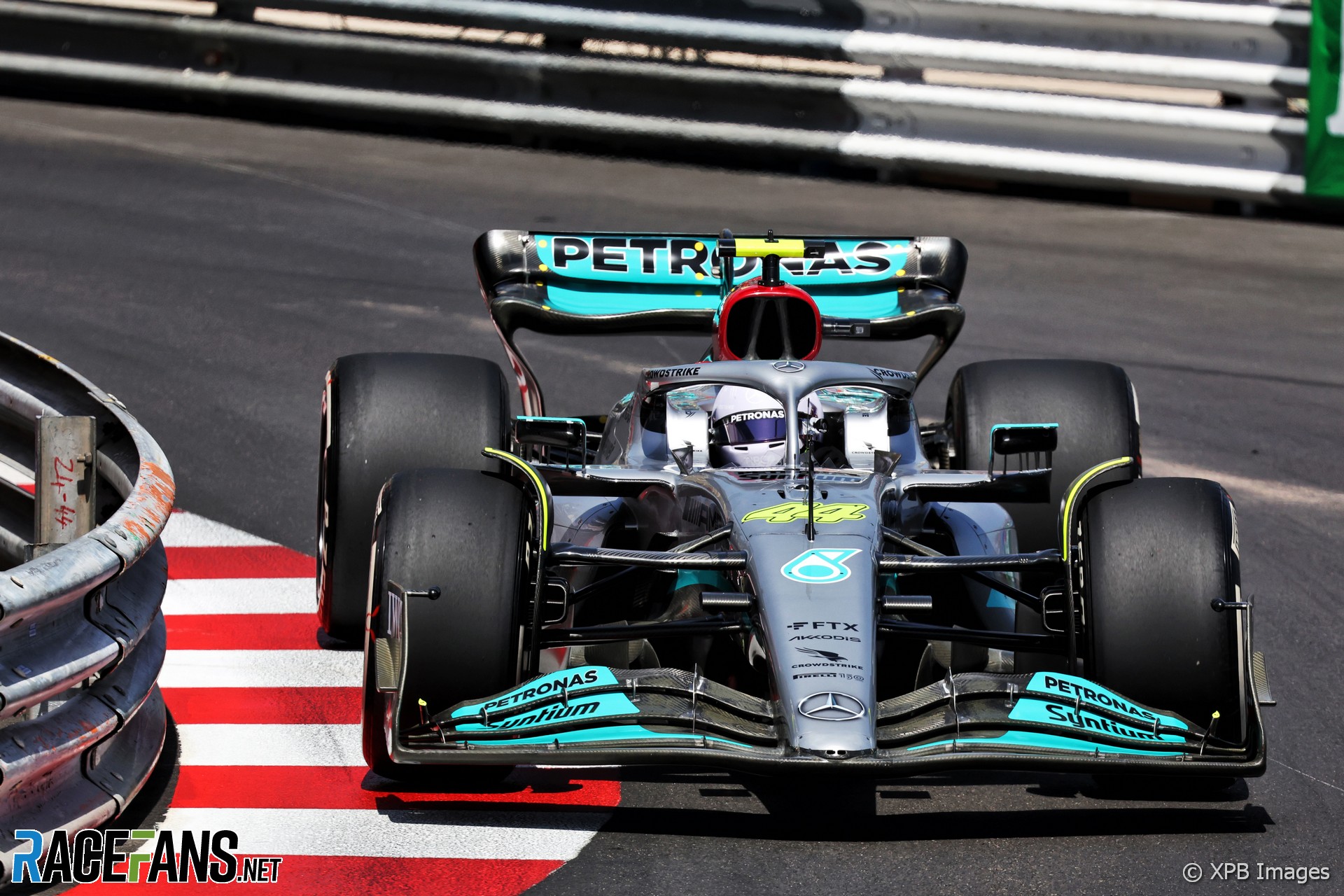 Lewis Hamilton says his Mercedes have encountered a new kind of bouncing they need to fix in practice for the Monaco Grand Prix.

But although he was only 12th-quickest in second practice, Hamilton’s team mate George Russell set the sixth-fastest time, and the world champion can see potential in his car.

“I just didn’t get to put great laps together,” said Hamilton. “A good sector one and two’s almost there and then three wasn’t there. I think the best laps of the day were really like P1, the first few laps.

“We’ll study the data, we’ll try and figure out how we can improve the bumps and really hope for a better day together. It feels like the car’s almost got the potential to be almost up there with the guys but there’s all these things that are just kind of hindering.”

Hamilton complained about the discomfort he experienced due to bumping at several times during practice. He said afterwards the track felt “the bumpiest the track’s ever been.”

“It’s probably the bumpiest track I’ve ever driven,” Hamilton explained. “So that makes it difficult but [also] just generally our car bounces a lot.”

While Mercedes said they had successfully addressed their porpoising problems at last week’s Spanish Grand Prix, Hamilton says they have encountered a different kind of bouncing around the unusually slow Monaco track.

“It’s different bouncing to what we’ve experienced in the past,” said Hamilton. “It’s a lower speed also but it’s not aero, I think it’s just the bumps on the track are making it worse.

“But otherwise it’s not really having to learn the track different it’s just fighting the car. To put a lap together is, wow, holy crap, it’s a lot different. I don’t remember experiencing it like that before.”

He said the track felt like “the bumpiest rollercoaster ride at the moment.”

“I think the locking I was having through the car is on the ground, on the deck. So we’re going to have to figure out how to get around that with the set-up. And then down the straights there’s some bigger hits.

“It’s different to when we were having bouncing, hitting – it is bouncing but it’s a different kind of feel. It’s like 100 bumps in just one straight. I don’t know how it is for the others, whether or not they’re experiencing the same as us.”

Hamilton believes part of the bouncing problem is caused by the sheer weight of the cars. The minimum weight has risen to almost 800 kilograms this year, and some teams have not been able to build their cars to that level.

“I remember back in the day, my first years here, just a light, nimble car, going around was so much better,” he said. “But now we have these super-heavy cars, they’re heavier than ever before, braking zones are different. It’s crazy that in 2022 the tracks aren’t as smoother when they’ve been resurfaced. Technology is still against us.

“But as I said putting a lap together is difficult. I think we made some improvements going into that session. It doesn’t even feel like, when you try to put a lap together, the grip doesn’t feel terrible, it’s just like your eyeballs are coming out of the socket.

“So we’ve got some work to do overnight to try to do that, as anticipated. I didn’t think we would be as quick as the Ferraris and the Red Bulls, our battle is trying to stay ahead of the McLarens I think.”