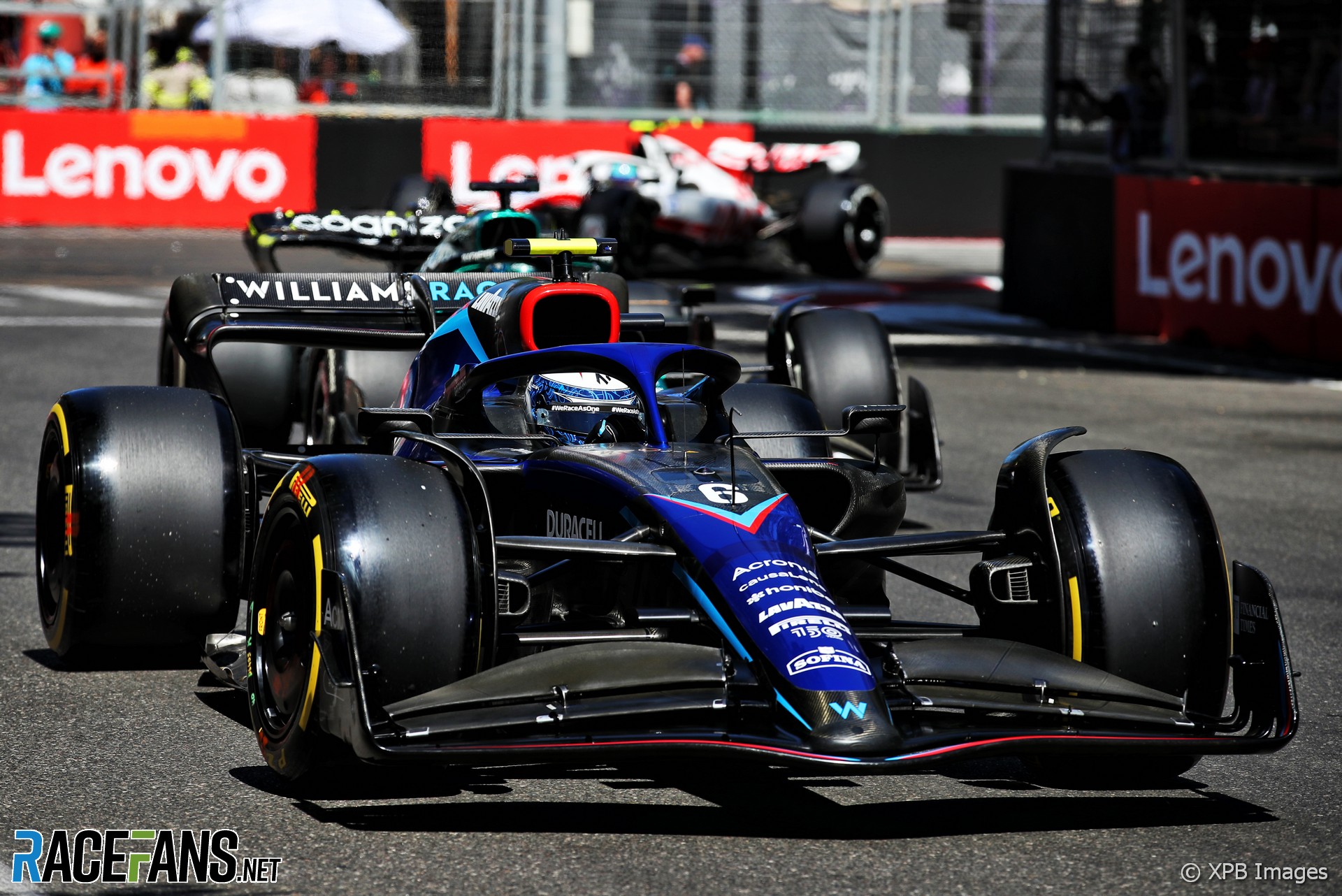 Nicholas Latifi was handed a five-second post-race time penalty and one penalty point on his super licence for ignoring blue flags in the Azerbaijan Grand Prix.

However the Williams driver insisted he had been trying to help Pierre Gasly, who was trying to lap him at the time.

The Williams driver was deemed to have failed to yield for Gasly during the race by the stewards after passing 12 blue lights shown on marshals’ posts between turn seven and the start-finish line at the end of lap 42.

Gasly was under pressure from Lewis Hamilton for fourth place when the pair came behind Latifi, who was running last. Despite multiple blue flag warnings, Latifi failed to yield.

He was investigated by the stewards for breaching Appendix H, Article 2.5.5 E of the FIA’s International Sporting Code, which outlines that when receiving a blue flag, a driver “must allow the following car to pass at the earliest opportunity.”

The stewards found Latifi was in violation of the rules and handed him a five-second time penalty. It was eventually added to the end of his race time, though as he finished last it made no difference to his final result.

“Car six [Latfi] was shown the blue flag on multiple occasions,” the stewards confirmed. “The blue lights were displayed for 12 panels, between turn seven and the finish line, prior to car 10 [Gasly] being able to pass.”

However, speaking to media including RaceFans after the race, Latifi explained he had not pulled over to allow Gasly by in order to ensure he did not leave the AlphaTauri driver completely exposed to Hamilton behind with DRS.

“The blue flag [penalty], I understood I took longer than maybe in terms of the marshalling sectors to let him by,” Latifi said. “But I spoke to Pierre after, telling him what I wanted to do and he agreed with what I did.

“I just basically wanted to give him the DRS, because if I let him by a few corners before then he was going to have no DRS and he was going to get penalised from Hamilton catching him through that dirty air up before.

“So I said ‘okay let me at least give him the DRS and try and negate whatever I held him up and he agreed. He said ‘yeah you did the right thing’.”

Latifi was also given a penalty point on his super licence, putting him on a total of four. At the previous race in Monaco he and team mate Alexander Albon were accused of holding up the Ferrari drivers while being lapped, but neither incident was investigated by the stewards.

The five second penalty was the second that Latifi was hit by during the race after serving a 10 second stop-go penalty in the early laps due to a starting grid infringement when a Williams mechanic was on the grid beyond the deadline allowed by the regulations. The penalty left the Williams driver half a minute behind the nearest car of Mick Schumacher in 19th.

“It’s unfortunate that the penalty undid everything before it even started,” said Latifi. “I feel like there should be some leniency applied for what the infringement was as I was just pushed back, and nothing was changed to the car.

“It was tricky being so far off from the pack then the cycle of blue flags and getting caught by the leaders very early on. The race ended up being a very long and lonely one.”