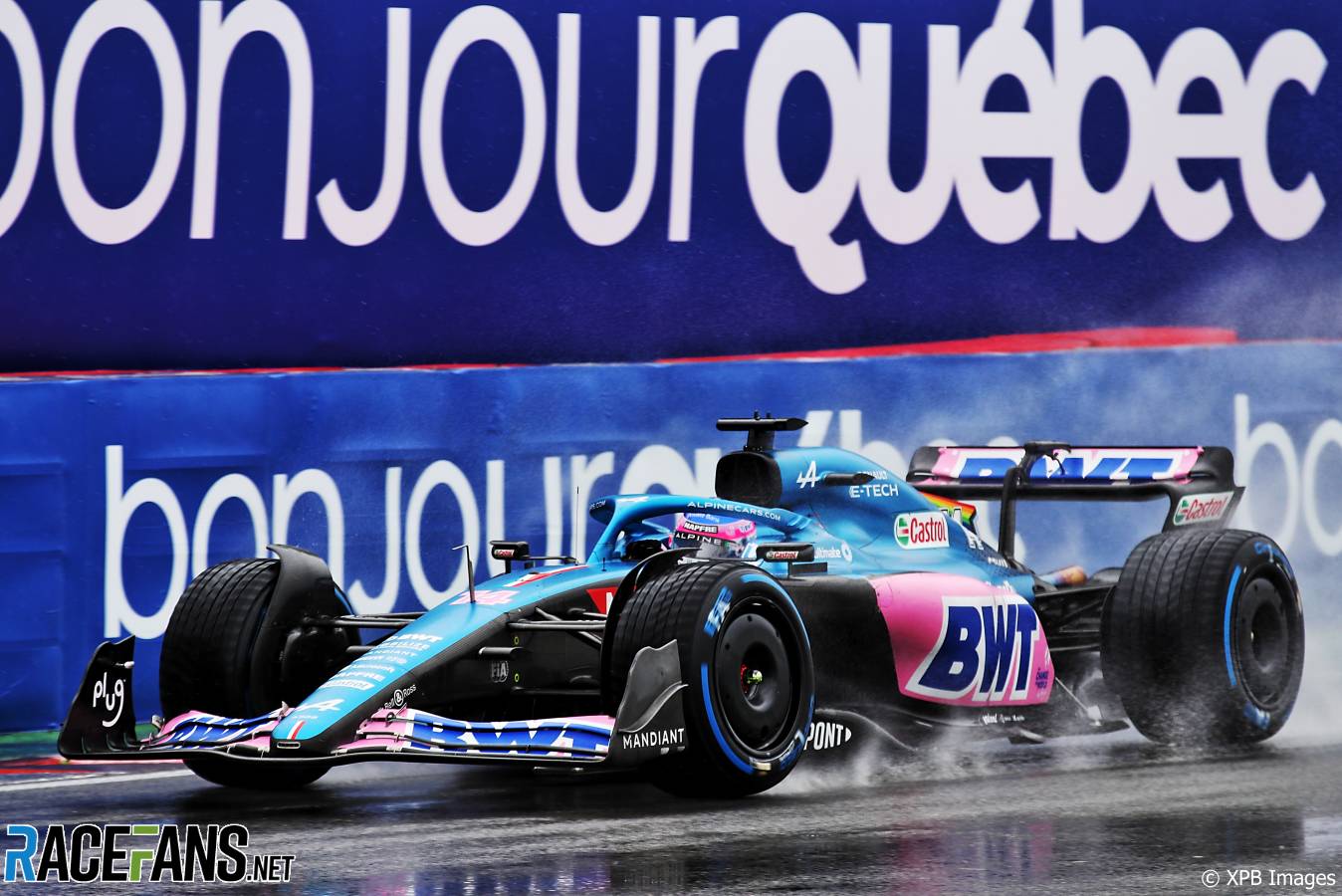 Fernando Alonso was quickest in the final practice session for the Canadian Grand Prix, which was run entirely in wet conditions.

The Alpine driver used intermediate tyres in the closing minutes to set the best time of a 1’33.836, just over five hundredths of a second quicker than the AlphaTauri of Pierre Gasly. Sebastian Vettel was third fastest for Aston Martin, ahead of Esteban Ocon in the second Alpine.

Following regular storms and heavy rain over the previous two days, the track was sodden when the final practice session began. In conditions requiring full wet weather tyres to begin with, only the two Alfa Romeos and the two Haas cars went out at the start of the session.

They were soon joined by the Ferraris of Charles Leclerc – now doomed to start the race from the back of the grid – and Carlos Sainz Jnr as well as the Aston Martins of Lance Stroll and Sebastian Vettel. All drivers tiptoed around the soggy course, kicking up large rooster tails of spray into the air as they did so.

Unsurprisingly, many out on the track struggled to find grip on the soaked surface. Sainz slipped off the track at the turn eight and nine chicane, before Yuki Tsunoda did the same not long after. Kevin Magnussen ran over the grass at turn three, while his team mate Mick Schumacher ran off at the hairpin. Sebastian Vettel also missed the first corner while searching for grip. All drivers were able to continue.

Vettel completed eight laps in the wet, setting the fastest time of a 1’38.294 before returning to the garage. Tsunoda then improved to go quickest of all by three hundredths of a second, before running off the circuit at turn one on the next lap.

Sainz went two seconds faster than anyone else to go quickest of all with a 1’35.858, before Alonso jumped into second place going within three-tenths of the Ferrari. Alonso had a couple of off-track excursions before he sought the solace of the garage.

With half of the session gone, only the two Mercedes, two Red Bulls and Leclerc’s Ferrari had yet to set a lap time. Max Verstappen ventured out to have a go in the conditions, but pitted before completing a flying lap.

Vettel returned to the track after a spell in the pits and improved by three seconds to retake the fastest time, 0.037s faster than Sainz and Alonso. With under 20 minutes now remaining in the session, Alonso was the first driver to take to the track on intermediate tyres. However, his first flying lap was almost 2.5 seconds slower than his personal best.

Alonso’s next effort was far better and he jumped to the top of the times with a 1’34.836. Sainz was now out in the Ferrari on the intermediates and he used them to improve to second, albeit seven tenths slower than Alonso. That was until Vettel came out on the intermediates to go fastest by three tenths over the Alpine, before Alonso took back the top spot by half a tenth.

Magnussen brought out the yellow flags in turn two after running off at turn one, continuing over the run-off and coming to a stop by the barriers. Fortunately, Magnussen managed to reverse his Haas out of the grass and continue. Soon after, Verstappen had a spin on his way around turn two, but again avoided the tyre wall before recovering on his way.

With the track conditions worsening, there were limited improvements in the final minutes. Alonso therefore ended the session fastest overall, ahead of Gasly who jumped up to second at the chequered flag, just half a tenth behind.

Vettel ended the session third fastest, with Alonso’s team mate Ocon in fourth. The McLarens of Daniel Ricciardo and Lando Norris were fifth and sixth, ahead of George Russell’s Mercedes. The two Red Bulls of Perez and Verstappen were eighth and ninth, with Sainz completing the top ten.