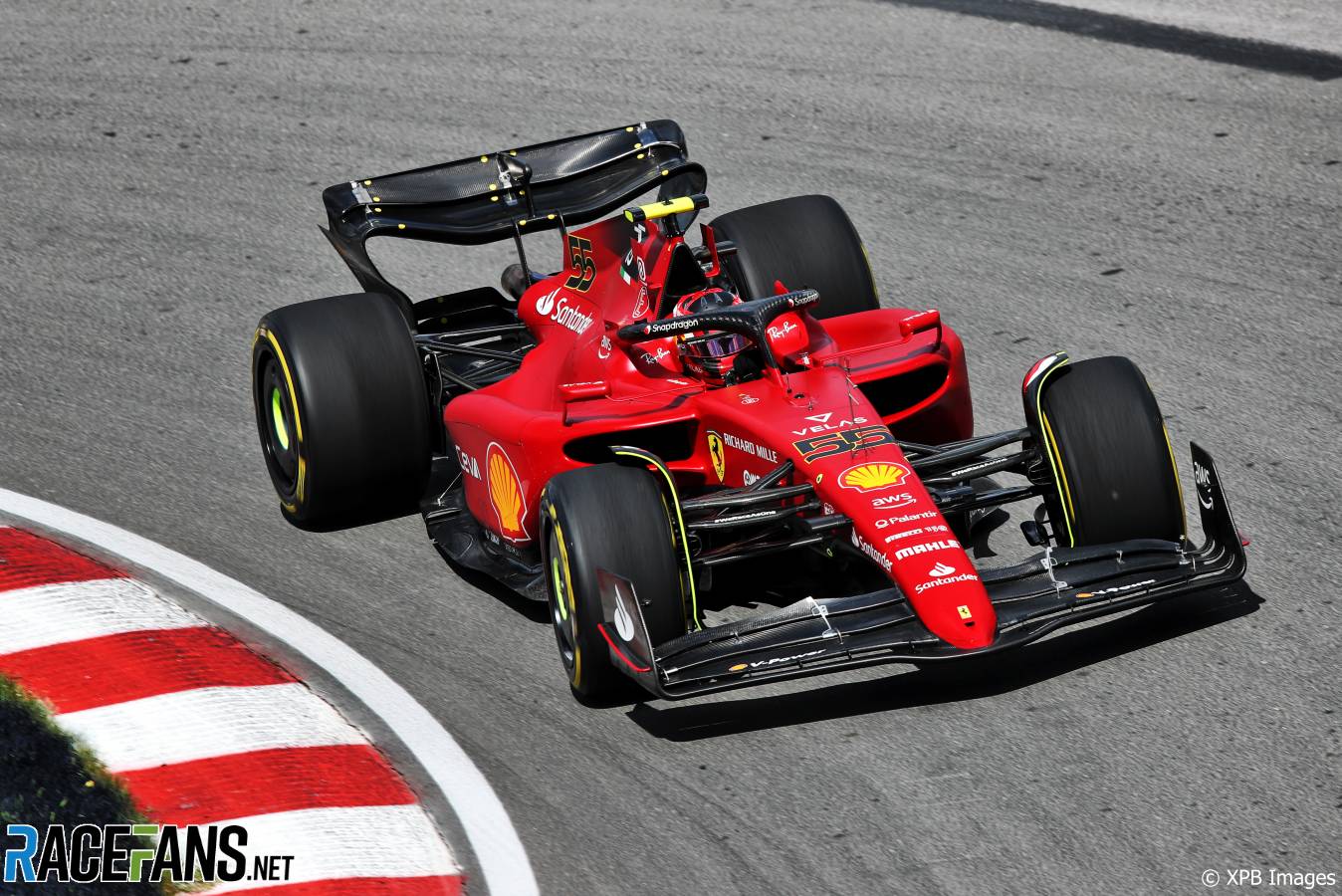 After the first run in Q1 at the Circuit Gilles Villeneuve, Montreal last week, Carlos Sainz Jnr sat on top of the times.

But choosing not to take a tow on his final run, and an error early in his lap, allowed team mate Charles Leclerc to take pole position, followed by the two Red Bull drivers.

This weekend, Sainz is Ferrari’s best hope of stopping Red Bull from claiming a sixth consecutive victory. Leclerc has a 10-place grid penalty for exceeding one part of his power unit allocation.

Max Verstappen headed both practice sessions on Friday, looking supremely confident and comfortable at the wheel of his RB18 as he did. That ease at the wheel is vital at a track like this, where drivers have to commit to a series of rapid changes of direction at high speed, riding the kerbs as they do, and staying clear of the ever-present barriers.

Sainz lacked that natural confidence earlier in the season but has been building it up with a series of solid performances. He’s restrained himself from putting too much on the line in final practice, as he did in Miami.

After ending practice two-tenths of a second behind Verstappen – Leclerc was within a tenth – Sainz said he is hopeful Ferrari can close the gap in qualifying. “Max looks to be very quick this weekend,” Sainz admitted. “He’s on it since the beginning.

“I think we are playing a little bit of catch-up right now to him in both in one-lap pace and in long run. But I think with the steps that we normally do into Saturday and Sunday, we can get ourselves up there.”

One driver who did look at ease with his car was Sebastian Vettel, who put the Red Bull-apeing Aston Martin AMR22 fourth on the times sheets, three-tenths off Verstappen. Coming off the back of his best result of the season so far last time out, Vettel appears to have finally clicked with the team’s updated car and is showing flashes of his old verve.

“Overall we got a nice rhythm and I was able to play with the car today so it felt pretty good,” he said. “I’m pretty sure [on Saturday] we need to be realistic and see what we can get but for sure it was a good day.”

Replicating fourth place in a dry session may be a tall order, but there is a strong chance drivers will face trickier conditions in qualifying. The risk of significant rainfall is above 50%.

That may be bad news for the drivers who are already struggling with their cars in dry conditions. Despite setting the sixth-fastest time, Pierre Gasly admitted it was “extremely difficult” to lap consistently.

Lewis Hamilton said it was hard to keep his ill-handling Mercedes out of the barriers. However he was trying another of Mercedes’ radical set-up experiments, involving what team mate George Russell described as one of the biggest differences between their configurations so far this year, and his W13 may prove a different proposition in a more conventional trim.

In dry conditions the competition for a place in Q3 looks fierce. Just half a second covers half the teams in the midfield, and Alfa Romeo’s potential was likely disguised by yet another technical problem for the team, which kept Valtteri Bottas from setting a time in second practice.

One team which tends to slip backwards from Friday to Saturday is Alpine. But having been fourth-quickest in the times yesterday, Esteban Ocon is confident they can breach the top 10 in qualifying. “The car will be good for Q3 tomorrow,” he said on Friday. “That’s the aim.”

Will Leclerc be part of that fight? Last year, when drivers had to start the race on old tyres if they reached Q3, he would have had a strong disincentive not to reach the final round of qualifying. That’s no longer the case.

If his penalty remains at 10 places, he will aim for the best qualifying position possible in order to improve where he starts from. But there may be more to follow if Ferrari fit a complete new power unit to his car today to stock up on fresh parts, as rumours suggest they might.

In which case, if qualifying is dry, Ferrari’s best incentive to keep him on track could be to lend his team mate the tow he could have done with in Baku a week ago, and boost the team’s chances of beating Red Bull for the first time since Australia.