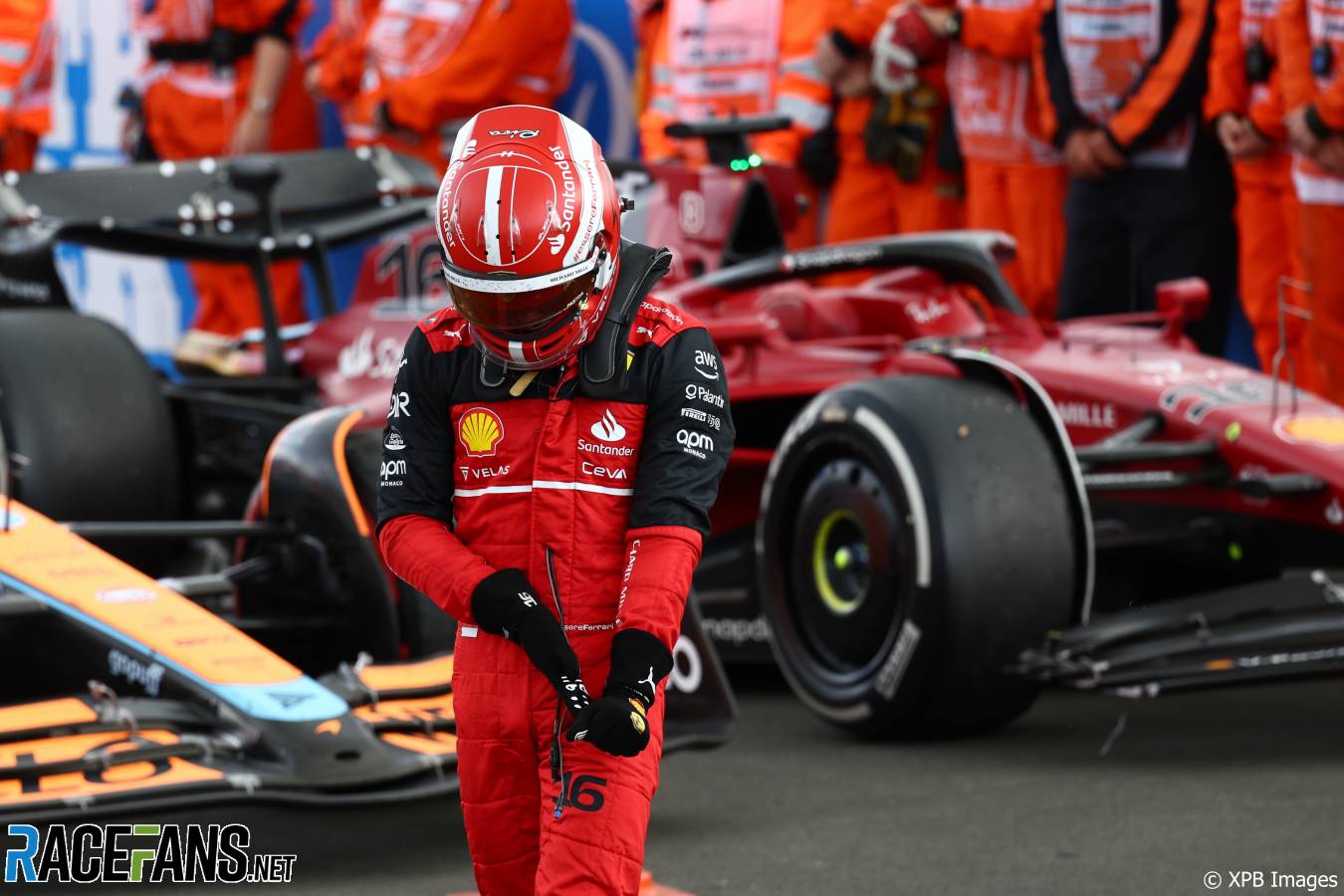 Ferrari team principal Mattia Binotto says fears of losing time double stacking in the pits led them to tell Charles Leclerc to stay out under Safety Car in the British Grand Prix.

Carlos Sainz Jnr won the race at Silverstone after Charles Leclerc was told to stay out under a late Safety Car while leading, which left him vulnerable to his team mate who pitted for fresh soft tyres. Sainz overtook his team mate when the race restarted and went on to win, while Leclerc dropped to fourth by the chequered flag.

Leclerc and Binotto were seen having an intense conversation about the call in parc ferme after the race. Binotto explained Ferrari were unhappy that Alpine did not tell Esteban Ocon to stop his car earlier on the circuit before he pulled off at Copse corner, prompting the Safety Car.

“It’s obviously disappointing for Charles, the Safety Car at the end with Ocon stopping in the middle of the track – I think he could have stopped somewhere else, because there was time to stop somewhere else,” said Binotto.

Ferrari were concerned about losing time double stacking both cars in the pit lane, Binotto explained, which led them to tell Leclerc to stay out and retain track position with the lead.

“Why did we decide to stop Carlos? Because Charles got track position – he was leading, so he would have remained the leader of the race,” said Binotto.

“Here what happened is our two cars – in our view, certainly – were too close to stop both of them, so we had to take a decision.

“We were the only ones out there having the two cars fighting for the good positions. The other teams got only one car, so certainly the decisions are a lot easier. In our case, we got the two cars and we saw that there was not sufficient gap to stop both of them, because the second would have lost time at the pit stop and would have fallen back on track.”

The choice of pitting Sainz over Leclerc was driven, in part, by concerns over the lifespan of the soft tyres, Binotto said.

“Then we were hoping for more tyre degradation on the softs to give Charles, yes, maybe a difficult three or four laps initially, but then recovering later on but the softs didn’t degrade as we were hoping.”

Prior to the Safety Car restart with ten laps remaining, Sainz resisted calls from Ferrari to build a buffer of ten car lengths to Leclerc – the maximum distance allowed under the regulations – to allow his team mate space for the restart. Sainz refused due to fears he would be left under pressure from Lewis Hamilton behind and kept close to the rear of Leclerc, eventually passing him for the lead down the Wellington Straight.

Asked if he was upset by Sainz refusing to build a gap to his team mate, Binotto said he understood Sainz’s concerns and had no problem with his driver’s actions.

“Not only is it okay, I’m very happy with the way that Carlos behaved today,” Binotto explained.

“Because, for example, when we asked him to swap positions as before, he did it immediately with no discussion. And when we told him to give a rest to Charles after the Safety Car restart, what he said is not that he didn’t want to do it – he didn’t want to do it – he said ‘the guys behind me would be very aggressive, so I need to protect and somehow try to react, so leave it to me’.

“So I think he understood properly what was the intention. I think not only he understood, but he’s very good in the way that he’s acting and I’m very happy with this.”

70 comments on “Double stacking fears behind call not to pit Leclerc, says Binotto”