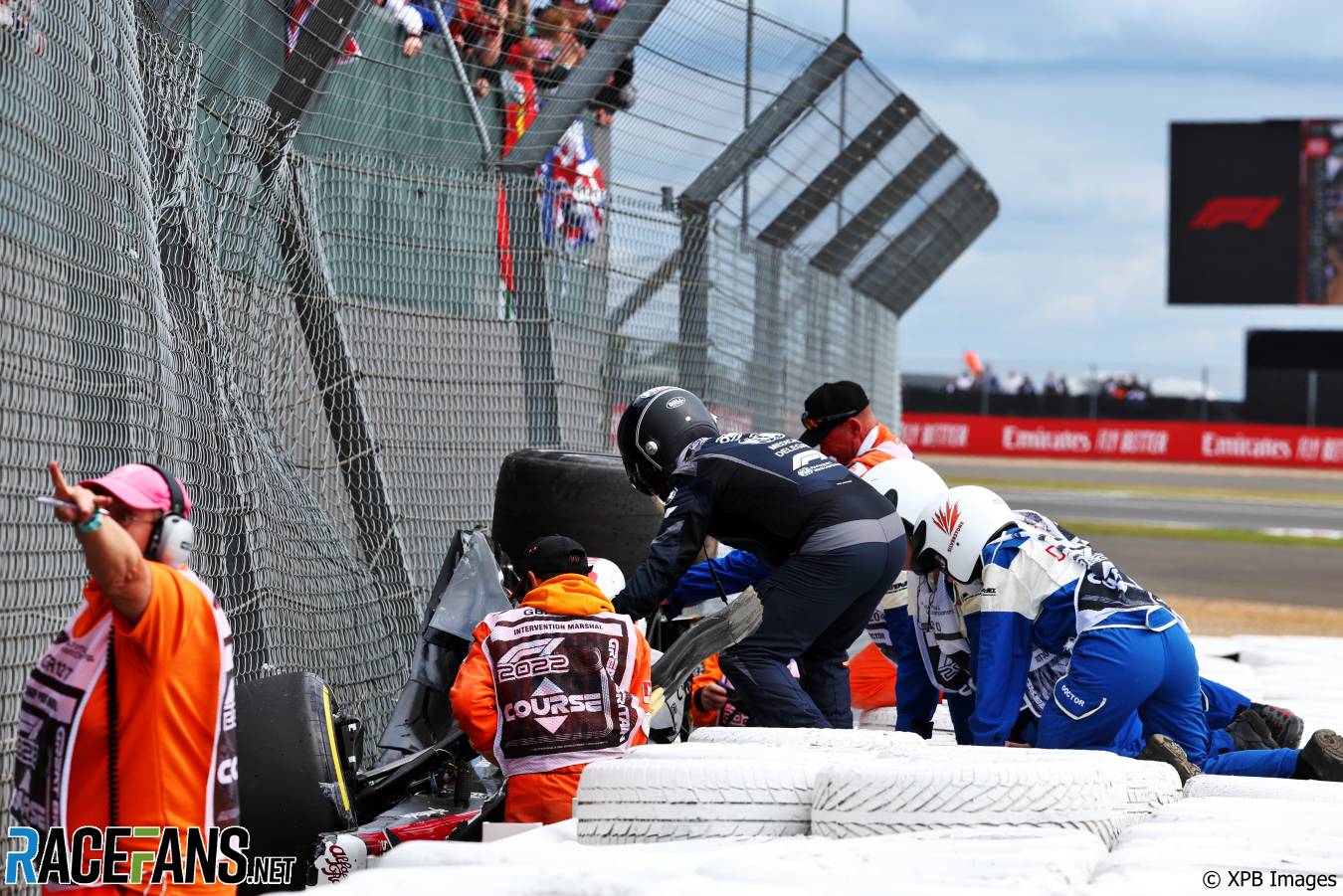 A fan whose video of Zhou Guanyu’s shocking British Grand Prix crash went viral described the moment his Alfa Romeo hit the fence in front of her.

Tanya, from Portsmouth, whose video of Zhou’s crash has been watched over six million times on Twitter alone, told RaceFans she was too afraid for the Alfa Romeo driver’s condition to fear for her own safety.

“Since it was the start of the race and the lights had just come down, most had their phones out filming. It was so exciting,” she said.

The crash began when George Russell and Pierre Gasly made contact. The Mercedes was sent spinning into the side of Zhou’s Alfa Romeo, which flipped it onto its roll hoop.

“When I saw the collision, the smoke and Zhou’s car hurling towards the gravel and barriers I was too shocked to put my phone down or try to run away as one [person] did in the video,” she said.

Zhou’s car slid directly towards the grandstand Tanya was watching from. As it neared the tyre barrier, the Alfa Romeo was launched up and over it, striking the debris fence in front of her, then dropping down in front of it.

“Everyone had a different reaction with some even trying to get closer to the fence as the car crashed into it,” she recalled. “In that moment I was too frozen and worried for Zhou to be scared for my own safety.”

While the Formula 1 broadcast avoided showing images of the crash scene, marshals quickly approached the car and began the difficult process of moving it so Zhou could escape from the cockpit.

“People closer to the fence were shouting to ask Zhou if he was okay, which he wasn’t able to respond to,” said Tanya.

“After the crash there were so many mixed reactions, many were in shock, or filming or couldn’t bear to look at the scene.” Some marshals called to spectators asking them not to film the recovery.

“George ran to Zhou’s cars and motioned over the marshals, medical and extraction team and was trying to help as best as he could before being taken back to the pits,” Tanya continued. “They reacted so quickly.

“Honestly it was amazing to watch just how much goes into safety in F1 and how much it’s improved. There was debris everywhere and so many things happening as multiple cars had crashed.

“Zhou was wedged and had no way of getting out the car himself and it took a long time to get him out of the car safely. They had to pull him out lying down.”

“Everyone there was so relived and happy to see he was out safely. It was amazing to see,” she added. Zhou was taken to the medical centre for checks and was released after he was found to be in good condition.

The experience was an especially surprising one for Tanya, who only discovered the sport last year and was attending a grand prix for the first time.

“This was my first F1 race and it was the most surreal experience,” she said. “I’d only ever watched races on TV and it’s completely different being able to experience it so closely.

“Many have described this as one of the worst crashes in F1 in many years and it reminded people just how dangerous this sport is with drivers risking their life every time they get into the car. F1 has come so far in terms of safety. The halo saved his life.”

I hope Zhou is okay after that crash it was worse than it looked #BritishGP pic.twitter.com/RI0Z1WQ7AU

6 comments on “‘Fans shouted to ask Zhou if he was okay’: How one spectator saw huge British GP crash”