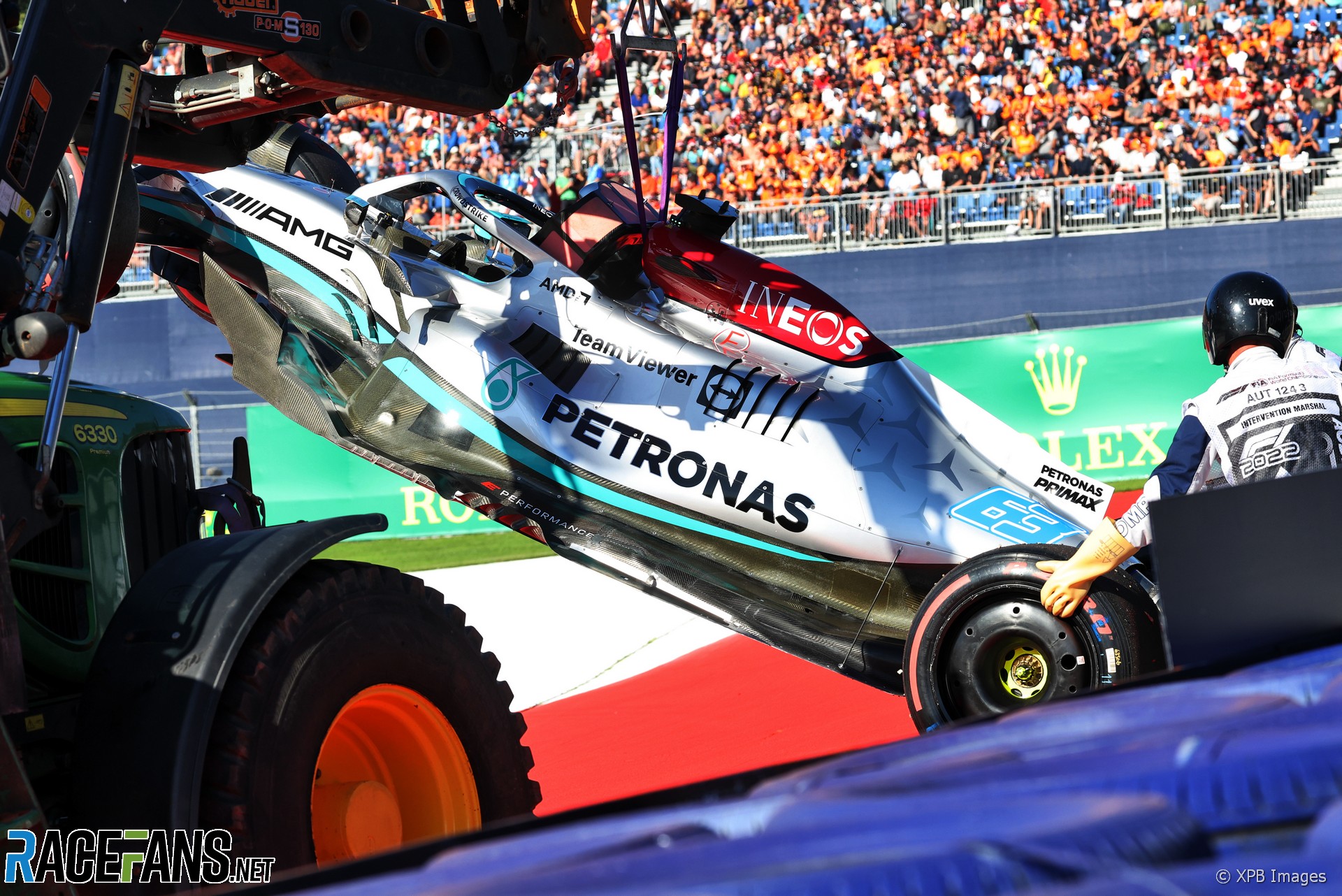 George Russell says Mercedes endured their “best qualifying of the year in terms pace” but “worst in terms of outcome” after both he and Lewis Hamilton crashed separately in qualifying for the Austrian Grand Prix.

Hamilton lost the rear of his Mercedes entering turn seven on his second flying lap attempt in Q3 for the Austrian Grand Prix, crashing into the barriers and bringing out the red flag. After the session resumed, Russell himself spun entering the final corner, also ending up in the tyre wall.

Despite his crash, Russell did not lose his fifth position by the chequered flag as his rivals behind him failed to improve oh his time. Russell will, therefore, start fifth for tomorrow’s sprint race – barring any penalties – but he disagreed with the suggestion the result amounted to a “lucky escape”.

“I wouldn’t say lucky escape,” said Russell. “We need to review the crash damage. There’s nothing lucky or fortunate about making a mistake like that.

“Two things: I could have been P4, for sure, I was a tenth up on my lap and absolutely went for it because I thought there was an opportunity for third. As it turns out, probably not. But we just need to see how much damage is done. I’m sorry to the team and to the guys in the garage.”

The crashes marked a frustrating end to a promising qualifying session for Mercedes, who appeared to have the pace to potentially battle with Red Bull and Ferrari for the front rows of the grid. Russell says Mercedes have the potential to take the fight to their rivals over the rest of the weekend.

“I think we ordinarily have better race pace than we do quali pace,” Russell said. “We’re definitely there in the fight.

“As a team, probably our best qualifying of the year in terms of pace, but probably the worst in terms of outcome. That’s racing. I’m personally going through a tricky couple of races, at the moment, but we’ve got tomorrow to make up for it.”

Russell believes that Mercedes can take heart from the pace they have shown relative to Red Bull and Ferrari in recent race weekends.

“We know that we’ve brought some things to the car. We know that Ferrari and Red Bull were probably pushing the boundaries with the planks a bit more than the interpretation of the regulation and probably all these things coming together is coming in our favour.

“Not getting carried away, Lewis was doing a phenomenal job, he was absolutely flying today. I probably went in the wrong direction with my set up for qualifying but may be in a good place for the race. I feel okay, physically, I’m just a bit concerned about the car, if we can recover it.”