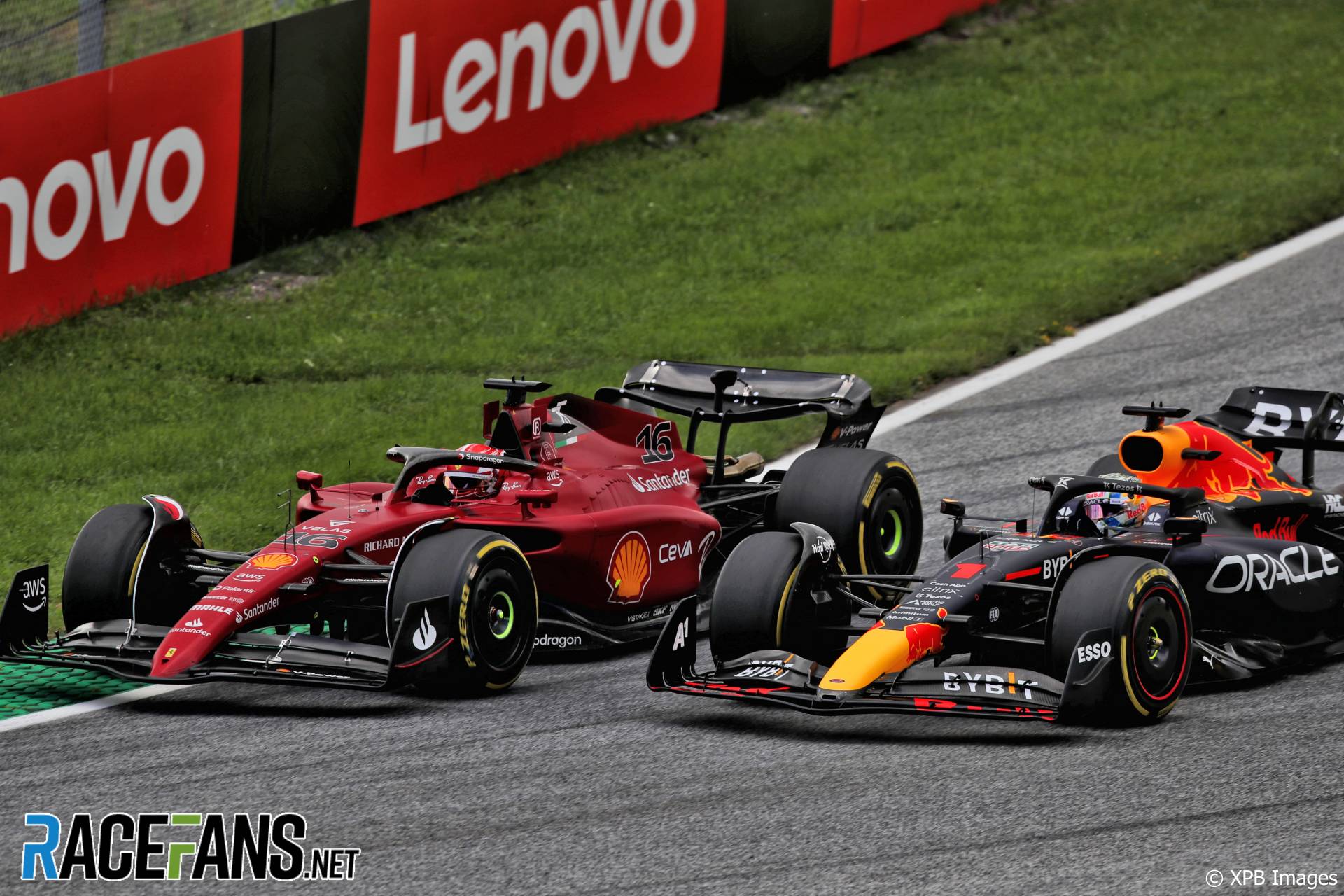 Charles Leclerc passed Max Verstappen for the lead three times and managed a stuck throttle in the closing laps to win the Austrian Grand Prix.

The Ferrari driver chased down Verstappen throughout the course of the race to eventually claim his first victory since the Australian Grand Prix in April.

Lewis Hamilton took the final podium position in third after Carlos Sainz Jnr retired with an apparent power unit failure late in the race which caused a spectacular fire on his Ferrari.

After both the Formula 3 and Formula 2 races had been held on a wet or damp track, the Red Bull Ring was fully dry as the field formed up on the grid for the start of the race. When the lights went out, Verstappen kept the lead at the start, with Leclerc in third and George Russell moving into third ahead of Sainz.

Sainz fought back to retake third from Russell, who then came under pressure from Sergio Perez. As Perez tried to pass the Mercedes around the outside of turn four, the pair touched at the apex of the corner, sending Perez spinning into the gravel and falling to the back of the field. Perez recovered from the gravel and continued, before pitting at the end of the lap. Russell would later be handed a five second time penalty for the clash.

After dropping back from the three leaders ahead, Russell pitted to serve his penalty and replace his front wing. He rejoined 19th, ahead of Perez, on the hard compound tyres. Having lost the lead, Verstappen pitted at the end of lap 13 and switched to hard tyres, rejoining in seventh place.

Hamilton passed Mick Schumacher at turn eight, then Kevin Magnussen soon after to move into fourth place. Next Hamilton was passed by Verstappen, who moved up into third, 20 seconds behind Leclerc and closing the gap on his fresher tyres.

By lap 26, Verstappen had reduced Ferrari’s lead to just 14 seconds, before Leclerc pitted for hard tyres at the end of the lap, rejoining in third place, just over six seconds behind Verstappen. Sainz inherited the lead, but only for one lap. He pitted to switch onto the hard tyres, rejoining back in third.

Leclerc immediately began chasing down the leading Red Bull on his fresh tyres. By lap 33, Leclerc was in DRS range of Verstappen and pulled to the inside at the uphill braking zone of turn three to sweep by and back into the lead. Verstappen then pitted for a second time at the end of lap 36 – the halfway point of the race – for another set of hard tyres. He rejoined in third, more than 20 second behind Leclerc.

On lap 40, Sebastian Vettel attempted to pass Pierre Gasly around the outside of turn four for 12th, but Gasly appeared to understeer into the right rear of the Aston Martin, sending Vettel spinning into the gravel. Vettel recovered back onto the circuit having lost considerable time and the stewards handed Gasly a five-second time penalty for being responsible for the contact.

Leclerc pitted for a second time at the end of lap 49 for a second set of hards, rejoining only a matter of seconds behind Verstappen. Within three laps, he was once again back up to the rear of the Red Bull. Using DRS up the hill, Leclerc took to the outside of turn three and then cut back to the inside to out-drag Verstappen and take the lead of the race for a third time.

With Leclerc through, Verstappen began falling into the clutches of Sainz behind. As Sainz pursued the Red Bull on lap 57, he suddenly began slowing down the straight with smoke coming from the rear of his Ferrari. Sainz pulled off track at turn four with his car now heavily on fire, but thankfully managed to climb out of the car before the flames began engulfing the cockpit.

The Virtual Safety Car was deployed as Sainz’s car was extinguished. Ferrari pitted the leader for mediums under the VSC, with Red Bull doing the same for Verstappen. Both driver retained their positions comfortably ahead of Hamilton, who was now a distant third.

When the race resumed, Leclerc held a lead of just under four seconds from Verstappen chasing behind. Soon after getting back up to racing speed, Leclerc reported throttle problems, with Ferrari informing their driver that his throttle was sticking to 20% whenever he lifted fully off the pedal. Verstappen began chapping away at the gap, but not by enough to put the leader under significant pressure.

After spending the final laps of the race battling with his throttle problems, Leclerc held on to complete the 71st lap and secure his first victory since April’s Australian Grand Prix. Verstappen crossed the line in second, just 1.5 seconds behind the winner at the end.

Over 40 seconds behind Leclerc, Hamilton eventually crossed the line to take the final podium position, with Russell recovering from his penalty to finish fourth. Esteban Ocon claimed fifth for Alpine, ahead of Mick Schumacher in sixth.

Lando Norris finished seventh for McLaren, despite serving a five second time penalty for exceeding track limits, ahead of Kevin Magnussen eighth and Daniel Ricciardo ninth. Fernando Alonso claimed the final point from the back of the grid, but is under investigation for an unsafe release from the pit lane.

Vettel, Gasly and Zhou Guanyu all received five second time penalties for exceeding track limits repeatedly, but all three finished outside of the points.