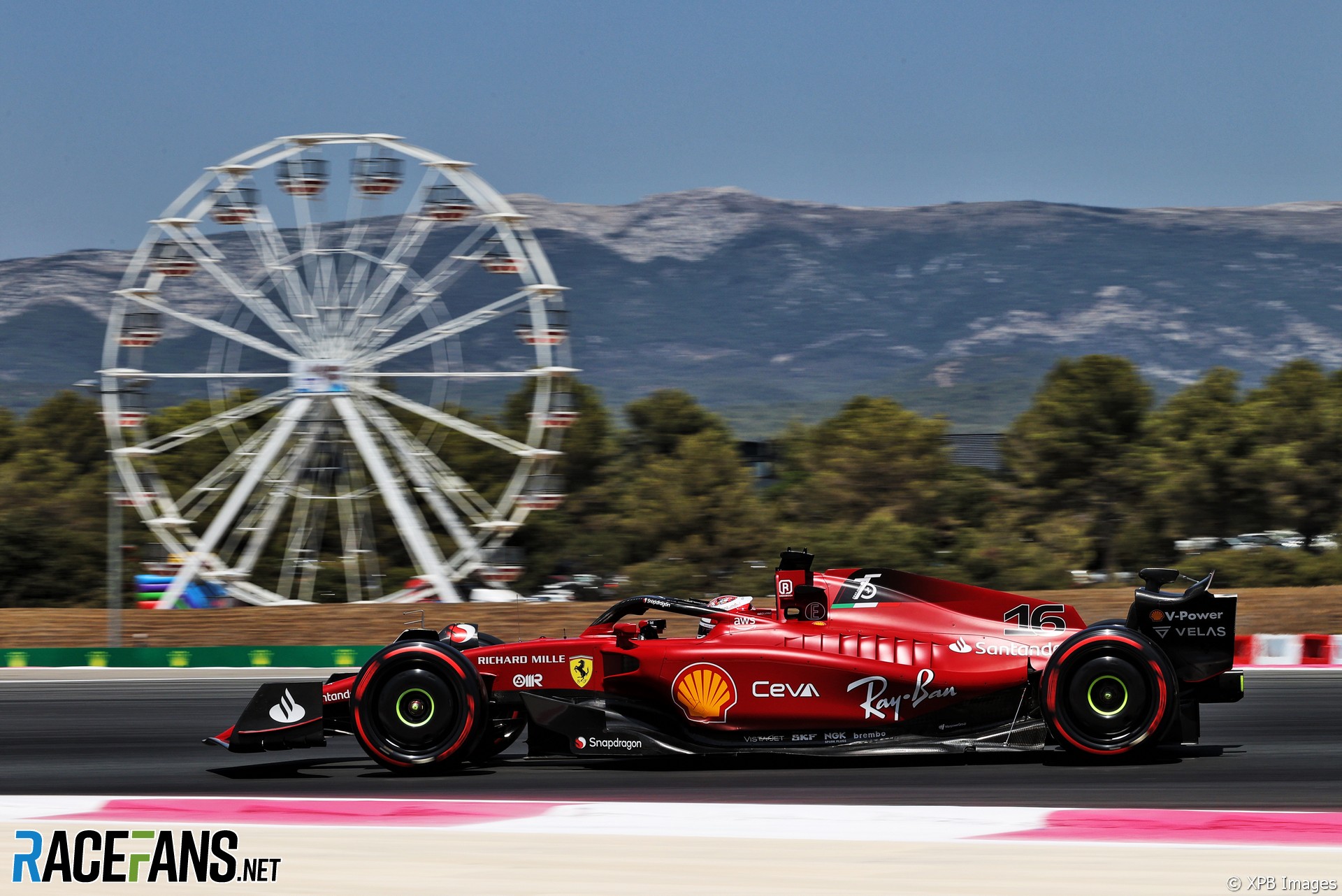 Charles Leclerc set the early pace around a hot Paul Ricard circuit in the opening practice session for the French Grand Prix weekend.

The Ferrari driver’s best time of a 1’33.930 was just under a tenth faster than championship leader Max Verstappen, with Carlos Sainz Jnr third fastest.

George Russell was fourth in the Mercedes. Nyck de Vries, who took over Lewis Hamilton’s car for today’s opening session, was ninth quickest.

The skies over Le Castellet were as blue as the abrasive runoff strips on the perimeter of the Paul Ricard circuit as drivers headed out for the first time in the weekend. Air temperatures were only just under 30C, while the track was a toasty 56C.

De Vries was among the first drivers out onto the circuit as many teams opted for soft tyres for their first runs. Lando Norris reported having a “spongy” feeling in his McLaren’s throttle, but told his team he was happy to continue as long as they were satisfied with his data. His team mate Daniel Ricciardo ran off at the exit of turn 12 before rejoining, his tyres somewhat worse for wear.

Red Bull set the early pace in the session, with Verstappen’s 1’34.991 fastest of all, half a second quicker than team mate Sergio Perez. While looking to improve on his best personal time, Perez lost control of his car at the apex of turn three, looping his car around and over the blue run off strips outside of turn four. Fortunately for Perez, he managed to continue back into the pits.

Hamilton wasn’t the only driver sitting out this session. Robert Kubica took over Valtteri Bottas’s Alfa Romeo and discovered a throttle problem where his Ferrari power unit did not appear to be delivering maximum power when depressing the pedal.

Carlos Sainz Jnr then put Ferrari on top of the times by setting the best lap of the session with a 1’34.268 on the soft compound tyres. However, Verstappen took back the top spot by improving to a 1’34.021, again on the soft tyres.

Austrian Grand Prix winner Leclerc was the next driver to lower the benchmark, posting a 1’33.930 with just under 15 minutes remaining to go just under a tenth of a second quicker than the championship leader. However, none of the top drivers improved on their best laps in the time that remained, leaving on top at the conclusion of the session.

Verstappen ended the session second quickest, with Sainz just under a quarter of a second behind the Red Bull. Russell was fourth, but almost a second slower than Leclerc’s best time. Pierre Gasly was fifth, despite bottoming out his car by running over the exit kerb on the exit of turn 11 in the final minutes of the session.

Perez was sixth in the second Red Bull, ahead of Norris, who is under investigation by the stewards for failing to follow the race director’s instructions during the session. Alexander Albon was eighth, with De Vries finishing his one-off practice appearance in eights, around six tenths slower than Russell’s best time. Ricciardo completed the top ten positions for McLaren.