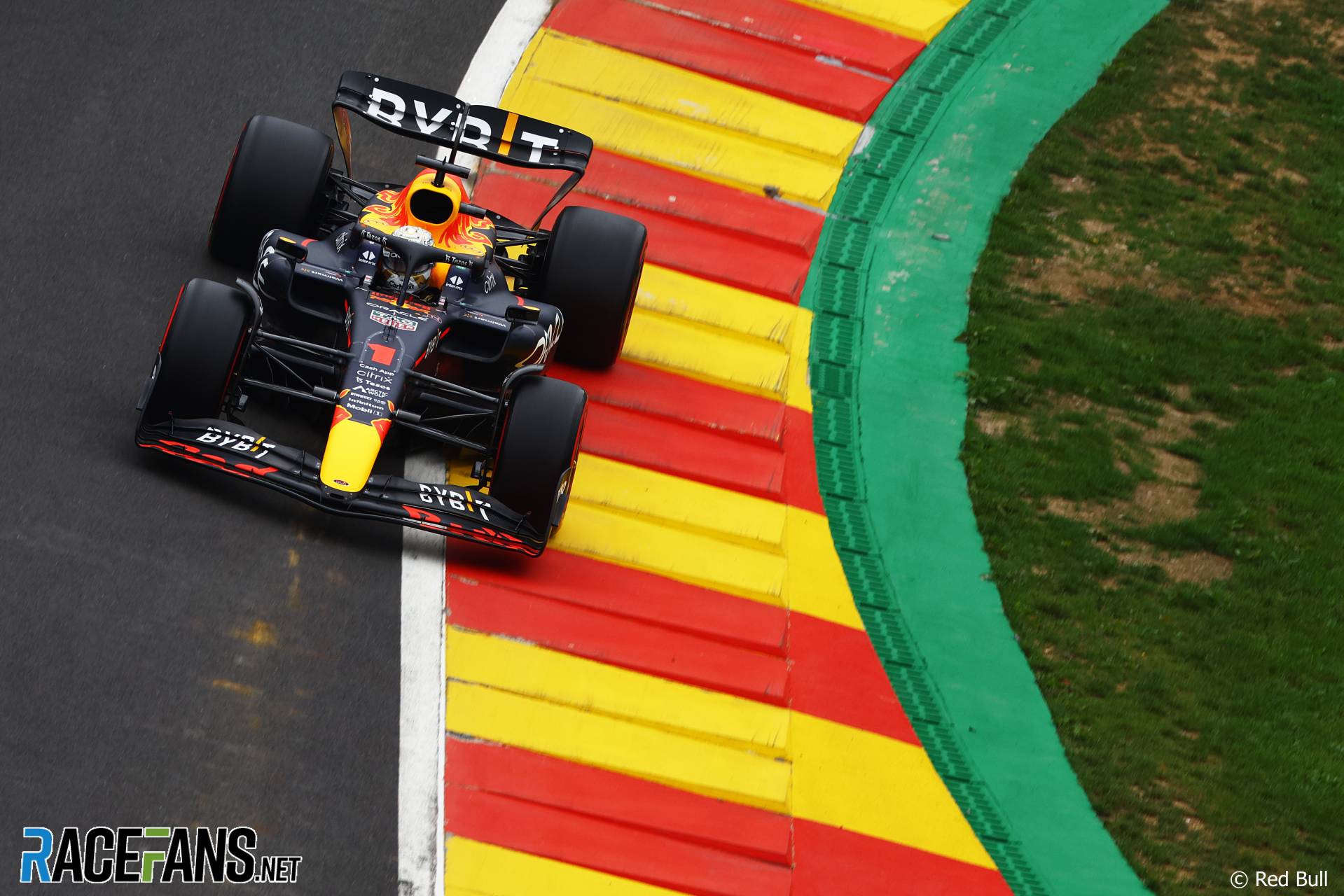 Next tracks “might be a little bit more difficult” – Verstappen

Verstappen expects a harder job to win in the next races on the Formula 1 schedule, despite his most recent success coming from 14th on the grid.

The Red Bull driver dominated qualifying and the race at last weekend’s Belgian Grand Prix, but Red Bull fitted a fourth internal combustion engine, turbocharger, MGU-H and MGU-K to his car during the event, exceeding the tally of three of each permitted for use in a season, and so he started 14th following the application of grid penalties.

That he already led by lap 12 at Spa-Francorchamps showed the level of dominance Red Bull were capable of. But Verstappen anticipates a greater challenge than he had in Belgium to win in the races ahead.

“I think our car is very efficient. This track [Spa] I think suits it perfectly, maybe,” he said. “So I know that some tracks which are coming up might be a little bit more difficult; then I expect again a good battle with Ferrari. It was just that this track seemed to be perfect for the car.”

McLaren fastest in straight line yet struggle in DRS – Norris

Lando Norris has posed another conundrum about McLaren’s pace in the Belgian GP, saying his car was one of the fastest in a straight line yet was being bettered by rivals at the highest speeds on straights.

“I think we were probably one of the quicker ones on the straights. Where we lose a lot is in DRS,” he explained.

“For some reason, in DRS we’re pretty shocking. Some cars are a lot better than others. In a pure straight line condition I think we were quicker than Red Bull.

“But then the Red Bull opens DRS and gains somehow like another 15kph and is in a complete different league to a lot of people. So there’s something where we’re maybe missing with DRS, maybe that makes our overtaking opportunities less than other people. But in a straight line, we were probably one of the quickest this weekend.”

Three drivers on this year’s F1 grid are yet to race on the updated version of Zandvoort and Haas’s Kevin Magnussen will be the least familiar with the track going into first practice on Friday.

Zhou Guanyu and Alex Albon last visited the circuit in the old FIA European Formula 3 championship in 2018 and 2015 respectively, while Magnussen has not raced on the circuit since coming third in the 2011 Masters of F3 event.

“It’s a great track,” he recalled. “It was a great track in F3. I know they’ve changed it a little bit, but I think they only made it better, at least looking from the outside last time out. Looking forward to it.”

Hear more about our legendary founder, Bruce McLaren, on what would have been his birthday.

Always racing with us. 🧡

Interesting. Wonder if that’s the one that was (allegedly) obtained by a previous owner somewhat (allegedly) by subterfuge. Stressing allegedly a lot.

'A difficult race in the Ardennes for Scuderia Ferrari. Iñaki Rueda talks us through a multifaceted grand prix, where lack of pace and unforeseen circumstances played a crucial role.'

'One key question has remained unanswered; why did Alpine enter negotiations with Alonso and not simply promote Piastri?'

Formula E: Documents give inside look at how Vancouver car race veered off track (Vancouver Sun)

'Organisers of the cancelled car race 'continually failed or neglected to comply' with standard requirements 'in a timely manner and in some cases at all,' according to internal City of Vancouver documents.'

Mind coach sure Piastri will be F1 superstar (Auto Action)

'Emma Murray, the mind coach who helped Scott McLaughlin become such a success in Supercars and IndyCar, has no doubt Oscar Piastri is going to be a superstar in F1.'

'A shift in testing strategy will have the IndyCar series using more formalised group outings for its entrants in place of some of the private test dates where teams are free to run on their own.'

Another race has gone by and another round of criticism for Ferrari’s race strategies. Team principal Mattia Binotto defended Ferrari’s approach post-race and it left some observers perplexed, including RaceFans readers.

I can understand Binotto wanting to put a brave face on things and keep morale up, alleviate some pressure on those making the calls.

But even if we give Ferrari the benefit of the doubt on a handful of decisions and say they did their best with the info they had at the time that still leaves plenty that were just either strange or plain wrong. I think it’s good to acknowledge the bad ones, they happen.

Teams that win world championships rarely get their strategies questioned (and certainly not at what seems almost every round). And when they do drop the ball – they tend to be the first to say ‘Yeah, we got that one wrong’.
bernasaurus