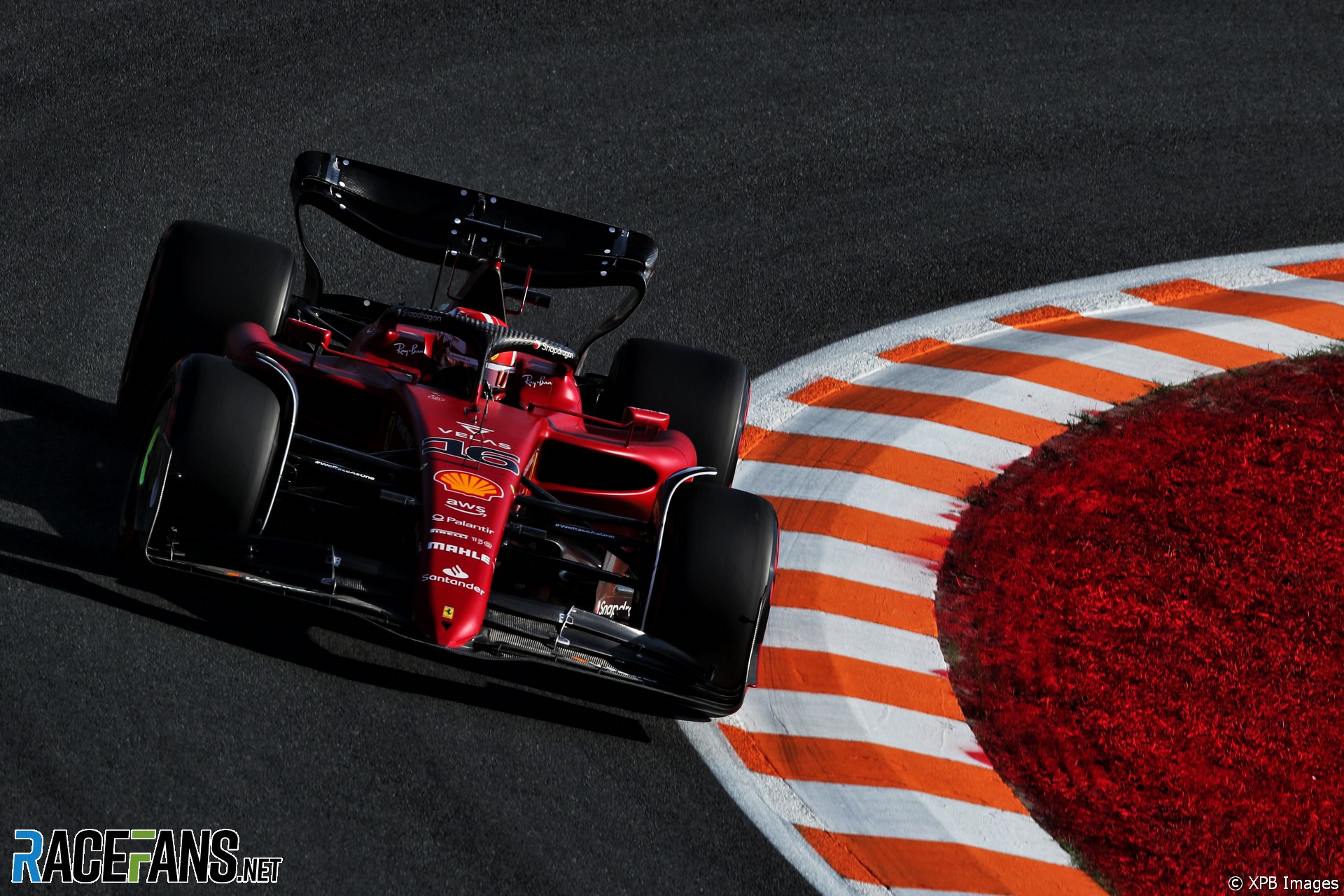 Charles Leclerc set the pace in the final practice session for the Dutch Grand Prix at Zandvoort, but was less than a tenth of a second quicker than George Russell.

After lacking pace compared to his rivals on Friday, Max Verstappen was much closer to his rivals in third practice, ending the session with two tenths of a second of Leclerc.

The seaside sun beamed down over the Zandvoort circuit as the final hour of practice got underway with air temperatures a comfortable 23C under the clear blue skies. There was no initial rush to head out onto the circuit, although Sergio Perez did take to the clear track to on soft tyres to set the first representative lap time of a 1’13.792.

After Perez returned to the garage, more drivers began to venture out of the pit lane. Verstappen, Leclerc and Lewis Hamilton all took to the track on soft tyres, with Verstappen immediately going quicker than his team mate by 1.2 seconds on his first timed lap to set the fastest time of the weekend of a 1’12’309. After a couple of cool-down laps, Verstappen improved on his best lap by just over a tenth.

Leclerc used the soft tyres to moved into second in the times, around half a second off Verstappen’s fastest time. Hamilton moved into third just a tenth behind the Ferrari, but only after a close call passing Yuki Tsunoda’s AlphaTauri on the entrance of the fast right hander of turn seven.

With around 20 minutes remaining in the session, times began to drop across the field. This was best demonstrated by Alexander Albon, who jumped into third place in the Williams, setting a fastest final sector to go around half a second slower than Verstappen’s best time.

Carlos Sainz Jnr took his Ferrari out on a fresh set of soft tyres to become the first driver to break the 1’12 barrier, setting a new fastest time, a quarter of a second quicker than Verstappen’s previous best. After an extended period in the garage, Leclerc was released onto the track with fresh soft tyres of his own and beat his team mate’s best time by three tenths with a 1’11.632.

Mercedes also found more speed, with Russell jumping up to second in the times less than a tenth of a second slower than Leclerc’s best. Hamilton found traffic in the final sector on his flying lap, but moved up to fourth, half a second behind the fastest Ferrari.

Verstappen’s next flying lap saw him improve on his own personal fastest time, but a moment of oversteer exiting the banked turn three cost him time as he moved third, two tenths from Leclerc’s best. After a couple of cool-down laps, Verstappen improved by a tenth, but remained in third.

There were no major improvements at the front of the field in the final five minutes of the session, leaving Leclerc quickest at the chequered flag with Russell in second less than a tenth behind. Verstappen was 0.161s off Leclerc in third – a major improvement for the championship leader compared to Friday’s second session – with Sainz fourth fastest just over three tenths slower than his team mate.