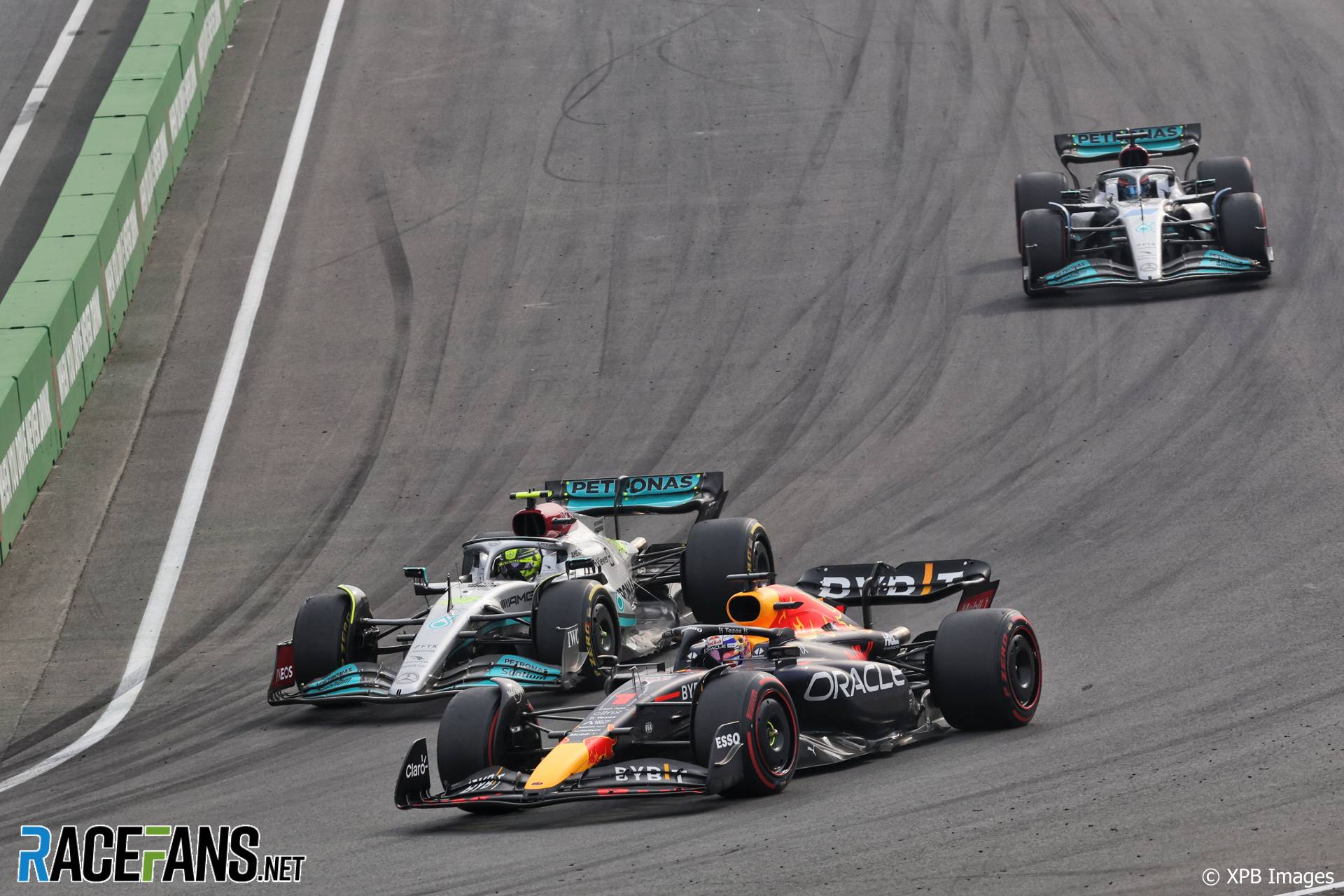 Max Verstappen overtook Lewis Hamilton during a late Safety Car restart to retake the lead and win his home grand prix at Zandvoort.

The championship leader led the majority of the race but pitted under a late Safety Car, handing the lead to Hamilton until his passed him at the restart. George Russell finished second, with Charles Leclerc taking third for Ferrari.

When the lights went out, Verstappen successfully retained the lead from Leclerc, while Carlos Sainz Jnr held onto third after a close encounter with Lewis Hamilton on the exit of the first turn. Behind, Russell fell behind Lando Norris into seventh while Lance Stroll jumped from tenth to eighth.

On the second lap, Alexander Albon and Kevin Magnussen battled out of the first corner for 15th place, with the Haas driver running off track at turn two and brushing the barrier. Despite dropping to the rear of the field, Magnussen was able to continue.

Leclerc kept in touch of the leader in the opening laps, pulling within DRS range of the Red Bull on lap six. However, Verstappen responded and pulled the gap back to over 1.5 seconds. Sainz in third dropped back from his team mate and was under pressure from Hamilton on medium tyres, but managed to keep the Mercedes from getting a serious run on him.

Sainz pitted with Sergio Perez following not far behind. However, Ferrari failed to have Sainz’s left-rear tyre rear, costing Sainz vital seconds, while Perez emerged from his pit box and ran over the wheel gun, although Ferrari were able to fit Sainz with a new tyre and send him back out having dropped multiple places.

Leclerc pitted for mediums at the end of lap 17, rejoining in fourth, while Verstappen pitted two laps later, rejoining with a five second advantage ahead of Leclerc in third. Hamilton was now leading on his medium tyres, ahead of team mate Russell, with the two Mercedes the only cars yet to have made their first stop.

Verstappen caught up to the back of Russell and only required one trip through the DRS zone on the pit straight to pass the Mercedes around the outside into turn one and move up into second place. The Red Bull driver inherited his lead back at the end of lap 29 when Hamilton pitted for hard tyres, dropping him back in front of Sainz in fifth, before Russell followed suit two laps later, bringing Leclerc back up to second place.

Hamilton pushed immediately on his hard tyres, catching up to third-placed Perez. As they began lap 36, Hamilton tried to make a move around the outside of turn one but Perez held firm, closing the door on the exit. The next lap, Hamilton managed to get ahead of the Red Bull, but found himself heavily held up by the Aston Martin of Sebastian Vettel leaving the pit lane, who only yielded under blue flags at turn seven. Vettel was later investigated for ignoring blue flags and given a five-second time penalty.

Red Bull chose to pit Perez for hards on lap 41, dropping him to seventh, before Yuki Tsunoda suddenly pulled off the circuit. Ferrari pitted both drivers for hard tyres, dropping Leclerc to fourth behind the Mercedes. Tsunoda pulled back onto the circuit and but was soon told to stop on track a second time, prompting a Virtual Safety Car. Mercedes took advantage to pit both Hamilton and Russell for mediums, rejoining still ahead of Leclerc.

The race resumed when the VSC was lifted on lap 50, Hamilton left with a 12.5-second gap to Verstappen to overcome in the final 23 laps. However, Valtteri Bottas suddenly stopped on-track approaching turn one, which led to the Safety Car being deployed.

Red Bull pitted Verstappen for soft tyres, which meant he fell behind the two Mercedes into third. As the field lapped behind the Safety Car, the FIA directed cars to drive through the pit lane. As they did, Russell pitted for soft tyres, which dropped him behind Verstappen into third but put him on identical tyres to the Red Bull, while Hamilton remained on used mediums.

When the race resumed at the start of lap 61, Verstappen immediately slipstreamed past the Mercedes along the pit straight and retook the lead before turn one. A handful of laps later, Russell drafted his way by his team mate to take second place, with Hamilton dropping another position to Leclerc in similar fashion a few laps later.

Verstappen pulled gradually away from the pursuing Russell and ticked off the remaining laps to take the chequered flag and secure his fourth consecutive victory. Russell claimed second, five seconds behind, with Leclerc crossing the line to complete the podium in third.

Hamilton was deeply unhappy in fourth, with Perez finishing in fifth. Fernando Alonso took sixth ahead of Lando Norris in seventh, with Sainz provisionally classified eighth after a five second time penalty for an unsafe release was applied, but a further penalty likely for overtaking under yellow flags. Esteban Ocon and Lance Stroll took the final points in ninth and tenth, respectively.