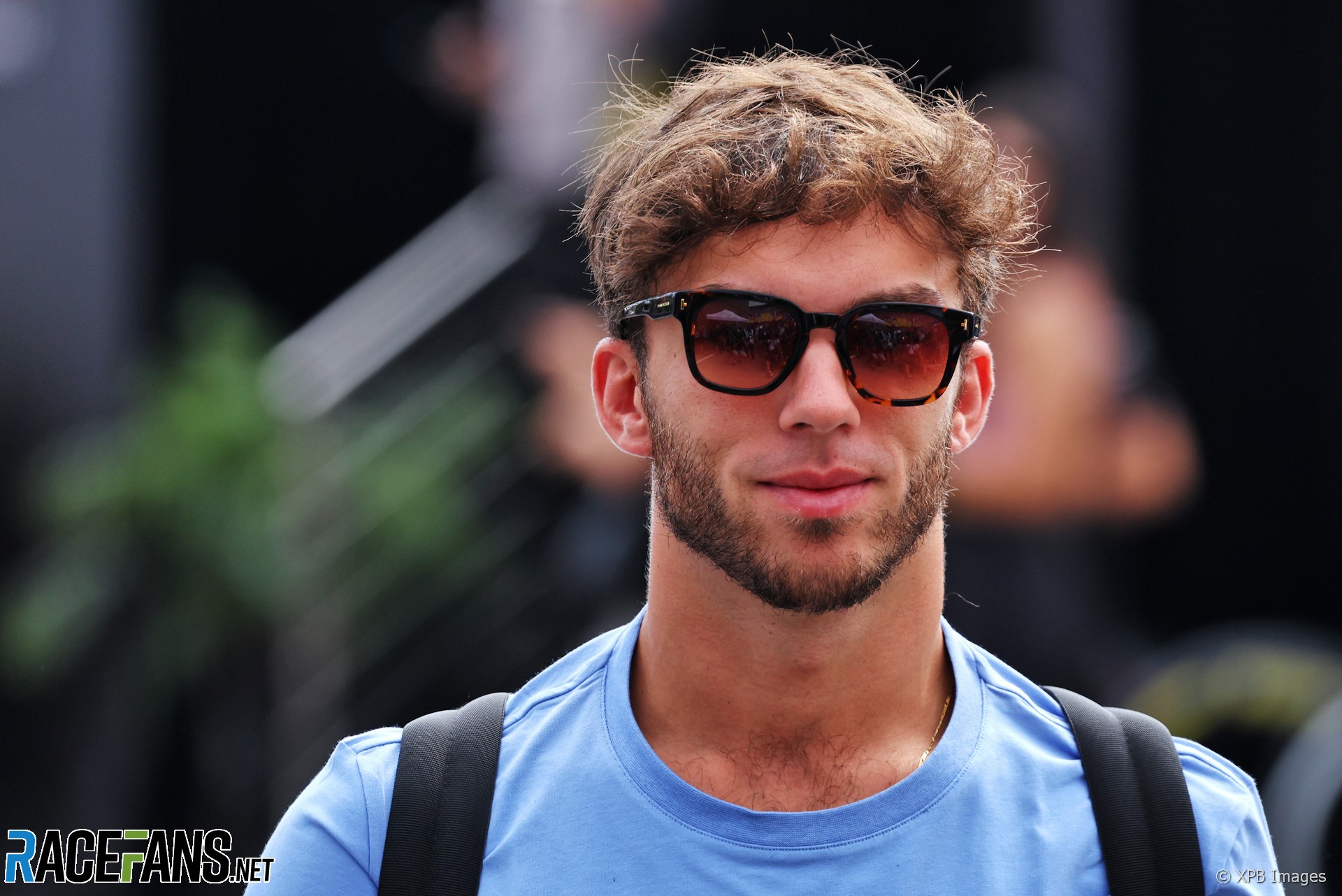 In the round-up: Pierre Gasly described his first laps in practice after being ill as feeling like a “slap in the face”

RaceFans’ coverage of this weekend’s Italian Grand Prix at Monza is presented in association with Grandstand Motor Sports.

Attend the 2022 Formula 1 season finale at Yas Marina in style with their comprehensive tour packages including return flights, four-star accommodation, transfers and a dedicated on-site representative. You can also add a three-day extension visiting nearby Dubai.

Find out more and book your tour here:

First laps after illness ‘like a slap in the face’, says Gasly

Pierre Gasly described his first laps in practice after being ill as feeling like a “slap in the face”.

The AlphaTauri driver was advised to miss Thursday’s media engagements on medical grounds but was cleared to participate in Friday’s practice sessions. He ended the day 14th ahead of team mate Yuki Tsunoda.

“I must say the first few laps were a bit of a slap in the face after being on the sofa and in bed for pretty much the last 72 hours,” Gasly said in response to a question from RaceFans.

“We knew it would be difficult, but this morning was the best I’ve felt over the last four days. I’m still not feeling 100%, but it was good enough to drive and tomorrow I should be again feeling better.”

De Vries “privileged” to drive three 2022 cars in one season

Nyck de Vries says he has relished the opportunity to drive three separate cars during three free practice runs during the 2022 season.

The 2019 Formula 2 champion and 2021 Formula E world champion has been given the opportunity to drive this year’s Williams, Mercedes and Aston Martin during Friday practice this season. De Vries is currently working to secure a race seat in Formula 1 for 2023.

“It might sound cliche, but it’s honestly very valuable to get the opportunity to look inside three different teams and organisations and see how they operate and how they approach different things, where they put their emphasis,” said De Vries after completing his Aston Martin run on Friday. “Also to feel the differences between the three cars.

“I think it’s just been a privilege to get that opportunity and to get that experience under my belt.”

Formula 2 championship leader Felipe Drugovich has been hit with a five place grid penalty for the Monza sprint race after setting a personal best micro sector under yellow flag conditions in qualifying.

The MP Motorsport driver secured fourth on the grid for the feature race by improving his time on his final lap while passing yellow flags at the final corner due to the crash of Ayumu Iwasa. The stewards determined he had set a personal best micro sector while driving through the yellow flag zone and handed him a five place grid penalty for Saturday’s sprint race

The decision means Drugovich, who would have started from seventh on the partially-reversed-grid, will now start from 12th. Championship contender Theo Pourchaire will start directly behind him in 14th.

"A guest arrived by helicopter at Sir Jackie Stewart’s Buckinghamshire estate. It was a few days before this year’s British Grand Prix and the Formula One grandee was too busy to greet his arrival. Sir Jackie’s staff fretted, and buzzed him in his study, requesting his presence pronto. ‘I can’t come now,’ was the response. ‘I am on the phone to the Queen.’"

"Binotto, as a home-grown Ferrari man rather than a hired gun from the outside employed very much on their own terms, does not have quite the same clout and implicit support that Todt enjoyed. But he’s making progress regardless. Had the Ferrari not been so fast that it could compete with Red Bull this year, we wouldn’t have seen the same pressure applied to the pitwall, any errors would have been less in the spotlight and there’d likely be no great call for the head of the boss."

"ITA Airways' new blue livery A-350 dedicated to the legendary Enzo Ferrari will make its first flight in Monza at the Italian Grand Prix on September 11, when it will be the forerunner to the 'Frecce Tricolori' at the start of the race, during the national hymn."

"With his upcoming expansion to field eight Indy Lights cars under the HMD Motorsports banner and a brand-new Indiana-based shop in the works, Henry Malukas says a move into the NTT IndyCar Series is the next step for the organization."

"As a team, we are made up of people from many places, and this is an event that will be felt across the world. Many of us including myself are not British, but I admired and respected her quiet leadership and her resilience.”

Heading out for FP2 at Monza with a special tribute to Her Majesty The Queen Elizabeth II. pic.twitter.com/2fLwTTWkcT

In your honour, Your Majesty. pic.twitter.com/VLfIp3c9WJ

You may have noticed we’re rocking a tweaked livery for this weekend 👀🇮🇹#ItalianGP pic.twitter.com/nV2sTsvRkR

Hi @Autodromo_Monza @F1 it's boiling and we're all cramped trying to get you're ridiculous token so that we can eat and hydrate THIS IS RIDICULOUS pic.twitter.com/tfUXUGFa4Y

Jacques Villeneuve giving the grandstand a big smile after his Lotus didn’t even make it to turn one. Don’t worry Jacques, we appreciate you champ! #F1 #ItalianGP #Monza pic.twitter.com/jm0ztIaY1m

Craziness ⁦@Autodromo_Monza⁩!! Going through 3 checkpoints/bag checks before reaching the grandstand without beer. Why do we need to have our tickets scanned to get out?? Going to be a “fun” Sunday at #monza. pic.twitter.com/kTV7A44ERu

The #ItalianGP marshals will be protected by our new fence panels this weekend.
Installed on our own concrete barriers, two exit gaps provide ample space for waving flags and holding Safety Car boards.#F1 #Marshals #OrangeArmy pic.twitter.com/xp3eHVtWls

Red Bull and Porsche have just swerved a repeat of the Williams BMW misfire IMHO. There can only be one senior partner & clear leadership structure in an F1 team. Otherwise it becomes a mess for both very quickly. There’s a clear alternative for Porsche to pursue. #F1

With Red Bull’s talks with Porsche over a potential 2026 power unit deal having collapsed, Jasper thinks that the Milton Keynes-based team will be just fine…

I totally understand why Red Bull doesn’t want change just for the sake of change. They’ve experienced being totally dependent on an engine manufacturer and then when that company decides to pull the plug they’re up the creek without a paddle.

I think their new model with the Powertrains being built at the same factory as the car is the right one. They can carry on regardless. If a car company wants to come in and be a part of it they can, that company can put some of their technical people into the mix and work with them but it’s on our terms. They can put their badge on the car as well. With Newey’s new RB17 Hypercar that was evidently just a placeholder name with a view to being rebranded as the Porsche Red Bull 999 Hypercar.

If they’re not going to team up with Porsche, Honda would make sense as they’ve already proven to work together well and successfully. Even now that Honda have officially pulled out it’s arguably the best performing engine in F1 at this moment with performance and reliability.
Jasper