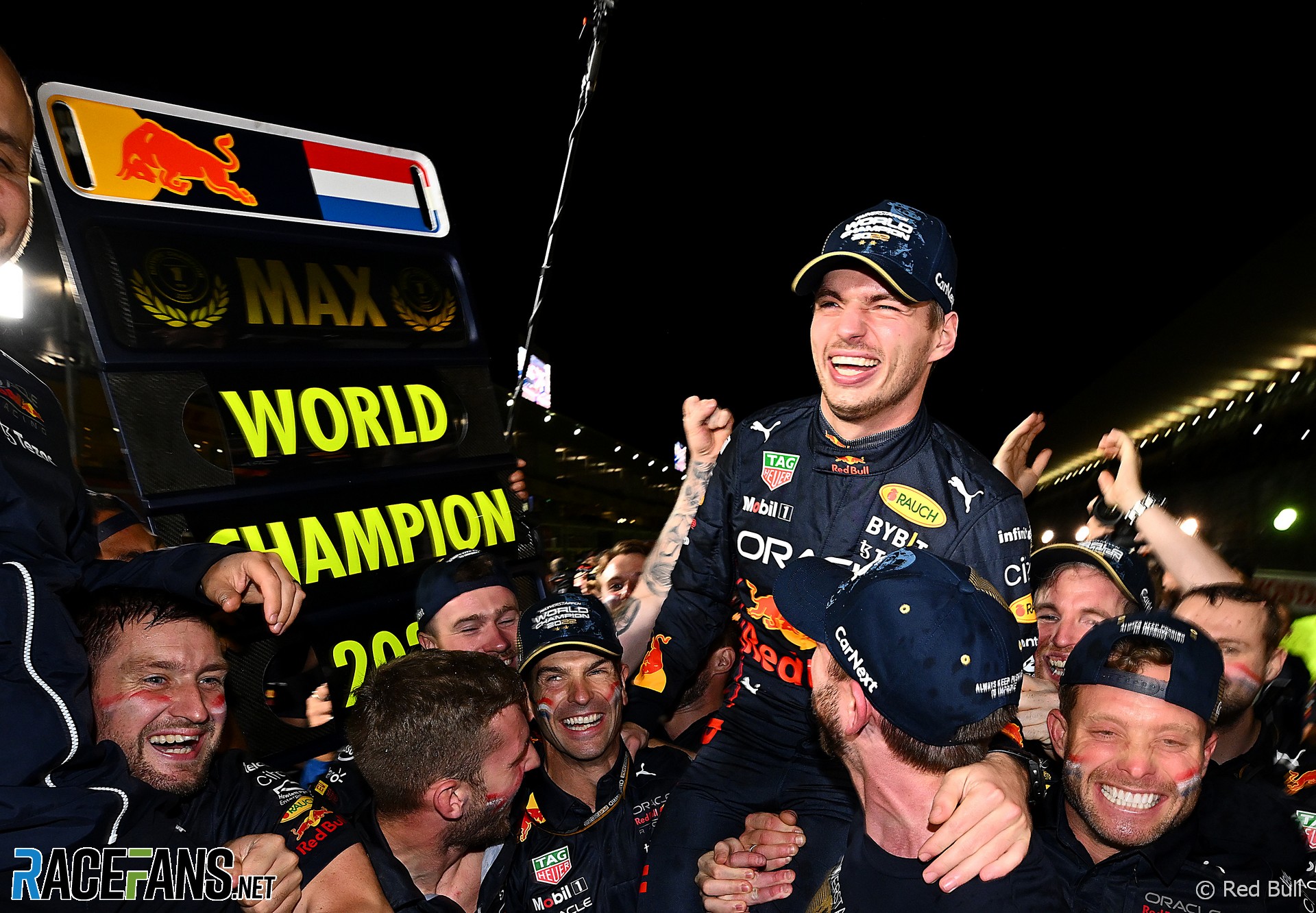 Plonking himself down on a red throne, which was draped with faux fur, sitting before a banner proclaiming “World Champion 2022”, Max Verstappen could clearly be heard asking at the end of the Japanese Grand Prix: “Have I, or have I not?” This was the question on everyone’s lips: Had he done enough to secure a second world championship with four races to spare?

It was one of the most awkward endings to a Formula 1 championship title battle in history. It left the Red Bull team bosses frantically studying the rule books to find out if their man had won.

After what felt like a lifetime of awkward glances between the occupants of the cooldown room, the FIA confirmed Verstappen was indeed the world champion. His shoulders lowered, his chest relaxed and a huge grin spread across his face. Charles Leclerc had been handed a five-place grid penalty, meaning Sergio Perez was elevated to second; moreover, the regulations unexpectedly awarded full points for the half-distance race, despite new rules having been introduced this year which were supposed to prevent that happening.

Verstappen therefore claimed his second world title, and with it secured his name in the history books again. But this season it felt different. After a bumpy start to the season, he has since dominated, been in a league of his own, showing greater maturity in and out of the car.

After the opening three races Verstappen was 46 points behind the Ferrari of Leclerc. The Red Bull driver effectively ran out of fuel at the opening race of the season in Bahrain, beat Leclerc to win in Saudi Arabia, but a fuel leak in Australia left Verstappen point-less again. Leclerc’s two wins and a second left him on 71 points. All signs pointed to a Ferrari resurgence, with Verstappen facing a new threat to defend his title.

Since then, Verstappen has won 11 out of 15 races, making few mistakes to on his way to a commanding second title triumph. The season as a whole was a stark contrast to the emotionally charged 2021 campaign. The clashes with Lewis Hamilton at Silverstone and Monza. The gut-punch of his tyre exploding while he was six laps away from winning the Azerbaijan Grand Prix. And of course that notorious conclusion in Abu Dhabi.

The 2022 title-decider was also controversial, though for other reasons. And it confirmed Verstappen’s annihilation of the opposition this year, the title settled with four races to go.

Now a double world champion, Verstappen said his latest triumph left him with “very different emotions” compared to his 2021.

“Last year, [fighting] all the way until the last race is probably the worst kind of feeling. Because at the time I don’t think we were the quickest anymore, so that also doesn’t help. This year I think has just been very, very different in emotions from the start all the way through the year.

“But both [titles] are beautiful and both are, at the end of the day, nice to experience. It’s nice also to really have always the pressure on and having to perform to your limit every single lap of the race. But not for too many years in a row. So I was very happy with the year we had this time around.”

The 2021 season was the last for F1’s previous generation of cars. This year ushered in a new generation of machines designed to race together more closely.

“Then of course [there’s] the amount of races we’ve won, but also they all came in quite a different way.”

Of his dozen wins, Verstappen has won from pole just four times this year, a clear contrast to last season. “Last year was all really qualifying dependent and that’s how you normally would then win a race,” he says.

Verstappen has won from as low as 14th on the grid this year, such as at Spa-Francorchamps where he exceeded his maximum allocation of power unit components.

“Now, even with some engine penalties coming back to the front, it’s really been an enjoyable year and a very special year. [It] will be very hard, I think, in the future to match from myself I think as well.

“That’s why I think we really have to appreciate it and really enjoy it. We were enjoying it already, probably now we can just enjoy it a little bit more.”

When a driver has been in the sport since the age of just 17 – not something we’re going to see again in the future – the impression he made at the start of his career. After such a short apprenticeship he was constantly learning on the job and had a short fuse at times.

His brush-ins with the sport’s establishment led to flare-ups, notably after he crossed swords with Kimi Raikkonen at the Belgian Grand Prix in 2016. They made contact at La Source at the start of the race, after which Verstappen incensed Raikkonen by firmly blocking him on the Kemmel straight.

Raikkonen labelled Verstappen’s driving “fucking ridiculous”. Another world champion, Jacques Villeneuve, chimed in, suggesting if Verstappen didn’t calm down on track he was “going to kill someone.” Verstappen shrugged off the comments post-race, saying he was defending his position, and “if someone doesn’t like it that’s their problem.”

His run-ins with Hamilton last year led the Mercedes driver to describe Verstappen’s style as “dangerous” and “crazy”. But this kind of acrimony has been conspicuously absent in 2022.

The two very different championships Verstappen has won demonstrate his ability to adapt. He held on under pressure from Mercedes and a seven-times world champion last season. This year he adapted to a completely new car built to radically altered rules and regulations.

The controversies around this and last year’s championship deciders inevitable provoke a range of opinions. But they shouldn’t detract from the quality of job Verstappen has done as he has blossomed from a rough-edged young ‘future star’ into an impressive double world champion.