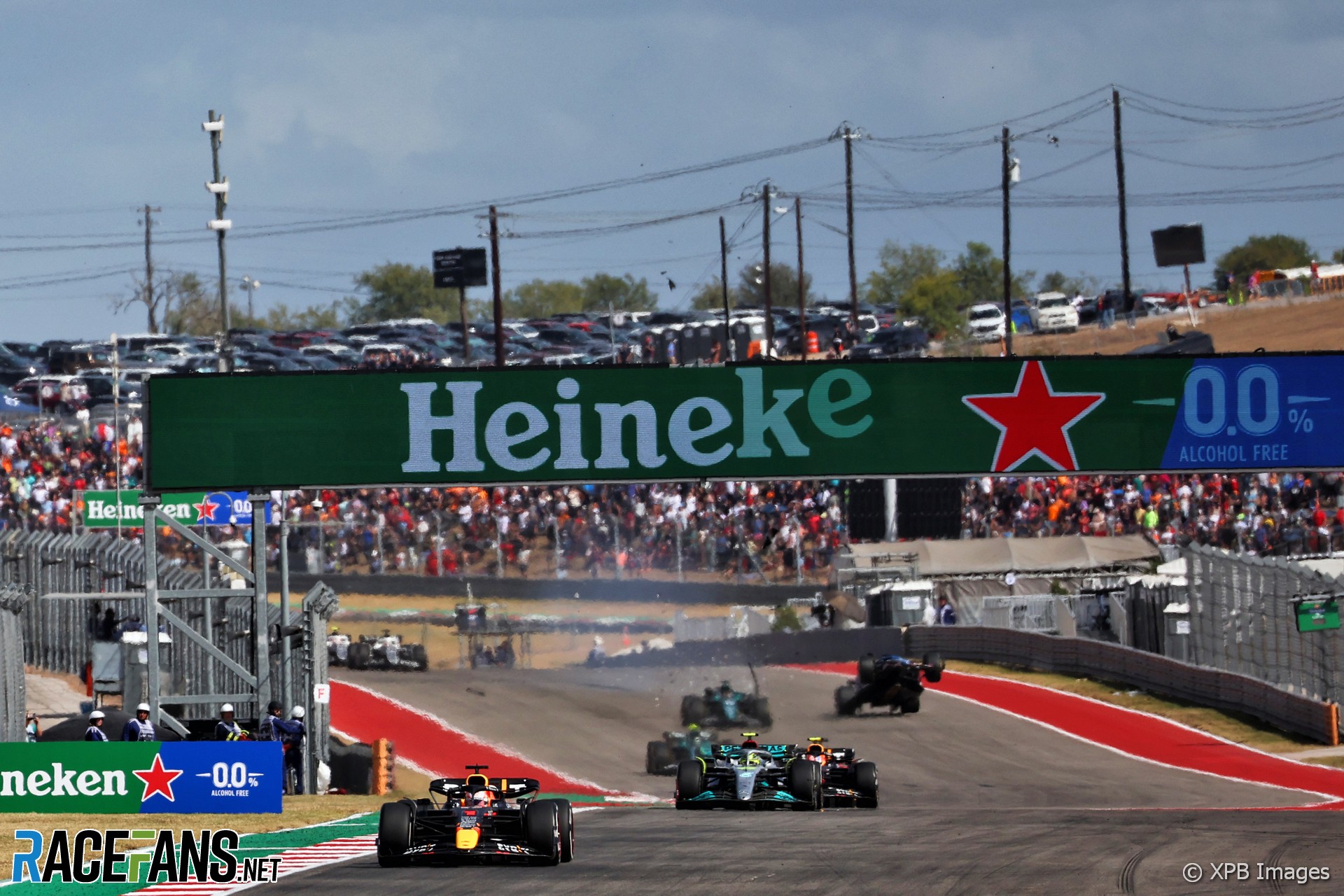 Fernando Alonso said he feared a huge crash after he was launched off the back of Lance Stroll’s car during the United States Grand Prix.

But the Alpine driver defended Stroll, his future team mate, after the stewards blamed him for the collision.

The pair made contact following a restart on lap 22 of the race. Alonso moved left to overtake Stroll as the accelerated along the back straight out of turn 11.

Stroll also moved left, and the front of Alonso’s A522 hit the Aston Martin’s left-rear wheel. That lifted Alonso’s car into the air and sent him towards a barrier on the left-hand side of the track.

Speaking to media including RaceFans after the race, Alonso described how he feared hitting the fence while still in the air and suffering the kind of crash seen on IndyCar ovals.

“It was not nice because when you are up in the air obviously you are not aware of where you are on track,” he said. “I felt that I was much more on the left, and obviously if you catch the lateral fence, the metallic one, then you spin in the air 360.

“You see this kind of accidents a lot in IndyCar and they are quite dangerous. So I thought that I was ending up on that fence.”

The stewards blamed Stroll for the collision, handing him a three-place grid penalty for this weekend’s Mexican Grand Prix. They ruled he “made a late move in reacting to the overtaking attempt” of Alonso “by moving to the left”.

However after speaking to the stewards with Stroll, Alonso said he does not believe his rival made his move in reaction to his attempt to overtake.

“Honestly, when you see the thing on the TV I think it’s a racing incident to be honest,” he said. “We moved basically at the same time to the left and that was the trigger of everything. So I think it was a very unfortunate moment for everyone.”

“When you are at 300kph, those movements in one tenth of a second you move 200 metres,” he explained. “So if you see a slow motion and you go frame-by-frame, he will move a little bit later than me. If you go with normal speed, you see both cars more or less at the same time. So that’s why after looking on TV, I think there’s nothing you can do different.”

Alonso will join Stroll at his father’s Aston Martin team next year. He said the relationship between the pair is good.

Following the crash Alonso was astonished to discover he was able to continue in the race. “When the car landed on track I thought, okay, this is all safe [but] the car for sure is going to be broken,” he said. “I drove slowly to the pits thinking that we will retire the car.

“I was surprised when they changed the tyres and the front wing and sent me out. I said, okay, it’s just a test, they will call me in the next lap or whatever. But no, the car apparently was okay when they checked it visually, everything was fine, so we kept going.”

He went on to finish the race in seventh position. However the stewards later handed him a 10-second stop-and-go penalty, converted after the race into a 30-second time penalty, because his Alpine team allowed him to continue driving with a broken wing mirror which eventually fell off. That left him 15th in the final result.