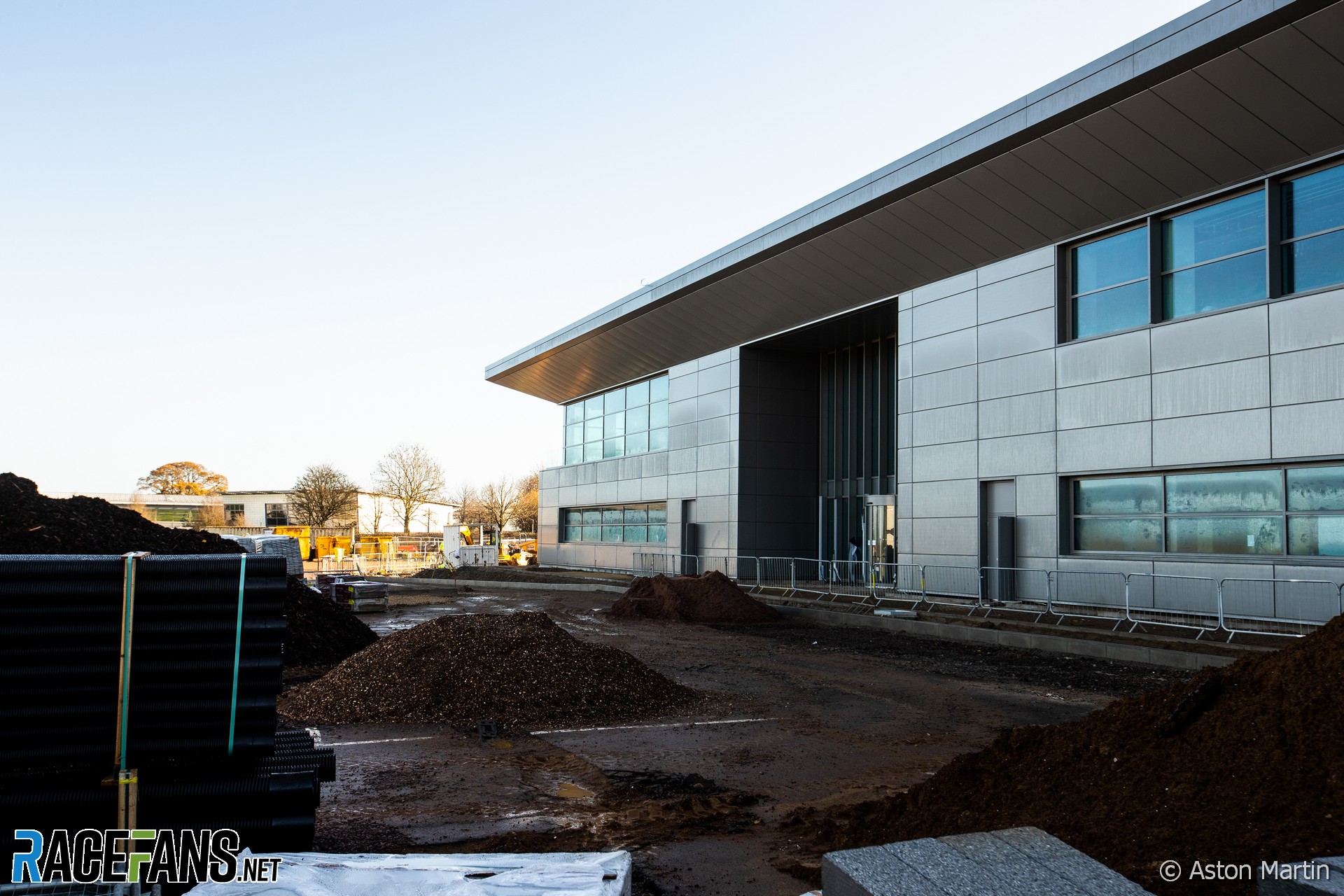 Aston Martin pulled off the shock signing of the summer by luring Fernando Alonso from Alpine to join them. He will race alongside Lance Stroll, son of the team’s owner Lawrence.

The billionaire who bought the team four years ago is serious in his desire to transform the outfit into championship contenders. For further proof of that consider the brand new, state-of-the-art, “game-changing” factory and wind tunnel they began building last summer. RaceFans visited the site on Friday as the project nears completion.

Based opposite Silverstone circuit the ambitious, 40-acre project will also provide space for a simulator as well as housing the team’s manufacturing, marketing and design teams. Built at an estimated cost of up to £200 million, the site will consist of three buildings.

The area of the factory where the team’s future cars will be designed and built is due to come into operation next year. The main building is expected to be ready a little later than the original targeted date of late 2022. The third building, which will be used as staff offices including a gym and catering, is not due to be completed until the end of 2024.

The new wind tunnel will allow the team to conduct its aerodynamic testing in house. This will be a valuable boost for the outfit which currently uses Mercedes’ facilities up the road in Brackley. Aston Martin’s will be ready in August 2024, according to technical director Dan Fallows.

“We’re hoping that we’ll have at least some contribution to the AMR25,” he told selected media including RaceFans. “Depending on how the commissioning and things at the tunnel goes, that will probably be the first car that we’ll be able to have a significant impact with a new tunnel.”

“In terms of the factory itself, obviously, that’s coming online next year in various stages,” Fallows adds. “So we’re hoping that the cars prior to that will obviously see the benefit of the new factory as well.”

After buying the team in 2018 when, under its former identity Force India, it plunged into serious financial problems, Stroll subsequently rebranded the outfit, first to Racing Point and then last year to Aston Martin. The return to a green livery echoed that of Jordan, the team’s original name when it entered F1 in 1991. It has passed through several hands since then, and its latest billionaire owner is pouring the necessary funds into the team to transform it into a front-runner.

It finished seventh in the standings this season on 55 points, tied with Alfa Romeo which pipped it to sixth place on count-back of their past results. Stroll evidently has ambitions for much more, and the team’s new factory is designed to deliver that.

Crucially, it will allow the design team to work together in an open-plan floor space situated in building one. Fallows predicts this will “significantly” change the dynamic between the team’s staff which are currently spread across different locations.

“We’ve got the small factory here, and we have these modular buildings where we have some people who are not necessarily designing parts of the car at the moment, but they are very connected to our design process,” he explains. “Having them not in the same room just makes it slightly more difficult to communicate with them.

“I’ve been in a big, open-plan office before with the ability to be able to walk around and talk to people very easily. It makes a huge difference in terms of those interactions and particularly the sort of serendipitous interactions where you can have a chat with somebody about one thing and go on to talk about a lot of other things. They often end up being the most creative conversation. That’s what we’re trying to build.”

Sustainability has been a consideration from the outset. All three buildings will incorporate solar panels, yielding a cost saving which will also help the team maximise its potential within the constraints of F1’s budget cap.

More than 750 trees have been planted by Aston Martin employees and partners in the surrounding area. The building faces north, meaning it will get the most direct sunlight through the day, especially in winter when the sun is at its lowest. It therefore requires a less powerful air conditioning unit, saving on costs and reducing its environmental impact. Down the middle of the main building, which project manager Guy Austin informs us is called ‘The Street’, a 160-metre window allows workers to benefit from natural light throughout the day.

The building will be the first new F1 factory built from the ground up in the UK since the McLaren Technology Centre opened in 2004. It hasn’t come cheap, but team principal Mike Krack is adamant the newest machinery and set-up will make savings in the long run.

“It will for sure,” he says. “You have the ability to make everything yourself, but you can also decide to buy or make it. You can make things faster, and if you can make them also cheaper, it means that you can make more. You can have maybe one or two upgrades more than before due to time and also due to financial reasons you couldn’t do. So from that point of view I think it’s a good step.”

There are the inevitable headaches which come with major building projects, some of which had been amplified by the current economic situation. The construction industry is struggling due to shortages of some materials and a lack of skilled workers. The competition for the latter is fierce and delays have arisen due to the difficulty of getting sufficient people on-site.

The land yielded additional challenges. The clay-rich earth has meant the wind tunnel site had to go through a ‘piling process’ to reinforce the ground. 550 piles of concrete were drilled into it to ensure it could withstand the required loads.

Fallows, who joined the team from Red Bull earlier this year, believes Aston Martin’s new facilities will enable them to compete with his previous employer. He contributed to the cars which took Max Verstappen to his world championships and brings Aston Martin the first-hand experience of what a modern F1 team requires to be competitive.

“There’s no doubt that it will be a world-class facility and having access to the wind tunnel 24/7 if required is obviously very important,” he said, anticipating the ever-tighter limits on aerodynamic development which will come if they rise up the championship order.

“As we improve, and our wind tunnel runs availability that we have from the aerodynamic testing restrictions goes down, clearly we wouldn’t be spending as much time in the tunnel. But having your own facility means you can do other experiments as well, which is invaluable. It’s something we don’t necessarily have the luxury of doing at the moment when we’re sharing a tunnel with another team.”

Aston Martin’s 2022 campaign began unpromisingly but ended with the team regularly scoring points. With Alonso arriving and cutting-edge new premises coming on-stream over the coming months, Lawrence Stroll is making it abundantly clear to his F1 rivals that his team means business.