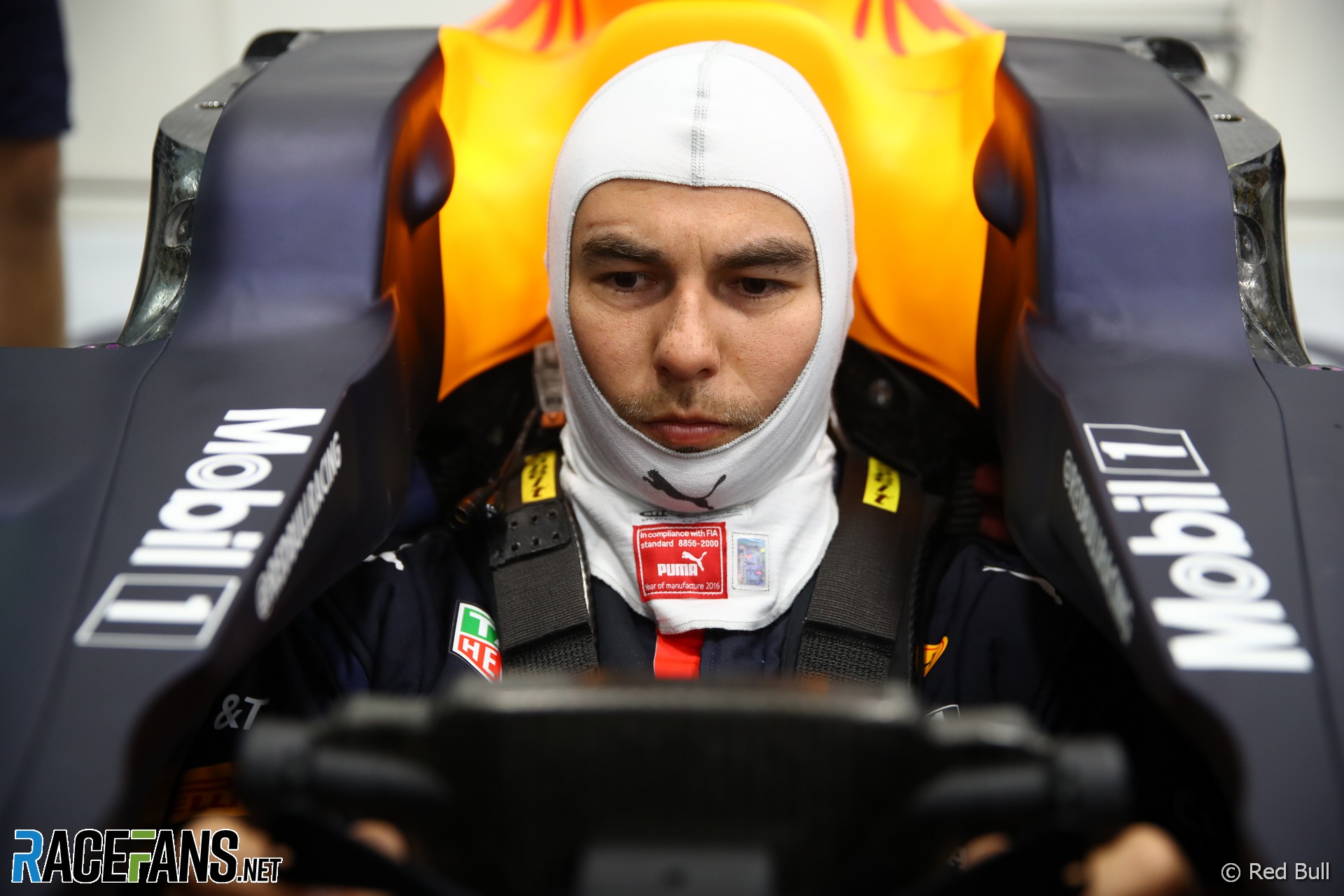 Sergio Perez – often referred to by his nickname Checo – made his F1 debut for Sauber in 2011 and before the end of his second season he’d signed to drive for McLaren. However that proved to be a short-lived relationship.

Perez started karting in 1996. In 2004, with the support of prominent Mexican businessman Carlos Slim’s Escuderia Telmex, he began racing in the Skip Barber series in the USA.

The following year he moved to Europe and spent two years in the German Formula BMW championship.

Arriving in Britain in 2007 he raced for T-Sport, winning the national (junior) championship that year before graduating into the main series. He began his 2008 campaign strongly with three wins in the first six races, but faded to fourth by the end of the season.

He moved up to GP2 the following year, finishing on the podium in both races at Valencia and ending the year 12th. Switching from Arden to Addax he had a stronger 2010, but was beaten to the title by Pastor Maldonado.

Before the season was over he was signed by Sauber to partner Kamui Kobayashi in 2011. He also joined the driver development programme of Sauber’s engine supplier Ferrari.

Perez became the first Mexican driver to start an F1 race in 30 years when he made his debut in the 2011 Australian Grand Prix.

He would have scored a point on his F1 debut after finishing seventh at Melbourne but the two Saubers were disqualified for a minor technical infringement. A top ten finish four races later in Spain delivered his first points.

Perez reached the final ten in qualifying for the first time at the next round in Monaco, only to crash heavily at the beginning of Q3. He suffered no serious injuries, but missed the race and withdrew from the following round in Canada as he continued to recover. Perez later said it took several races for him to return to full fitness.

Nonetheless he picked up more points in the second half of the season and regularly out-qualified the more experienced Kobayashi. He impressed at Suzuka, battling through the field to score despite being unwell. He even found time to play a joke on his team, telling them on the radio his car had lost power as he sprinted out of the last corner.

A mid-season test for Ferrari indicated he was a candidate to join the team in the future, though he signed a contract extension at Sauber for 2012.

The 2012 season got off to a strong start for Perez as he came close to winning a rain-hit race in Malaysia. But a poorly-timed final pit stop and a costly mistake meant he had to settle for second place behind Fernando Alonso.

Further podium finishes followed in Canada and Italy, raising speculation he might be hired by Ferrari as a replacement for Felipe Massa. However this was repeatedly discounted by the team’s president Luca di Montezemolo, who insisted Perez was not yet experienced enough.

McLaren disagreed with Montezemolo’s assessment of Perez and when they found themselves needing a replacement for Lewis Hamilton the Sauber driver was signed on a multi-year contract beginning in 2013. Team principal Martin Whitmarsh praised Perez’s “string of giant-killing performances” during 2012.

However after the McLaren deal was announced he failed to score again for Sauber. In Japan he spun out while passing Hamilton and he tangled with Sebastian Vettel and Bruno Senna in Brazil.

Disappointment swiftly followed Perez’s arrival at McLaren. Their 2013 chassis, MP4-28, was a poor successor to the race-winning car the team ended the previous year with.

It wasn’t even a match for the Sauber Perez had driven the year before. At the point Perez and McLaren parted ways, two races before the end of the season, neither he nor Jenson Button had finished a race higher than fifth.

Perez drew Button’s ire by banging wheels with his team mate during the Bahrain Grand Prix. Although he was usually on Button’s pace in qualifying his race results were less good and at the time his departure was announced he only had slightly more than half Button’s points haul.

After losing his McLaren drive Perez was signed by Force India for the 2014 season.

Determined to prove his abilities following a disappointing 2013, Perez got his season off to a strong start with third place in Bahrain – only the second time a Force India had made it onto the podium.

He almost achieved an even better result in Canada, running second behind the ailing Mercedes of Nico Rosberg in the closing stages. But he lost his grip on the top three in the final laps, and a last-lap tangle with Felipe Massa provoked a huge accident which Perez was held responsible for.

Although some way behind Hulkenberg in the final points standings, Perez at least enjoyed the distinction of having achieved Force India’s best result of the year, and his contract was extended into 2015.

In what was arguably his best season to date, Perez delivered all four of Force India’s top-five finishes including another return to the podium in Russia. The latter was somewhat fortuitous: Perez had just been demoted to fifth by Valtteri Bottas and Kimi Raikkonen when the pair tangled on the final lap.

Nonetheless Perez consistently got the best out of the team’s upgraded ‘B-spec’ VJM08 after it was introduced at the British Grand Prix. Once again his tyre-nursing skills were central to his success – ekeing out a long stint in Sochi was what got him in contention for a podium finish in the first place.

Although his first home race proved something of a disappointment as he trailed Hulkenberg at the flag, and he was mystified by his car’s handling in Brazil, he rounded off the season with another strong performance. He planted the Force India fourth on the grid in Abu Dhabi, and came home fifth behind the two Mercedes and two Ferraris. It’s doubtful the car was capable of more at that point.

Perez bolstered his reputation further in 2016 with two podium appearances in the space of three races, in Monaco and Azerbaijan. Third place in the latter could have been even better: He originally qualified on the front row but a grid penalty due to a gearbox change following a crash in practice meant he started seventh.

Force India overtook Williams as the leading Mercedes customer team thanks to these big results and consistent points-scoring by Perez, who was never out of the top ten in the second half of the season. He once again had the edge on Hulkenberg, who left the team at the end of the year to make way for Esteban Ocon.

The start of two fairly turbulent years alongside Ocon, 2017 saw Perez emerge having had the best of his team mate, beating him in the standings and in qualifying. However, it was by no means a smooth route to that as the pair collided early in the season, at Baku, again at the Hungaroring and finally, a truly destructive clash at Spa.

Force India banned them from racing each other in the later races but as Ocon gained experience and speed (in his first full season of Formula One) they seemed impossible to separate on track. Although they never collided as disastrously as the Belgian Grand Prix again, their close battle to come out best in the team saw Perez pushed hard.

A year dominated by Force India’s financial issues – which Perez would, ultimately, save the team from. Difficulties showed right from the start of the season and the team were unable to recapture the speed they had shown in the previous year, Perez recording more finishes outside the points in the first three races than he had the entire previous season.

However, he also claimed a podium at Baku following a dramatic late-stage overtake on Sebastian Vettel’s Ferrari, the team’s best result of the year. By the summer break, though, Force India’s problems had become too severe to continue and Perez activated a sponsor clause to push the team into administration and allow a buy-out, which was ultimately completed by Lawrence Stroll.

The team became Racing Point from the Belgian Grand Prix onwards but financial stability did not bring team harmony, with Perez and Ocon returning to clashing at the Singapore Grand Prix in an incident Perez took the blame for. He ultimately finished the year eighth in the drivers championship, four places ahead of Ocon.

Following the purchase of Force India by Lawrence Stroll, Lance Stroll became Perez’s team mate. Despite a relatively uncompetitive car, Perez was easily able to dominate Stroll in the standings and scored more than 70% of the team’s points in 2018, finishing tenth in the driver standings.

The team had viewed 2019 as a year of recovery, with grand plans for 2020’s car – which Perez and Stroll were confirmed to be driving again, Perez extending his contract with the team until 2022.

Racing Point’s 2020 started in controversy, as their much more competitive car was accused of being a clone of the 2019 Mercedes design. The issue would continue well beyond pre-season testing, into the eventual first races and end with the team being deducted 15 world championship points, taken equally from each car.

Perez scored twice team mate Stroll’s points over the season, finishing fourth in the world drivers championship after what many hailed as his strongest year in the sport. He was the first driver (followed by Stroll and Lewis Hamilton) to contract COVID-19, testing positive for the disease that had suspended much of the year’s racing before the Silverstone rounds and being forced to sit both the British and 70th Anniversary Grand Prix out, in isolation.

The most major controversy of the year, however, was in Perez finding himself ousted from Racing Point, despite being under contract to the team for two more years, for Sebastian Vettel. Perez went on to score his best results of the season, including a win at the Sakhir Grand Prix, while in the unusual situation of having no confirmed spot on the grid for 2021.

A rumour that Perez would replace George Russell at Williams never came to fruition and he ended the season on a career high but without a 2021 seat in F1. However a few days into the off-season his career was rescued by Red Bull, who confirmed he would replace Alexander Albon alongside Max Verstappen in their line-up for 2021.