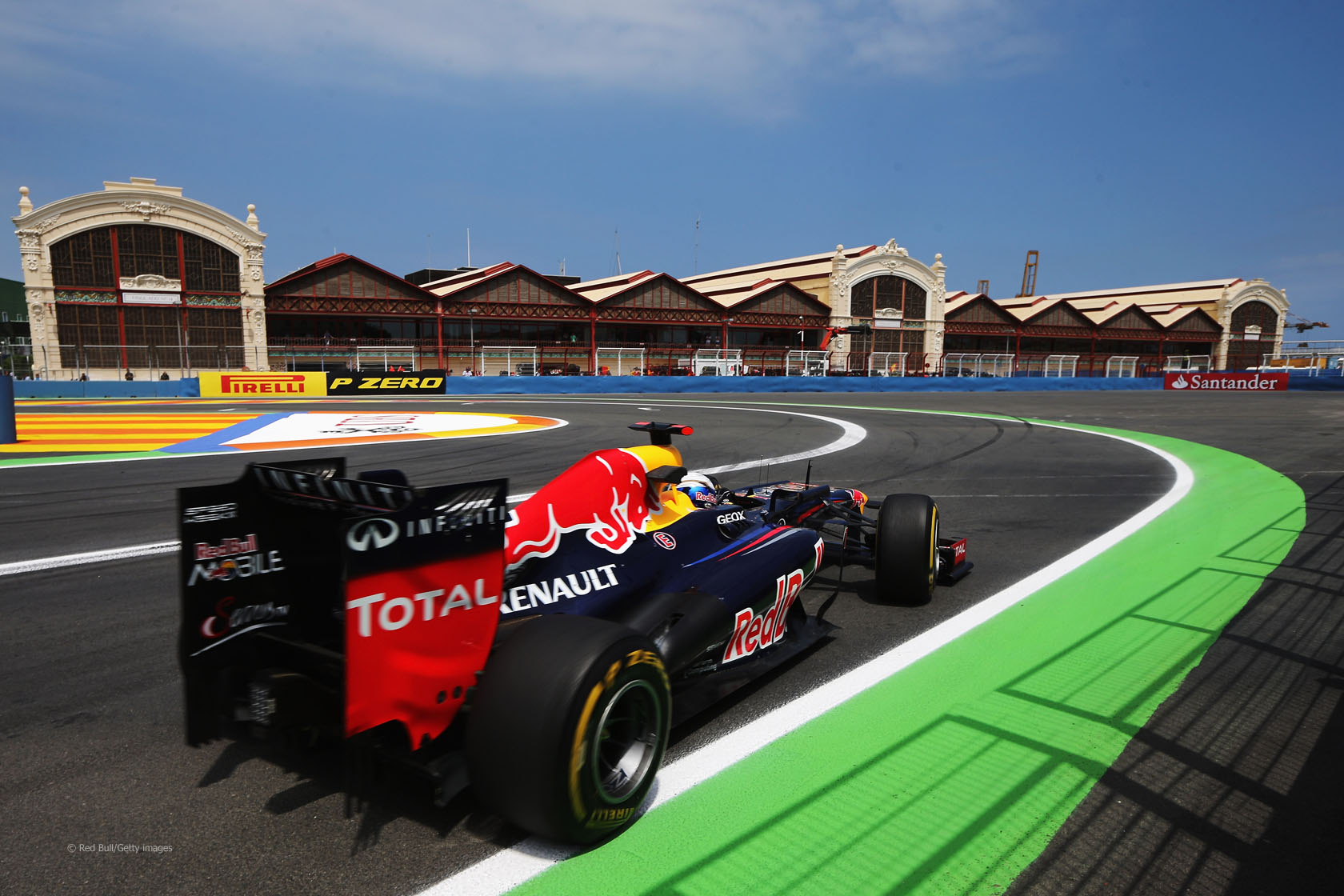 Sebastian Vettel was quickest in Friday practice in Valencia but admitted the competitive order could change on Sunday.

With temperatures expecting to rise over the rest of the weekend, the winner of the last two races in Valencia was cautious about his prospects: “The conditions will change again for Sunday I think; it was a bit cooler today, which will make a difference.

“It?óÔéĽÔäós close between the teams and it?óÔéĽÔäós not yet clear what the right strategy is for Sunday, hopefully we can make a step forward tomorrow.”

Conditions for practice at the Valencia street circuit were not as hot as expected, and much windier. Drivers generally found good life from the medium compound tyres – but the concern is whether this will still be the case later in the weekend when the track is forecast to be as much as 10C hotter. Lotus are one team which have tended to perform better in hotter conditions, but less well in qualifying. Romain Grosjean’s race-fuel stint looked particularly strong – even compared to Sebastian Vettel’s.

“The long run pace was there and the car felt good,” said Grosjean. “We still have a few things to try with the set-up, so there should be some more pace to come. Qualifying will be the big moment for us as we have seen that we need to find a little bit of improvement there.

“It?óÔéĽÔäós not the end of the world, as we have seen that we can make good gains on Sunday with our race pace. The trick will be to find more speed in qualifying without disturbing this.”

Fernando Alonso was less happy with his long run, saying the tyres “seem to degrade quite significantly here”.

In Canada Mercedes took great care not to over-stress their rear tyres, which has been a problem for them in earlier races. Nico Rosberg said: “Although it’s cooler today, the conditions are still really hot out there, but I believe that we understand the tyre work on the rears a bit better now. It was also difficult to avoid locking the front tyres in the braking zones.”

Traffic, yellow flags and a narrow window of optimum performance on the soft tyre meant quite a few drivers did not set times that were fully representative of their potential.

McLaren were particularly low down but Lewis Hamilton isn’t concerned: “We think we know what the problems were though, and how to put them right, so we ought to be fine for tomorrow.

“I?óÔéĽÔäóm quite confident that we?óÔéĽÔäóll have improved things for qualifying.”

Force India were an impressive second-fastest thanks to Nico Hulkenberg. Team mate Paul di Resta said: “Our single lap speed looks strong, as does the long run pace, and we appear to have a good feel for the tyres already.

“Given the pace we have shown today we seem competitive so hopefully we can challenge for the top ten in qualifying tomorrow.”

However Sauber appear to be running true to form with a car that is quick on a long run but not as good over a single lap.

“For me it was a rather difficult day because I wasn?óÔéĽÔäót happy with the balance of my car,” said Sergio Perez. “On low fuel I struggled a lot, while it was better on a high fuel load.”

After a series of difficult races, Jenson Button appeared to make some progress, though he admits there is still work to be done: “We did a lot of work to improve the front [wheel] locking, but we?óÔéĽÔäóre also going to go back on a few changes in order to get a car set-up that we know feels reasonably good. There are a couple of other changes we?óÔéĽÔäóre also considering for tomorrow which could be quite interesting.

I think we?óÔéĽÔäóre quicker over a single lap than the time-sheets suggest, but the car is still a little tricky to drive on [soft] tyres. I’m confident that the changes we’re now making will make a difference ?óÔéĽÔÇŁ but whether that will be enough to challenge at the front is still an unknown, because the field is so extremely competitive right now.”

With each passing race, Toro Rosso seem to slip further from the midfield group and Caterham close in on them further. Today’s practice indicated the trend is continuing.

Heikki Kovalainen said: “In [second practice] we ran a new version of the front wing and the initial feel it gave was good – it’s too early to tell how much it’s worth but it’s a good sign that what was predicted in the factory seems to have worked on track.

“There’s more to come for the next race but this looks like it could be a good step.”

17 comments on “Vettel not taking Friday lead for granted”