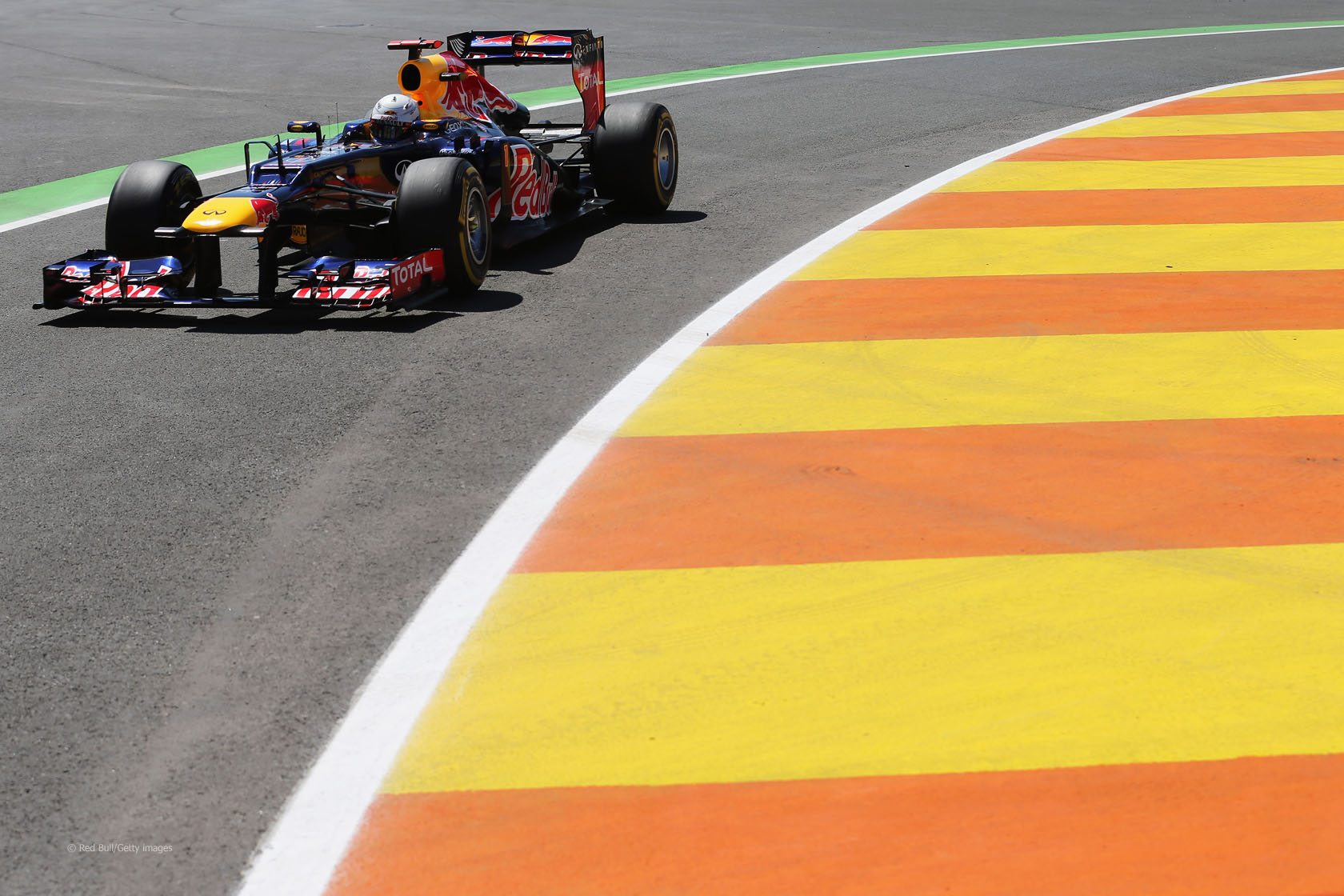 Red Bull say they’ll be in a good position for the rest of the season if they are competitive at Silverstone.

But Ferrari also fancy their chances – and McLaren expect Red Bull won’t enjoy the performance advantage they had in Valencia.

The development competition runs the length of the field and Caterham have high hopes for this weekend, readying a “significant upgrade” for their CT01.

This weekend’s race will be the third at the remodelled Silverstone (the second with the new pits at start line).

It’s one of the longest-running venues on the calendar. Back in 1956 the race lasted almost three hours and covered 101 laps. Today the lap count is barely more than half that – just 52 – despite the track being little more than a kilometre longer.

Silverstone’s sequence of high-speed corners is well-liked by the drivers, so much so that new circuits like Austin have borrowed heavily from them. “It is one of those classic races that bring a smile to your face when you think of some of the corners,” said Nico Hulkenberg.

“I actually describe it as an ‘old-school’ circuit because it?óÔéĽÔäós narrow and you have to be really committed and brave through the quick parts of the lap. It?óÔéĽÔäós super-fast and great fun when you hook up the perfect lap.”

Felipe Massa added: “It is definitely one of the favourites, probably for 99% of the drivers, because it really flows and has some challenging high speed corners.”

Pirelli will supply their hard and soft tyres, as they did last year, though there are chances of a repeat of last year’s rain-hit weekend. The race began in damp conditions and the track was drenched on Friday.

One consequence of the changes made last year is that the time lost when making a pit stop is very low – so much so that last year stewards tended to issue stop-go penalties instead of drive-through penalties for incidents. Red Bull showed formidable pace in the opening stages of the European Grand Prix. But the cooler conditions and high-speed layout of Silverstone are a marked departure from Valencia’s high temperatures and slow corners. So will they be as quick?

Christian Horner believes that if they are, it will strength their championship position: “If we can be competitive at Silverstone as well as Valencia then that gives us a lot of optimism for the rest of the season.”

Red Bull’s form at Silverstone is excellent: three pole positions and two wins in the last three years, and a 2-3 podium finish in the one they didn’t win.

But that success has not come without some intra-team tensions. Mark Webber infamously declared his 2010 victory was “not bad for a number two driver” after being forced to surrender a front wing upgrade to his team mate. Last year the team ordered Webber not to try to to pass Sebastian Vettel in the closing stages – he ignored them, but was not successful in his efforts.

The RB8s will sport a different look this weekend as they will feature the pictures of thousands of fans in support of their Wings for Life charity, as they previously did in the 2007 race.

Lewis Hamilton indicated McLaren should have an upgrade package for their home race, though it remains to be seen what they may bring.

Having had the car to beat in the opening races, McLaren find themselves increasingly under pressure from the likes of Red Bull and Ferrari.

But the MP4-27 has been quick on tracks with high-speed corners this year: notably at the Circuit de Catalunya, where Hamilton had more than half a second in hand in qualifying. And their pit stops have been getting quicker, though it remains to be seen if they can get through a race without spoiling at least one of them.

There’s an air of confidence at Ferrari heading into this weekend’s race. The revisions made to the F2012 in the last four races have clearly worked, and Fernando Alonso is leading the drivers’ championship by 20 points.

“Who knows, maybe Silverstone can be even better than expected for us,” said Massa. “But if you look at Valencia where we had 13 cars in three tenths in Q2, it shows you really cannot make predictions this season.

“However, we believe our car is not too bad in the high speed corners and so I feel we should discover a good F2012 when we start practice there on Friday.”

Both Mercedes drivers were making rapid gains in the closing stages at Valencia. Nico Rosberg has raked in most of their points so far but Michael Schumacher appeared to have turned a corner with the first podium finish since his comeback, which could make for an interesting competition between the two in the races to come.

Potentially their best chance of a win so far slipped through their fingers at Valencia. The E20 seems to respond well to high track temperatures and abrasive track surfaces – Silverstone has more of the latter than the former.

How well they do on Sunday may ultimately be dictated by whether they can reduce the gap to the front row on Saturday. It will also be fascinating to see if the pendulum continues to swing from Kimi Raikkonen towards Romain Grosjean. This year Force India are the tortoise to the hares of Sauber and Williams: the latter have the podium finishes but Force India’s steady points-hauling has kept them in contention in the championship.

For their first home race of the year (the factory is across the road from the track) they have their best chance of a strong result so far. Further upgrades are planned for the VJM05 which scored its best result of the year last time out in Hulkenberg’s hands.

Team mate Paul di Resta qualified a career-best sixth here last year and was running strongly until a problem in the pits scuppered his race.

Both drivers are enthusiastic about Silverstone. Sergio Perez is targetting an improved qualifying performance having been in the lower reaches of Q2 in the last two races.

The team tested at Misano prior to this race. Daniel Ricciardo will be returning to the track where he made his F1 debut last year, while Jean-Eric Vergne needs a solid weekend after a poor outing in Valencia.

The last race was the usual 2012 story for Williams: Pastor Maldonado quick until he made a mistake, Bruno Senna off the pace. Surprisingly the latter has not raced at Silverstone in F1 before.

The team are hopeful that Silverstone will be a strong venue for them following Maldonado’s success at the Circuit de Catalunya. Caterham are talking up their chances ahead of Silverstone in a big way. New performance director John Iley said they are bringing a “significant upgrade” including a revised floor and changes all over the car.

These should be available for both the CT01s, unlike the situation in Valencia where only Kovalainen was able to run the latest parts.

Iley says that upgrade was worth two to three tenths of a second and the latest should bring “significantly more”. Their aim is to get both cars into Q2.

Pedro de la Rosa is another driver who likes the track but is expecting a hard weekend: “It?óÔéĽÔäós not the most favourable circuit for us so we?óÔéĽÔäóre going to have to grind our teeth because, apart from that, it?óÔéĽÔäós also one of the toughest tracks for a driver.”

Marussia were anticipating a step forward this weekend with a new aerodynamic package produced after some of their first work with a wind-tunnel.

But the dreadful accident suffered by Maria de Villota while testing the changes yesterday will surely cast a pall over their weekend.

If you’re heading to Silverstone for this weekend’s race, we want to hear from you.