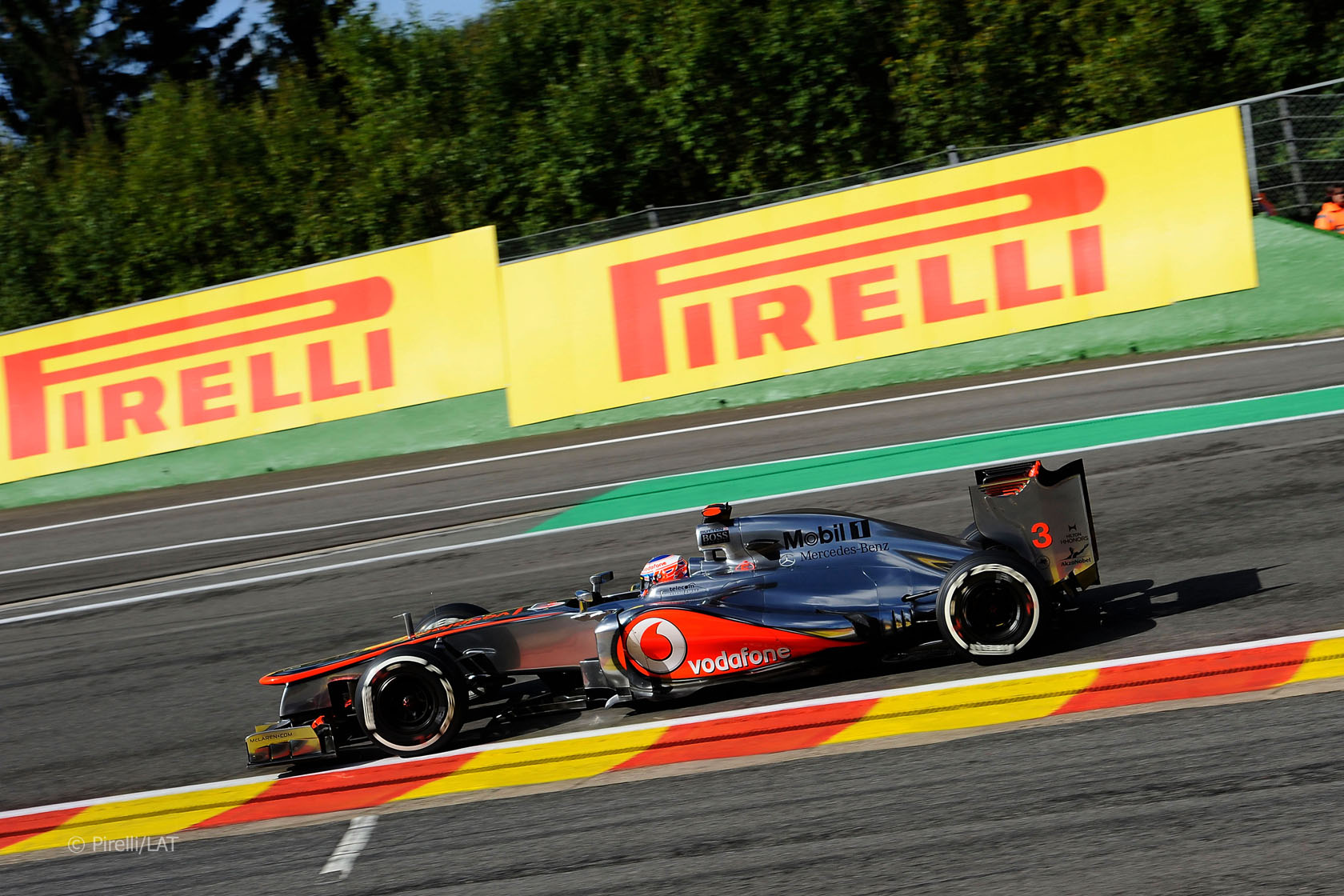 Jenson Button took pole position comfortably for the Belgian Grand Prix. But he’s not taking a win on Sunday for granted.

He may be the only driver in the front two rows to have won a race this year but the likes of Kimi Raikkonen and the Sauber drivers could prove genuine contenders for victory.

Button admitted some surprise at just how well McLaren’s new Spa-specification rear wing worked: “I?óÔéĽÔäóm surprised that the new rear wing is working so well, but the engineers also did a great job with the balance.

“And it?óÔéĽÔäós even more encouraging that we had good consistency through all three qualifying sessions. Nonetheless, nobody has done any long runs yet, so we still need to wait and see how tomorrow pans out.”

There’s been little to choose between Button and fellow front-row starter Kamui Kobayashi in terms of their places won and lost at the start this year. But Raikkonen, who starts third behind them, has gained one place on average per race.

The long run from La Source through Eau Rouge to Les Combes offers a superb opportunity for slipstreaming and making up places. Nico Rosberg used it to brilliant effect last year, taking the lead off Sebastian Vettel.

Raikkonen’s lap one move from 2009 is well-remembered – he drove off the track at turn one, gaining several places. The stewards have cracked down on such antics since and drivers will expect not to be able to get away with it again. The limited dry running has left teams with many unanswered questions about the performance and degradation of the tyres for this weekend’s race.

Pirelli have supplied the hard and medium compounds, and every driver in the top ten will start on the latter. Pirelli reckon it’s six to nine tenths of a second per lap faster than the hard, and drivers will have to make two or perhaps three pit stops.

However it’s clear from the sector times below that there are considerable differences in the set-ups being used, even within the same team as in the case of McLaren. This could lead to variations in tyre warm-up (crucial as the weather is expected to remain cool) and how quickly the tyres start to go off. But teams are going to have to play it by ear.

One team that have often enjoyed superior tyre performance this year are Sauber. With their drivers second and fourth on the grid they are well-placed to spring a surprise.

Fernando Alonso is confident he can make progress from fifth on the grid but we could also see Hamilton, Grosjean and, later, the Red Bulls putting him under pressure.

The lack of running on slick tyres is not a concern for Alonso: “The fact we don?óÔéĽÔäót have data on tyre life is not penalising, as we are all in the same situation. Anyway, we know both compounds well so I don?óÔéĽÔäót expect any problems on this front.”

Significantly, Perez’s Q2 time would have been good enough for him to take third on the grid. As the table below shows he lost time in the middle sector.

“I’m not too happy because my last lap in Q3 wasn’t perfect,” he said. “I had the feeling the car was performing differently to this morning.”

Heikki Kovalainen had a DRS problem and was 1.6s slower than the next fastest car in Q1 (Rosberg’s Mercedes, before his penalty).

The sector times reveal a clear split between the drivers who are quickest along the high-speed straights of sectors one and three, and whose car is quickest through the corners in the middle sector.

In the former camp are Button (with McLaren’s Spa-specific rear wing) and the Ferraris; in the latter Hamilton (without the new wing) and the Saubers.