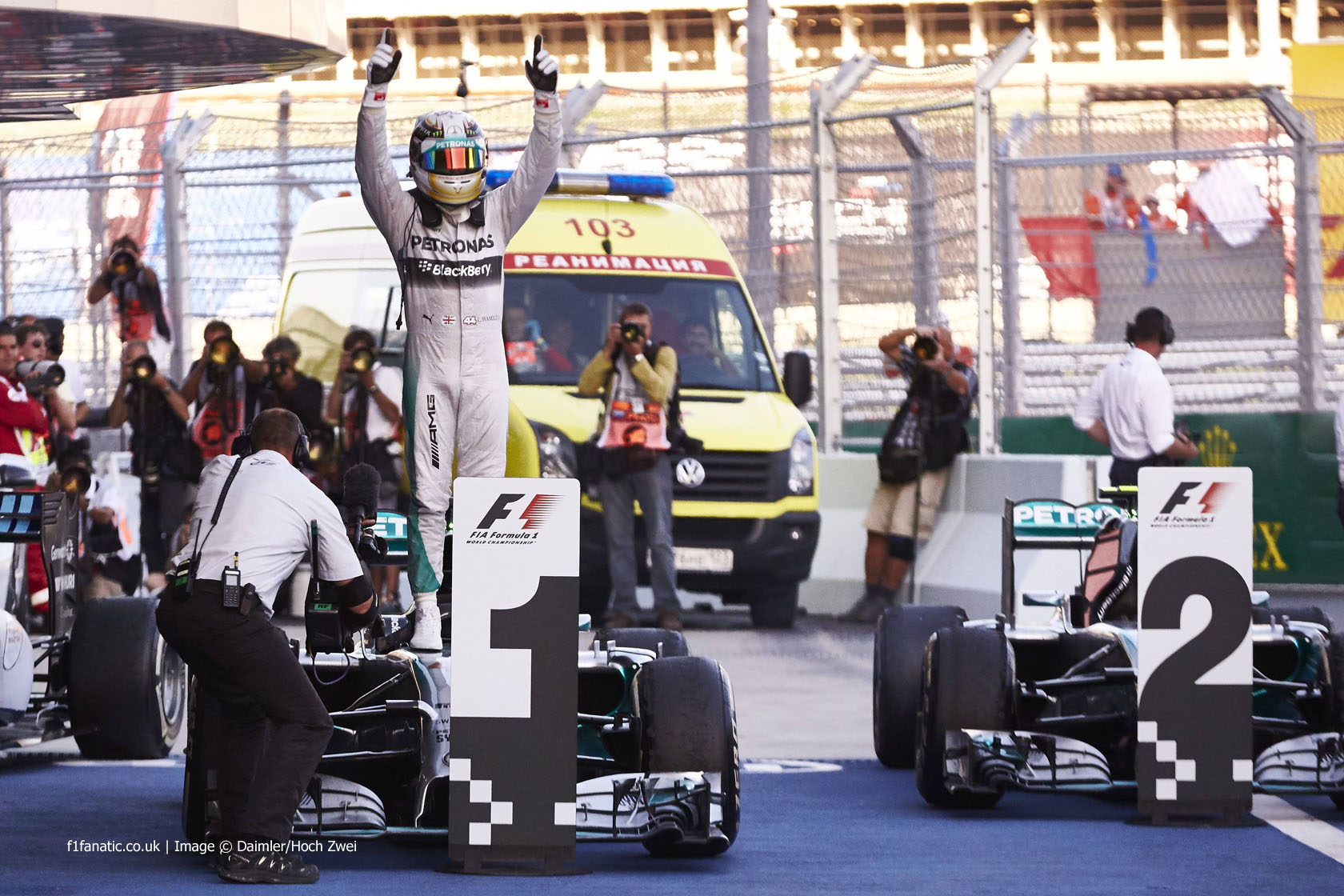 Lewis Hamilton joined Nigel Mansell as the sixth most successful Formula One driver in terms of race wins by taking the 31st victory of his career at Sochi.

One more victory will make Hamilton the most successful British driver of all time in terms of race victories.

If Hamilton shared Sebastian Vettel’s fondness for setting fastest laps, he might have achieved his second ‘grand slam’. He led every lap of the race – for the fifth time in his career – and set pole position, but was beaten to fastest lap.

That went to Valtteri Bottas, for the first time in his F1 career. That means two-thirds of the 21 drivers who raced on Sunday have set fastest lap at least once – the ones who haven’t being Daniel Ricciardo, Kevin Magnussen, Pastor Maldonado, Jean-Eric Vergne, Daniil Kvyat, Marcus Ericsson and Max Chilton.

Sunday’s race ensured that Hamilton will win more races than anyone else this year. But despite taking his ninth win to team mate Nico Rosberg’s four, it wasn’t until the 39th lap of the race that Hamilton surpassed Rosberg in terms of laps led this season.

Hamilton’s fourth consecutive victory equalled his personal best streak, set earlier this year. If Mercedes continue to finish first and second in the remaining three races, Rosberg now has to win all of them to beat his team mate to the championship.

Hamilton is 17 points ahead of Rosberg and therefore cannot win the championship at the next race. If his lead over Rosberg after that race is less than 25 points, then the championship cannot be decided until the double points finale in Abu Dhabi. Unless Mercedes unreliability strikes Rosberg again, that is unlikely to happen.

With Ricciardo now 92 points behind Hamilton and with a maximum of 100 available over the final three races, it is highly likely the next round of the championship will ensure the drivers’ title is won by one of the Mercedes pair.

Work out how the drivers’ championship could be decided using F1 Fanatic’s Points Calculator:

A new round of the championship Russia became the 31st country to host the world championship, and Sochi Autodrom is the 71st different venue to have held a round. Home driver Daniil Kvyat was therefore especially delighted to achieve his best-ever starting position of fifth. This was also the highest starting position for a Russian driver – Vitaly Petrov never qualified higher than sixth.

Although this was Kvyat’s home race, Russia is a vast country and his home city of Ufa in Bashkortostan is 1,500km from Sochi. To put that into perspective, eight of the circuits on the 2014 F1 calendar lie within 1,500km of Vettel’s home town of Heppenheim: Silverstone, Circuit de Catalunya, Hungaroring, Spa-Francorchamps, Monte-Carlo, the Red Bull Ring, Monza and the Hockenheimring.

Jenson Button and Kevin Magnussen scored McLaren’s best result since their two-three finish at the season-opener. That moved them ahead of Force India in the championship.

Maldonado broke new ground in a minor way by becoming the first driver to carry over part of his grid penalty from one race to the next. Under the new power unit penalties introduced this year if a driver receives a grid penalty but cannot serve all of it at one race it carries over to the next, but no further.

In Maldonado’s case he only qualified 20th and so the grid penalty had little effect. Chilton was then given a gearbox change penalty, making Maldonado’s completely inconsequential, until he too changed gearboxes, which finally moved him to the back of the grid. Complications such as this are likely to continue as engine and gearbox life is strained over the final races.

Mercedes wrapped up the constructors’ title in style. Hamilton and Rosberg occupied the front row of the grid for the ninth time this year and the fifth race in a row.

In the race they claimed their ninth one-two finish this year. One more will equal the all-time record of ten, set by McLaren in a 16-race season in 1988 (this year there are 19 rounds),

Mercedes are the 15th different team to win the constructors’ championship. The title was introduced in 1958, so although Mercedes were the dominant force in F1 in 1954 and 1955, there was no teams’ title for them to win.

Among the previous winners of the championship is the previous incarnation of the Brackley-based team, Brawn GP. As are the 1971 constructors’ champions Tyrrell, whose F1 entry was purchased by Craig Pollock in 1998 to form the British American Racing team, which eventually became Mercedes by way of Honda and Brawn.

Spotted any other interesting stats and facts from the Russian Grand Prix? Share them in the comments.