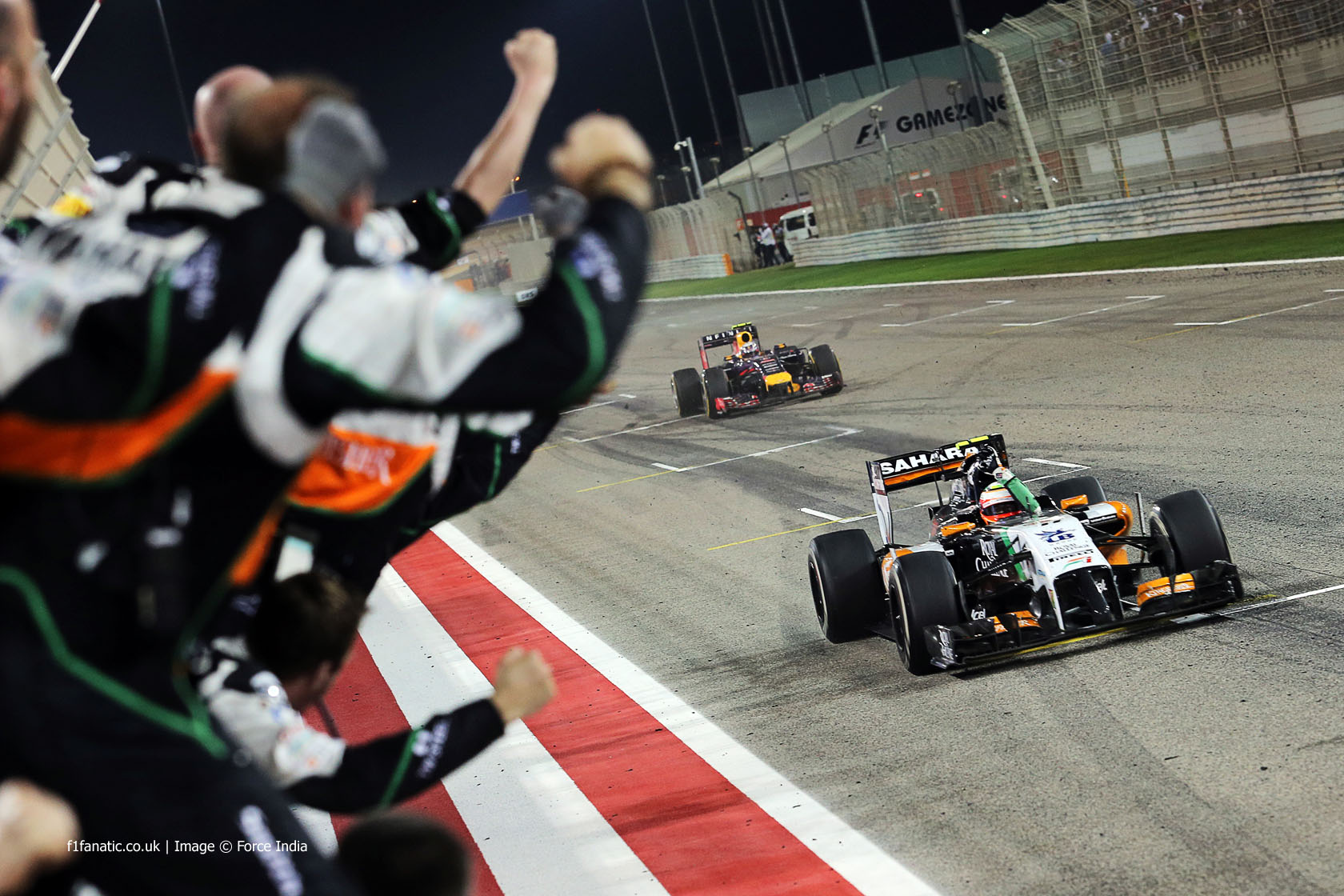 Force India ended the season sixth in the championship – equal their best-ever result, which they’ve now scored in three of the last four seasons.

And having taken only 13 races to match their previous best haul of 109 points, this was clearly Force India’s most impressive season in their seven-year F1 history. The Silverstone-based squad hasn’t finished higher since its Jordan-Honda days in 2001.

This brings advantages beyond securing a portion of F1’s prize money. Force India is not one of the five teams which automatically gets a place on the powerful Strategy Group, but having been first in the championship out of the remaining outfits, it will take the sixth place in the group which was previously occupied by Lotus.

A substantial part of the credit for Force India’s success has to go to its Mercedes-Benz PU106A V6 turbo hybrid engines. But the foundations of their impressive 2014 campaign were laid in the first half of last year.

A strong start to the 2013 season gave Force India the luxury of being able to devote all its efforts to the VJM07 ahead of time. This was especially important for a team which lacks the resources of larger teams.

Indeed for much of 2014 it looked as though Force India would pull off a shock by demoting one of those teams – McLaren – to last among the Mercedes-powered runners. Force India’s Woking rivals only passed them for fifth in the championship with three races to go.

As last year, Force India hit the ground running. Nico Hulkenberg finished all of the first four races in the top six, and Sergio Perez gave the team its second-ever podium finish in Bahrain. As F1 returned to Europe for round five, Force India held a remarkable second place in the constructors’ championship.

It couldn’t last. Sure enough Force India slipped back down the order partly due to the superior development capacity of their better-resourced rivals, and partly because Williams, having built a better car, finally started to get the best out of it.

A shot at a big points haul went begging in Canada. Perez was pressuring Nico Rosberg for the lead at one stage, and had he not been frustrated by the hobbled Mercedes repeatedly staying one second clear of him at the DRS detection point, Perez could have made a run for it. Instead he came under attack from behind, and an incautious defensive move while under attack from Felipe Massa caused a major crash.

The team’s line-up of returnee Hulkenberg and McLaren refugee Perez served it well for the most part, and both have been retained for next year. Hulkenberg was the lead points-scorer but on days when tyre preservation was a greater factor Perez often came to the fore. Conversely, problems with tyre warm-up were at the root of Perez’s too-frequent indifferent qualifying performances. Hulkenberg could usually be relied on to stay out of trouble, though he committed an uncharacteristic faux pas in Hungary by colliding with Perez. Hulkenberg was out on the spot and Perez found the barrier on his own a few laps later, resulting in the team’s first of just two point-less weekends all year.

The other came at Austin, where Perez slipped up by colliding with Sutil on the first lap. In a double blow, Hulkenberg ran over the debris and had to pit for repairs, then later retired.

This was a blow to their hopes of getting back in front of McLaren. At this stage of the season, despite a steady stream of upgrades, the VJM07s were increasingly out-gunned in qualifying. The effect on Hulkenberg’s qualifying positions was especially striking: having started in the top 11 for the first 11 races, he failed to do so for the rest of the year.

However the team made a timely resurgence ahead of the double points finale in Abu Dhabi, which was partly explained by them having resolved a sticking point in the development of their car. Hulkenberg and Perez came home sixth and seventh, the team’s best result since Bahrain.

But that 26-point margin to McLaren must have left a nagging feeling that, although 2014 was a very good year for Force India, it could have been even better.