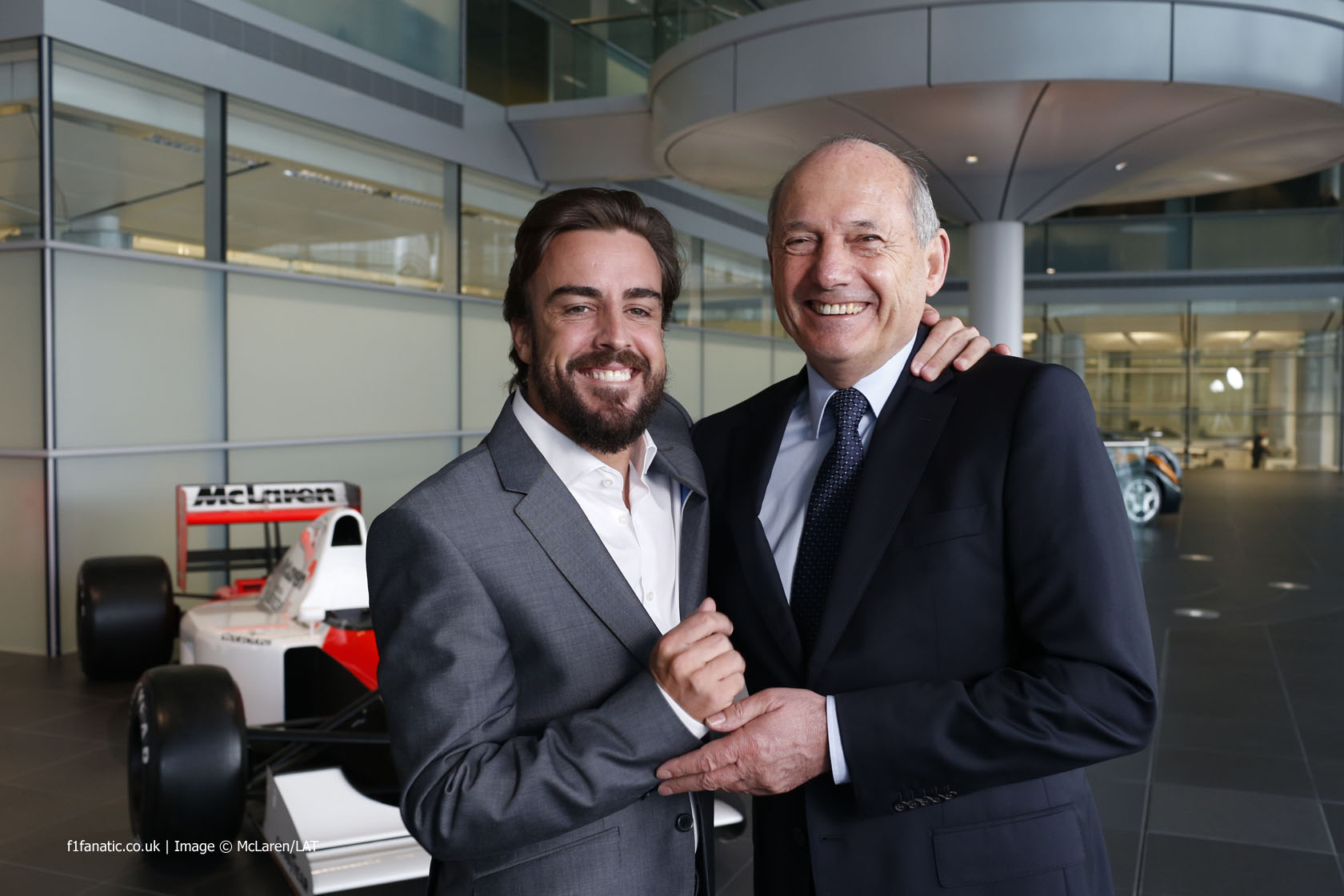 Fernando Alonso and McLaren CEO Ron Dennis agree they have “unfinished business” together following Alonso’s return to the team.

Although the news was only confirmed today, Dennis revealed the contract with Alonso for 2015 had been signed several weeks earlier, but the announcement was delayed while the team decided who his team mate would be.

Alonso has returned to McLaren seven years after splitting from them on acrimonious terms. Speaking in a press conference at the McLaren Technology Centre today Alonso admitted having regrets over how their relationship had unravelled.

“It was not the best feeling, 2007,” said Alonso. “We arrived with good motivation and we fought for the championship until the end. At the end we split for different reasons.”

“But as I said before in all those years inside I have only one thing remaining in Formula One to do – I was happy, I’m happy with everything that I’ve done, apart from 2007. I didn’t achieve or deliver the best of myself.

“So now some years later, you are more mature, you learn things, you understand things that probably you didn’t at 25 years old, and now I arrive to finish this job that I started in 2007. This was the first and the main priority to come back.”

Dennis said he has “mellowed” since 2007, and that he didn’t handle the situation between Alonso and his team mate Lewis Hamilton as well as he could have done.

“By and large those challenges you have between drivers we’ve had in previous championships with Alain [Prost] and Ayrton [Senna] several times, I’ve always been able to manage to defuse. But this one got away from me.

“I look back on my contribution to that with exactly the same emotion that Fernando expressed which is that you regret the mistakes you made in your life but sometimes you can’t change what’s happened.

“Could I have engineered a way out of it? Well I could probably have done things better but the reality is you look back on your mistakes if you’re honest with yourself, and you accept it and you intend not to repeat them, you put yourself in the frame of mind and a position, so actually you over-compensate. So I don’t anticipate any issues between Fernando and I.”

However Dennis added Hamilton had also contributed to the breakdown in relations between Alonso and McLaren. “To go back to that period if you look at the chemistry we had Lewis, young guy, understandably perceived by many people as the chosen one,” he said. “But also someone who had immaturity.”

“Really, if you go along the ‘who struck the first blow’ route, you know actually I would say that Lewis had his role to play in starting this process which escalated.”

Dennis said both he and Alonso must rely on each other in order to deliver the success they and Honda desire.

“We both desperately want to win,” he said. “One of the things that I really respect in Fernando is the fact that he chose to change direction, leaving one of the most successful teams in Formula One and coming back to McLaren and really addressing what we both feel is unfinished business.”

“We both want to win – and of course all the drivers, Jenson [Button], Kevin [Magnussen] want to win – but this is a different type of winning. This is winning which has never been so underlined. What do I mean by that, well, we all have more to prove than ever before.”

88 comments on “Alonso & Dennis have ‘unfinished business’ at McLaren”