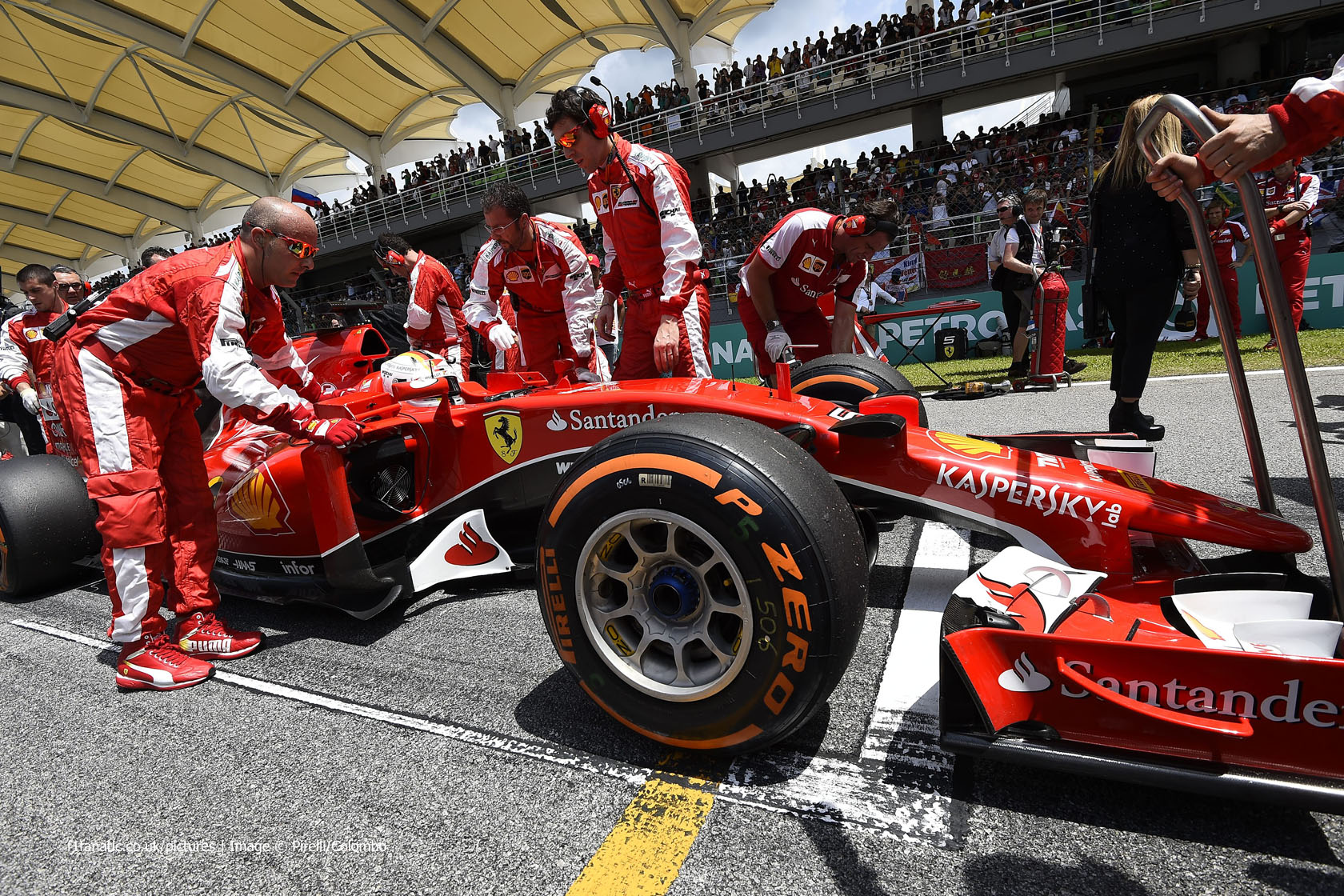 Sebastian Vettel has overwhelmingly been voted Driver of the Weekend after his somewhat surprise victory in the Malaysian Grand Prix.

Vettel scooped a staggering 66.4% of the vote after becoming the first driver to beat either Mercedes car to a race win on pure speed in over twelve months. He is the most emphatic winner of the poll since Nico Hulkenberg in the 2013 Korean Grand Prix.

It was am impressive weekend for the new Ferrari man, as he was on the pace in every session and in all conditions, giving the Scuderia their first grand prix victory in almost two years, and making amends for his win-less 2014.

Vettel made everyone sit up and take note on Friday afternoon, where his race stint lap times were comparable to those of the Mercedes pair, but showed that the Ferrari was treating its tyres better.

But on one-lap pace the Ferrari still looked to be around half a second off the Mercedes. Rain arrived during qualifying however, and as last year Vettel took advantage.

With the Mercedes drivers seemingly more preoccupied with beating each other, neither managed to improve on their final run on a drying track. Meanwhile Vettel snuck in a gem of a second lap, crossing the line less than a tenth of a second slower than Lewis Hamilton’s pole time.

“Not again!” Vettel exclaimed when he realised Hamilton had pipped him by a few hundredths for the second year in a row. But he avoided a repeat of last year’s start by successfully defending his second place for Nico Rosberg on the run to turn one.

The appearance of the Safety Car played into his hands as both the Mercedes drivers headed for the pits. Once the race resumed the two silver cars had to pick their way through the traffic while Vettel opened up a gap at the front of the field.

Even after Hamilton and Rosberg reached clear air they were never really able to do significant damage to Vettel’s lead. He made one pit stop fewer than them, which further strengthened his position. As a result he claimed his first win for Ferrari on only his second attempt – something he nor the team probably didn’t expect would happen so soon.

He was impressive in rain hit qualifying, almost defeating Mercedes, which have more downforce. Of course, Ferrari’s gamble in the race paid off, but Vettel was pretty much in control during the race: attacking and managing the gap when necessary. The emotions after the race just adds to that special race for Ferrari and Vettel himself, who looks like a reborn and stronger force within F1.
@Osvaldas31

Usually I have more than one choice for these, but for me there was one stand out above the rest. Sebastian Vettel.

Vettel beat a Mercedes in qualifying. Yes it was raining, however, they were clearly running less downforce which should make it harder in the rain, yet still beat a Mercedes. Very good. Then in the race, he did everything he needed to, stayed in contention before the safety car, pulled away after, showed some impressive speed and consistency as well as great tyre management and on top of that he did make some crucial (albeit relatively easy) overtakes. Overall, a very, very good race from Vettel.
@Philereid The other Ferrari driver also featured highly in the vote: Kimi Raikkonen missed the cut for the top ten in a hectic Q2 session and picked up a puncture at the end of lap one, but nonetheless recovered to finish an impressive fourth. He took 17.6% of the vote – more than anyone besides his team mate – while discussion surrounded how far he was to blame for his poor grid position.

To finish where he did, coming back from last place was a good drive and he’s generally been very quick, unfortunately it was the team’s mistake for his Q2 misfortune.
@Rigi

Raikkonen was behind Ericsson when starting his lap, so there was no reason to go four-tenths slower than Ericsson, who managed to go on to Q3.

He didn’t have an advantageous position at the head of the pack but he was still in a position to set a time decent enough for Q3 and he failed at that.

He was one of the better drivers on Sunday but for his inability to qualify, I can’t nominate him for Driver of the Weekend.
@Mattds

While the Ferrari pair were highly-rated, their primary customer team’s drivers were not. Australia Driver of the Weekend winner Felipe Nasr failed to pick up a single vote. Toro Rosso’s Max Verstappen, however, picked up enough votes to be the third highest voted driver after becoming the youngest ever point scorer.

I was impressed with Verstappen, especially at the start and the first two corners. He was totally boxed in and did not make any mistake. He did not touch anyone, although losing a couple of places during the first lap. He showed maturity that I had not seen with the other rookies – Sainz (Melbourne) and Nasr (Malaysia) both hitting Raikkonen trying to much to defend their position.

Verstappen’s battles in both overtaking and defending were also showing of maturity and not once did he look out of control. He did have one small moment going into the pits where I think he just lost a bit of concentration, but for the rest an excellent weekend for the just only 17-year-old.
@Leendert82

And finally @Coldfly wanted to put a new spin on ‘Driver’ of the Weekend:

Maurizio Arrivabene – ‘driving’ Ferrari to the current level of success by bringing the whole team together (as opposed to some other team leaders).
@Coldfly

20 comments on “Emphatic Driver of the Weekend win for Vettel”