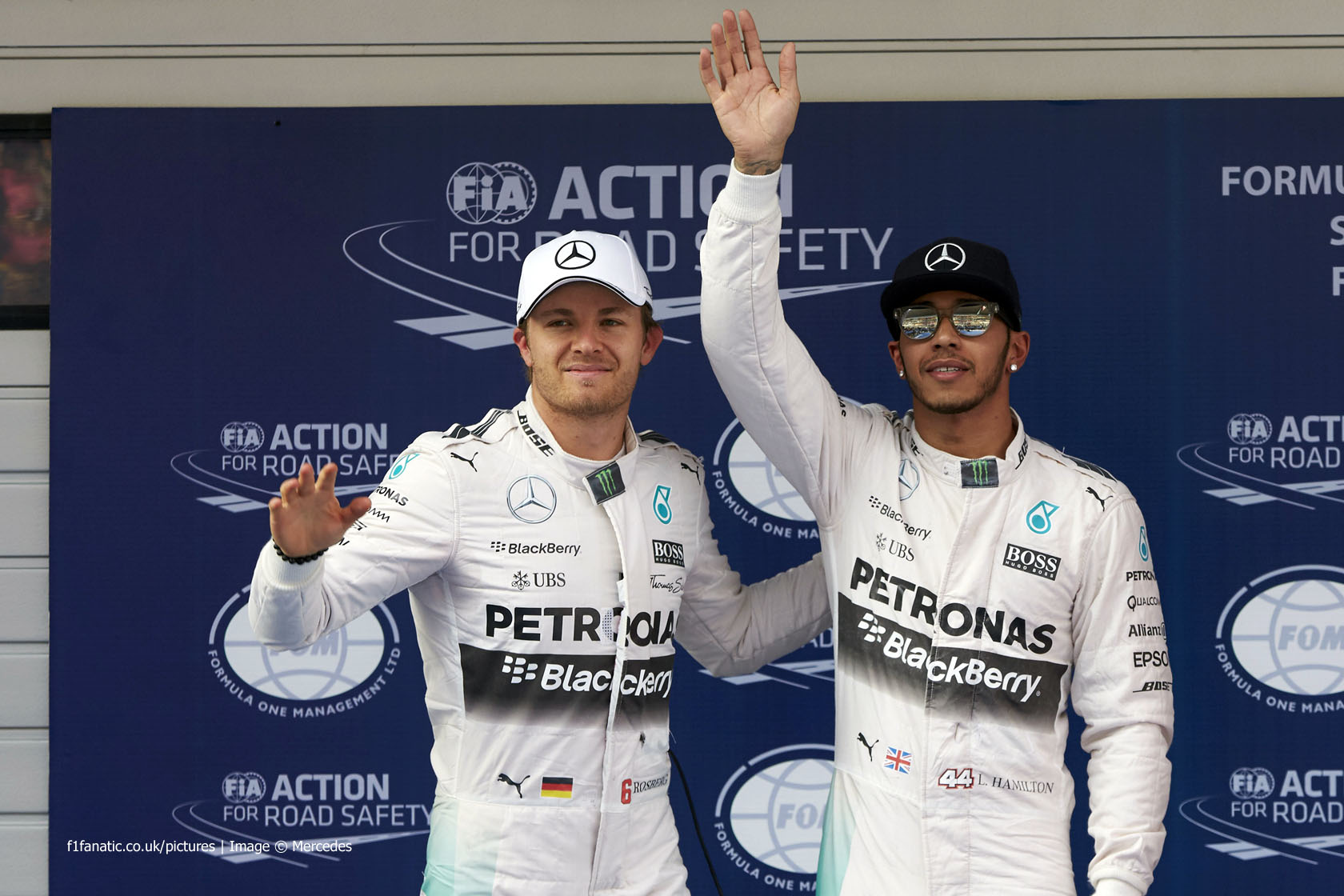 Lewis Hamilton continued his monopoly on pole positions in 2015 with his third in a row at the Chinese Grand Prix.

But team mate Nico Rosberg came close to taking it away – his best effort was less than five-hundredths of a second off Hamilton’s pole time.

Sebastian Vettel again provided the closest challenge to the flying Mercedes but had to settle for third place, nine-tenths of a second behind.

With the soft tyres offering a performance gain of around 1.7 seconds over the medium compound, only Mercedes were able to make it through Q1 without using the softer rubber.

Hamilton and Rosberg were decisively the quickest of the medium-tyre runners, and once their rivals had used the soft tyres the Mercedes pair were still as high as fifth and eighth. The Ferrari pair, Valtteri Bottas and Romain Grosjean led the times after their soft tyre runs.

Despite hurried repairs to his car after final practice, in which he suffered an engine problem, Fernando Alonso made it onto the track at the start of the session. However both he and team mate Jenson Button failed to make the cut for Q2, the pair separated by four-thousandths of a second.

They were comfortably clear of the two Manors – both of which were well inside the 107% time – and joined in an early exit by the Force India of Nico Hulkenberg.

Despite Mercedes being unable to see the telemetry from his car, and suffering a recurrence of the overheating seat problem which plagued him during practice, Hamilton posted a 1’36.423 early in Q2 to head the times from Rosberg, who was three-tenths of a second slower. The Ferrari drivers were next, Vettel a little over half a second slower than Hamilton.

However Daniil Kvyat abandoned his first run after reporting a loss of power in his Red Bull. Kvyat made it back onto the track for a final run, but missed out on a place in Q3 by less than a tenth of a second. The margin was even finer for Pastor Maldonado, whose session came to an end for the sake of just seven thousandths of a second.

Sergio Perez also did a single run in Q2, which he began less than a minute before the chequered flag came out. He ended up slowest of the Q2 runners and will therefore start on the same row as his team mate.

Neither Toro Rosso driver made the cut for the top ten, both losing time on different parts of the Shanghai track. “Not a good lap,” Carlos Sainz Jnr reflected, while Max Verstappen owned up to locking his brakes at turn six.

In a repeat of what happened last time in Malaysia, Hamilton’s first run proved good enough for pole position – but one of his rivals came very close to snatching it away from him.

This time it was Rosberg, who ended a lap which had not looked promising at first with a flying final sector which left him just four hundredths of a second off his team mate. “Oh come on guys!” he exclaimed when told how close he had come to pipping Hamilton.

The Ferrari drivers used old tyres for their first run which left them around two seconds off the Mercedes. Nonetheless Vettel managed to split the two Williams drivers, Bottas having had a messy first lap including a costly slide at the exit of turn 12.

His second effort was cleaner, but for the third time in a row he was beaten by Massa, who produced what he called a “great lap”. Raikkonen was mystified by his car’s handling in the first sector and qualified behind both the FW37s while Vettel beat the pair of them to claim third.