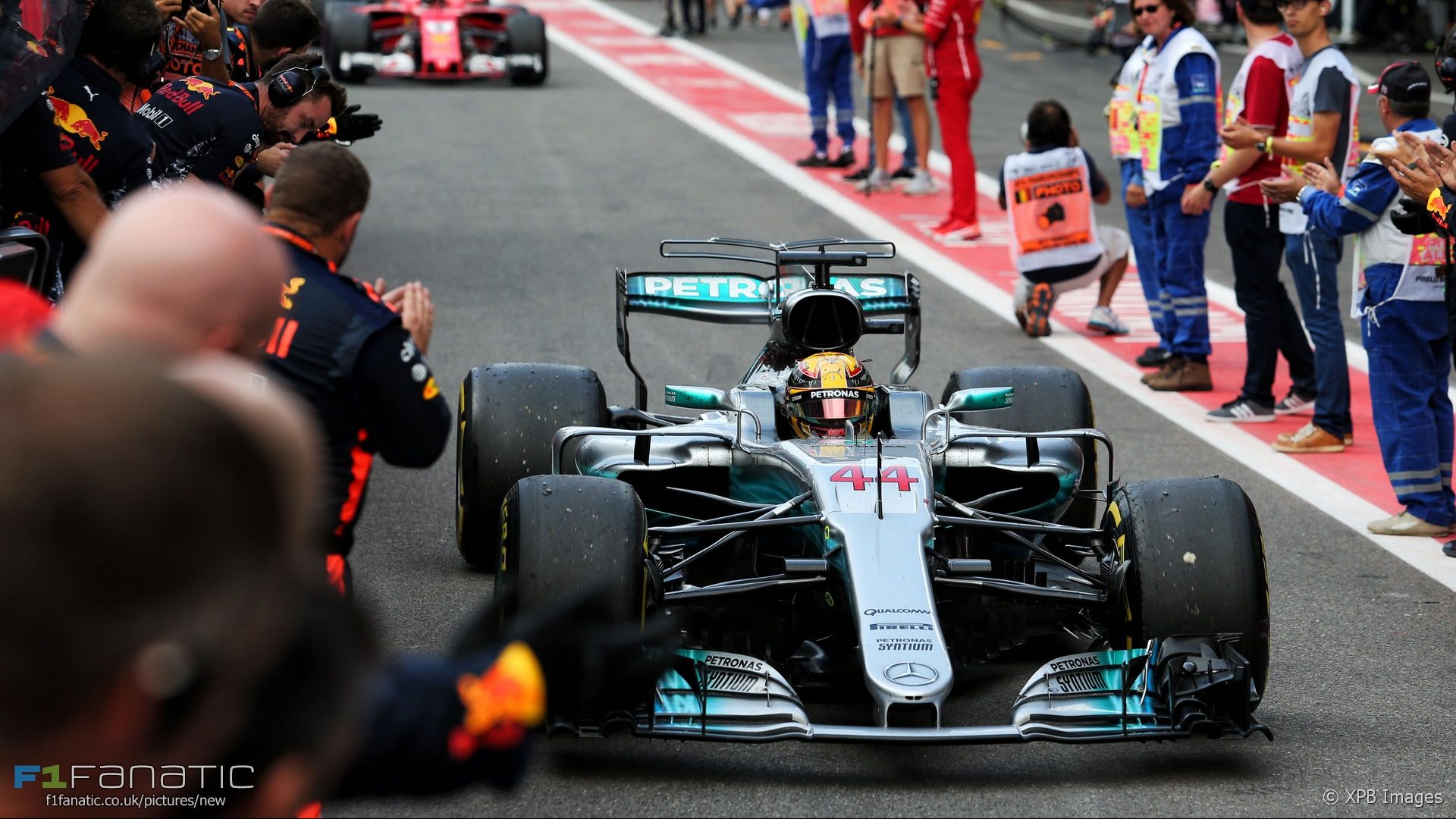 Mercedes found themselves under greater pressure from Ferrari at Spa than many expected them to be. But Lewis Hamilton dealt with it coolly, taking a record-equalling 68th career pole position in style while his team mate missed out on the front row.

Hamilton had Sebastian Vettel on his tail for much of the race and came under threat when a late Safety Car period allowed Ferrari to play their tactical trump card: A fresh set of ultra-soft tyres. However the Mercedes driver managed the restart perfectly and later revealed he eased the throttle approaching Eau Rouge to spoil Vettel’s best chance to overtake him. It worked beautifully, and from there on he resisted the pressure for his fifth win of the season.

Poor Max Verstappen. This could easily have been him, as he was in an even stronger position before another cruel early retirement. He’d pipped Daniel Ricciardo in qualifying too.

However it detracts little from another fine drive by Ricciardo, whose persistence allowed him to bring his Red Bull home in front of a Ferrari and a Mercedes. His opportunistic move on Valtteri Bottas at the restart was a highlight.

The Haas didn’t look quick enough to reach Q3 this time but Romain Grosjean very nearly put it there – he caught traffic at the end of his qualifying run.

In the race he kept his head as he battled with the Force Indias and eventually capitalised for a strong seventh place. Having been 12th at the end of lap one, this was decent progress.

Both Force India drivers had some explaining to do after Spa. Sergio Perez took responsibility for squeezing Esteban Ocon into the wall at the start at high speed, but he protested innocence over the later incident which spoiled both their races.

Realistically both were partly to blame, and as in Baku the fact they are team mates made it worse. In Perez’s case it cost him and the team points.

At the time of the second collision Ocon was aggrieved that a strategy call had dropped him behind Perez. After that he seemed impatient to make a move stick – it’s hard to imagine his run at Perez coming out of La Source was going to work.

That said it wasn’t unreasonable of Ocon to expect Perez wouldn’t squeeze his team mate to the extent that contact was made.

Fernando Alonso gave it everything he had – up to a point. He benefitted from his team mate’s two to qualify well, though his power unit couldn’t cope with him tackling Pouhon without lifting. At the start he briefly held an improbably seventh.

Then, inevitably, the Honda’s lack of grunt dropped him back swiftly. After a series of terse exchanges on the radio it seems he parked a car which might have continued. However justifiable his frustration, giving up is not the mark of a sportsman.

Kimi Raikkonen was going great guns during practice and was on course for a front row start after his first qualifying effort, only to fluff his second run and end up fourth. In the race his car had just come good when he collected a stop-go penalty for failing to slow for yellow flags – a rare but costly lapse. He made amends by taking fourth off Valtteri Bottas, who was never on Hamilton’s pace at Spa. The other Ferrari driver was obliged to settle for second place, though a win might have been possible.

It might have been a great weekend for Jolyon Palmer, who showed a new lease of life in the Renault until suffered a clutch problem in Q3. That plus a gearbox change penalty left him mired in the midfield from where he struggled to emerge. Nico Hulkenebrg did his usual solid job to take sixth.

After a silly crash which ruined his Friday and an elimination in Q1, Felipe Massa recovered to take a respectable eighth. Lance Stroll made little impression. Daniil Kvyat was hampered by technical problems in the build-up to the race given which 12th wasn’t a bad result, though again his team mate managed to nick a point.

Marcus Ericsson out-qualified his team mate but points weren’t on offer for Sauber. Pascal Wehrlein didn’t even make it beyond lap two due to a suspension problem, while Stoffel Vandoorne persevered with his McLaren.