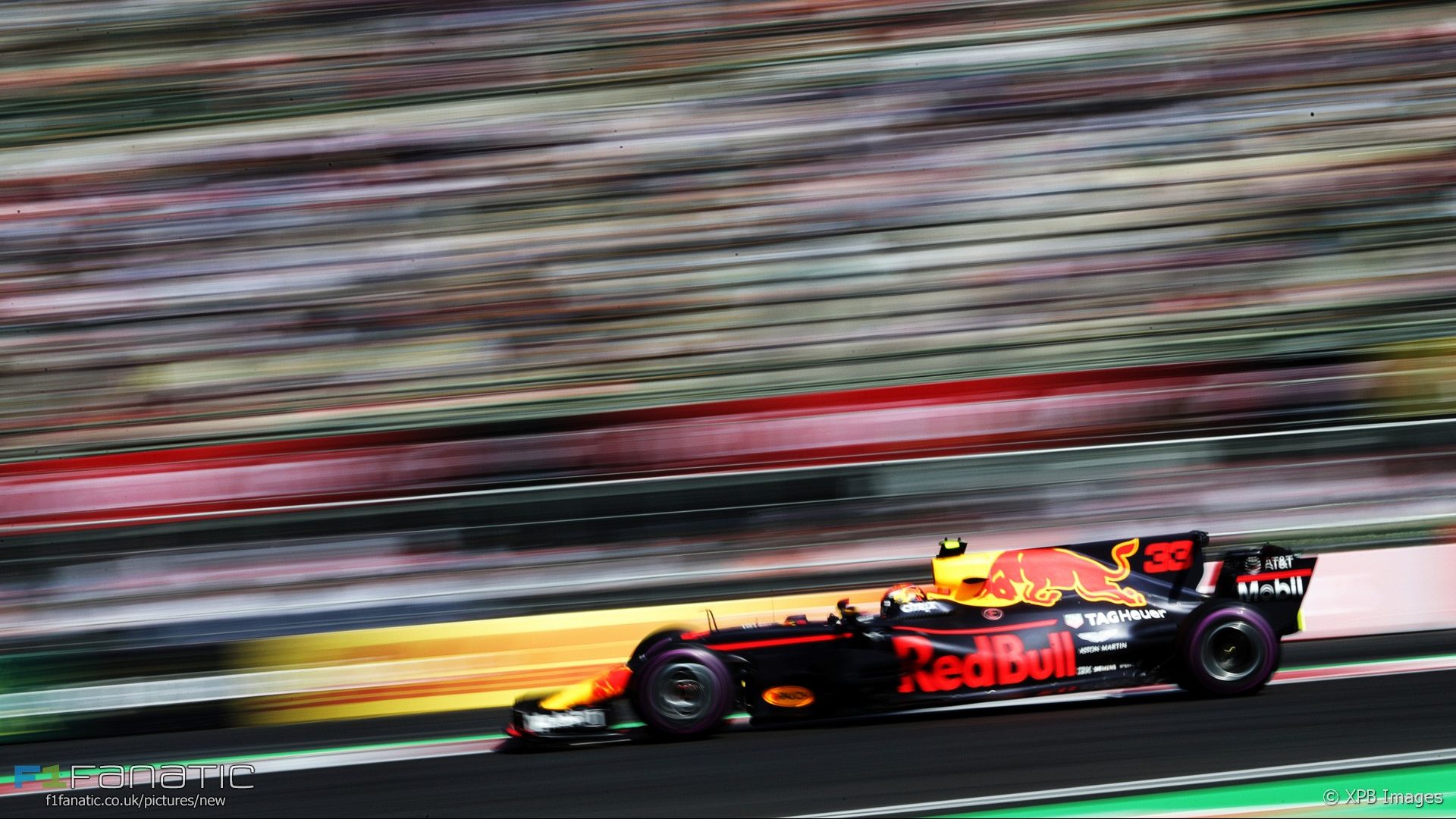 Max Verstappen’s team told him an energy deployment error account for some, but not all, of the reason why Sebastian Vettel beat him to pole position.

Here’s the best of the team radio messages from qualifying and final practice for the Mexican Grand Prix.

Despite never having driven the Autodromo Hermanos Rodriguez before Pierre Gasly had to sit out first practice while Sean Gelael had a run in his car. When he got in the car a technical problem limited him to ten laps in second practice, and another failure halted his running after two laps on Saturday.

Gasly: “Engine problem, engine problem.”
“Stand by Pierre, stand by. Stop in a safe place. Can you describe what happened?”
Gasly: “I just lost power just before turn 12 and after I lose just completely the power.”
OK stay there I will keep you posted.”
Gasly: “Felt like a gearbox problem.”
“We are on it. We are still investigating. We are investigating if an MGU-K start we can go back. OK MGU-K start. You are in first gear and bring the car home. You have to go to P1 then back to P0. All the times wait for five seconds. Then go back to P1 after five seconds go to P2 and then you can start the engine, pull in the clutch, hold the brakes and overtake button.”
“OK Pierre, does it work?”
Gasly: “It still does not work.”
“Understood. Fail alpha 11 fail and repeat the procedure.”
Gasly: “Repeat please.”
“Fail alpha 11 fail
Gasly: “Doesn’t work guys.”
“OK so P1, P0 and jump out. Sorry for that mate.”

Raikkonen: “Why didn’t we do a prep lap?”
“As we mentioned, for temperatures Kimi. We reckon the first lap we’ll be ready this morning.”

To Verstappen: “At the moment track pace looks similar to P2.”

Verstappen: “Tyres are too cold in the front. I need to warm them up.”
“OK keep working on the front tyre.”

Verstappen: “I don’t know what’s going on.”
“What was the problem? Vandoorne.”
Verstappen: “The tyres they don’t work.”
“Vandoorne behind.”

“We have enough time on fuel to do one more. Happy to?”
Hartley: “I’m happy to. Wouldn’t mind seeing a bit of data before the next run.”

Verstappen: “Ah the hairpin.”
“Yeah that was not a green sector by a tenth and a half.”

Hamilton: “Still having problems.”
“We see it. Will require a calibration change.”

“Middle sector still strongest. Down three-tenths off in sector one, two in sector three”
Hamilton: “Three in sector one?”
“Affirm.”

“Charge on. Sorry for Kimi. He should have let you by. He was on an out-lap.”
Hartley: “Yep not cool.”

“Sainz: “Yeah too much traffic guys. I think you’ve sent me in the worst possible place.”

Grosjean: “What is Perez doing? He’s almost stopped on track.”
“No idea. He’s on a back-off.”
Grosjean: “He cannot back off that much.”

Grosjean: “OK box.”
“Please stay out and just get that CSL number.”

McLaren had their drivers give each other a tow.

“Fernando we need to swap positions with Stoffel now so we need to back up towards him.”
Alonso: “Distance to Stoffel?”
“Stoffel approaching turn one, Massa turn two, turn three. Let Massa through now. Stoffel now the car behind plus three. Let Stoffel past, we’ll open the lap behind him, Stoffel will let you past.”

Perez: “Hello everyone. Thanks so much for this year supporting me.”

Hamilton: “Some sort of cut on the main straight there.”
“OK copy. So…”
Hamilton: “I just had another cut.”
“Roger.”

Alonso: “I have no power. Like no turbo.”
“OK Fernando keep going for the moment.”
“OK we think that has reconered.”

“OK we didn’t make it through. Sorry man.”
Grosjean: “Yeah again out-lap was a problem.”
“Yeah Massa. I should’ve sent you sooner. Sorry.”

Gasly hadn’t run in the first session and his team mate’s car failed during the second.

Verstappen: “We need to change something if we want to do one timed lap because this doesn’t work at all.”

Max Verstappen was quickest in Q2 but he was pipped to pole by Sebastian Vettel. Verstappen also found himself under investigation after delaying Bottas. The Mercedes driver aborted his first qualifying effort after passing the Red Bull and locking up, which left him with extra fuel for his final tun.

Verstappen: “I lost a lot of time on the straight.”
“Maybe a bit of wind influence there Max.”

“Sadly Sebastian pipped you for P1. But you are P2. So well done for that.”
Verstappen: “Agh. Ah my god. Tyres don’t work. Unbelievable.”
“To be fair we did lose around six or seven hundredths due to an incorrect energy deployment but that wasn’t all of it, you were nine-hundredths behind Seb. So it wasn’t quite there. Hard luck.”

“So that’s P4, Valtteri. The fuel that you carried put you equal with Lewis who was P3, good job.”
“OK guys. Shame there wasn’t a positive today, but tomorrow.”

“Ricciardo: “Couldn’t do anything else.”
“Yeah understood mate it did look tricky. We’ll have a good look at it afterwards.”

“Well done that was a cracking lap.”
Hulkenberg: “Woohoo.”
“OK Nico you are P8.”