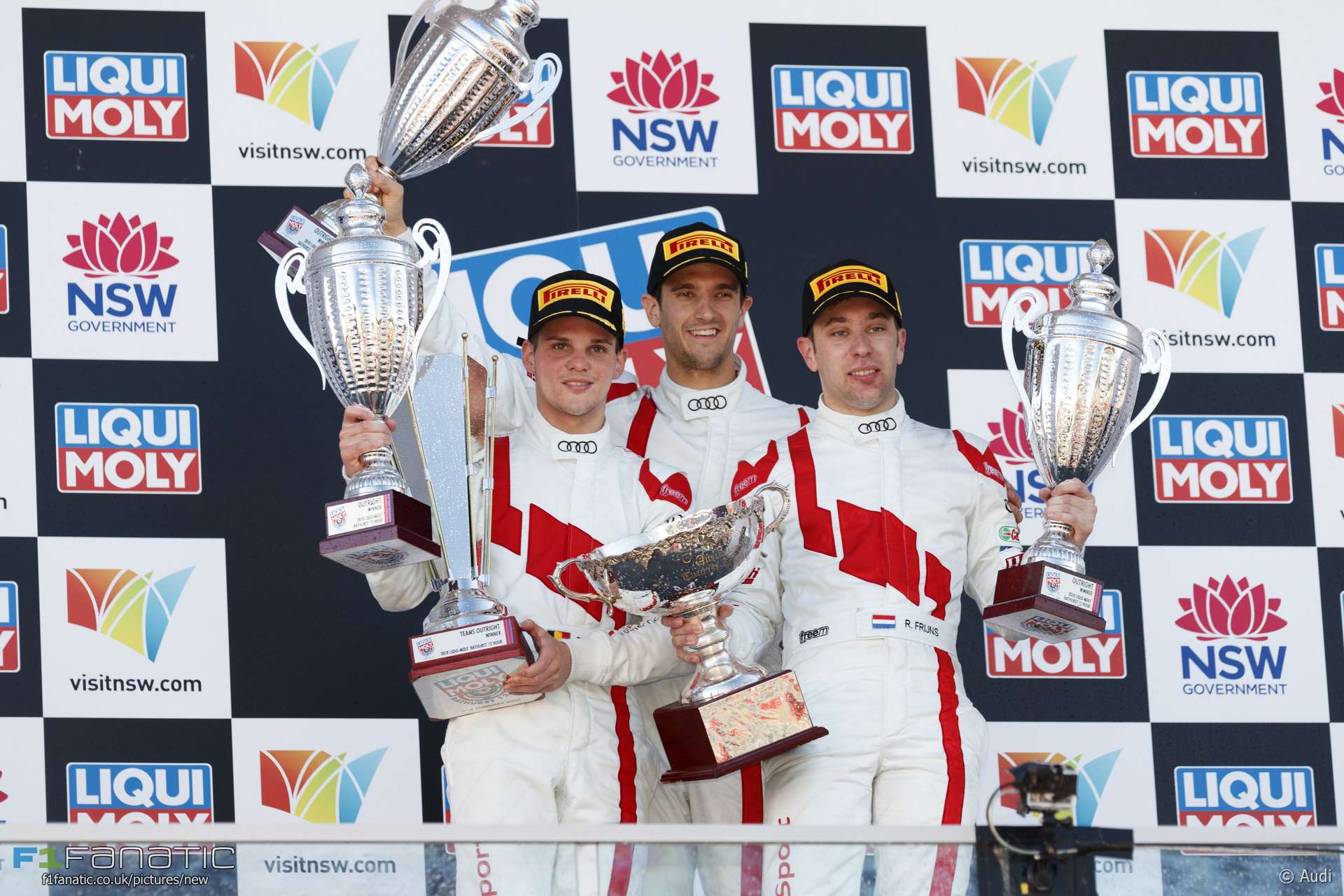 Catch up on the weekend’s motorsport highlights including the huge crash which brought the Bathurst 12 hours to an early end, a thrilling Formula E race and more.

Audi tasted victory at the Mount Panorama circuit but a series of crashes including one which caused the race to be red-flagged provided the biggest talking point of the race. Ash Walsh spun his Audi R8 into a barrier and was struck at high speed by John Martin’s Mercedes. With just a few minutes left to run the race was stopped but race organisers later confirmed the drivers were “okay”.

The cars were brought to a stop at the start/finish area where Robin Frijns, Stuart Leonard and Dries Vanthoor celebrated a win which came about after another Audi, in the hands of Markus Winkelhock, Christopher Mies and Christopher Haase, came to a stop while leading. Second place went to the Mercedes of Kenny Habul, Tristan Vautier, Jamie Whincup and Raffaele Marciello while the Porsche 911 of Tim Pappas, Jeroen Bleekemolen, Luca Stolz and Marc Lieb completed the podium.

The race-ending crash was one of several dramas in the race. Audi driver Andrew Bagnall was hospitalised following an earlier crash which also led to the Porsche of Stephen Grove, Brenton Grove and Ben Barker receiving a one-minute penalty after hitting the Medical Car during a Safety Car period.

Five cars ran nose-to-tail in the closing laps of the fourth race of the 2017-18 Formula E season but none were able to find a way past each other around the Santiago course. Jean-Eric Vergne and Andre Lotterer finished a one-two for Techeetah despite making contact as they disputed the lead. This would have caused consternation on the pit wall but a technical fault meant none of the teams were able to follow the actions on their screens.

Vergne’s win puts him on top in the drivers’ championship and also made Techeetah the first team to score a one-two finish, something which hadn’t happened in the 36 races since Formula E began in 2014. Sebastien Buemi took third ahead of former points leaders Felix Rosenqvist and Sam Bird, the top five covered by 4.4 seconds.

Felipe Drugovich had to wait almost two months to put a lock on the MRF Challenge title but did so in the final round at Madras.

Rinus Van Kalmthout won the opener and race two went to Presley Martono after first-time pole sitter Aleks Karkosik spun out on lap one – the furious Polish driver thumped the ground with his fists after retiring. The final two rounds went to Drugovich, who will race in Euroformula Open with RP Motorsport this year.

David Coulthard won the Race of Champions though no current F1 drivers entered this year’s race.

Consistency continues to keep Marcus Armstrong at the top of the Toyota Racing Series points table. Despite not having won any of the last nine races, and seeing his podium streak some to an end at Taupo last weekend, the 17-year-old remains 33 points ahead of fellow Ferrari development driver Robert Shwarzman ahead of the championship’s final weekend.

Shwarzman won the final encounter at Taupo while Juan Manuel Correa and Brandon Leitch grabbed the other two wins. A trio of third places for Richard Verschoor keeps him in with a chance of taking the title at the final triple-header at Manfeild next weekend.

The Formula Four UAE championship returned to Yas Marina where David Schumacher won twice and the other wins were shared by Charlie Weerts and Caio Collet.