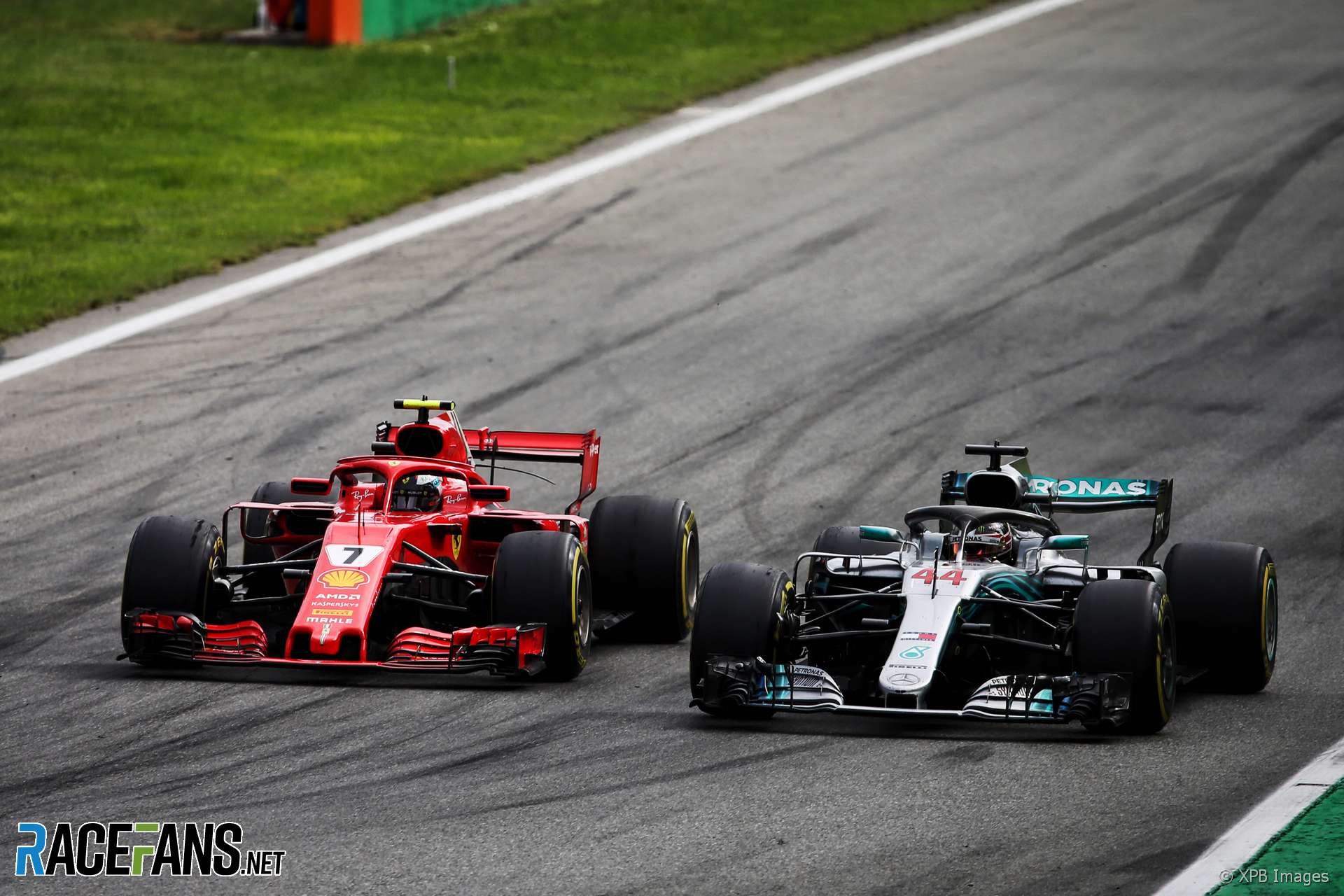 Sebastian Vettel went into Ferrari’s home race in good shape. He’d returned from the summer break by winning in Belgium and was poised to hack more points out of Lewis Hamilton’s championship lead.

But his good work at Spa was undone within moments of the Italian Grand Prix beginning. That paved the way for Mercedes to wrench victory from Ferrari’s hands, to the crushing disappointment of the home crowd.

It’s been 18 years since Monza reshaped its first corner into a single, brutally tight chicane. For the first time since then, both Ferrari drives had a clear view of it from the grid.

The charge to the Rettifilio chicane is long and narrow, presenting ample opportunity for Ferrari to choreograph how they would keep their rivals behind and potentially manoeuvre Vettel, second in the points and on the grid, into the lead. But either there was no plan or it wasn’t heeded.

Vettel kept his counsel over precisely why his failure to claim pole position rankled so obviously, as his clipped “speak later” on the radio after qualifying showed. But if Ferrari got something wrong on Saturday, Vettel’s error on Sunday was far more costly.

Vettel came out of the Curva Grande in Raikkonen’s slipstream but Hamilton was closer to his target and he moved first, darting to the outside. But as they approached terminal velocity the Mercedes couldn’t draw alongside. Vettel, however, moved to the inside, where he was blocked by his team mate.

“I wanted to get down the inside,” Vettel explained. “I think I had the space but again Kimi opened the brakes which is absolutely fine for him to do. I could’ve done the same but then the apex is coming very rapidly and I think it would’ve been a nasty one. So I tried to get out of there.”

But with Hamilton on his outside Vettel had nowhere to go. Surprisingly, when contact was made it wasn’t the driver on the outside – Hamilton – who spun, but Vettel. Although Vettel had sight of Hamilton’s car and was better-placed to anticipate the contact, his wheels were still pointing left when they touched; Hamilton seemed at the very least braced for impact and had plenty of room to gather up his car and make the apex for the second part of the corner.

Vettel accused Hamilton of not leaving him enough space. But the Mercedes driver was under no obligation to, and Vettel had plenty of room on his left when they touched, so the stewards correctly ruled it a racing incident.

Hamilton had scored a quick win over one Ferrari. But it would take most of the rest of the race and the combined efforts of the Mercedes team to dislodge the other.

The luckless Brendon Hartley didn’t make it as far as the first chicane when he was pincered between Stoffel Vandoorne and Marcus Ericsson, destroying his front-right suspension. The Safety Car was summoned and Hamilton limbered up for a pop at race leader Raikkonen.

Raikkonen went early, flooring the throttle at the exit of Ascari. This was a risky move – the Safety Car only just made it back to the pits before the Ferrari hammered past, Hamilton’s Mercedes poised to strike, Max Verstappen’s outgunned Red Bull slipping back.

They crossed the start line and Hamilton popped out from Raikkonen’s rear wing to the outside, squeezing the Ferrari and occupying the middle of the track to dissuade a counter-attack. But Raikkonen wasn’t done for. A clean exit from the Rettifilio set him up for a run on the outside at the Della Roggia. Hamilton, not wanting to repeat Vettel’s misjudgement, let him go and lived to fight on.

But the straight-line speed advantage Ferrari enjoyed over Mercedes at Spa seemed little in evidence at Monza. Raikkonen couldn’t pull away – Hamilton consistently matched his lap times. Further back, Valtteri Bottas found he was unable to displace Verstappen from third. And with Vettel beginning a recovery drive from the back, there was still everything to play for at Mercedes.

On lap 20 the Mercedes and Ferrari mechanics appeared in the pits. Raikkonen headed for the pit lane and Hamilton didn’t follow him – to do so would be a clear strategic error. Instead he pressed on, hoping to wring enough performance from his tyres to gain a few seconds on the Ferrari, or even benefit from another Safety Car deployment.

It looked like he might get one when Daniel Ricciardo’s Red Bull came to a smoky stop on lap 24. But race control elected against summoning the Safety Car, and by now Raikkonen was lapping more than quickly enough that Hamilton’s chance of ‘overcutting’ him to take the lead was gone. Four laps later he was in for fresh tyres, the late pit stop having cost him five seconds to the net leader.

Raikkonen hadn’t regained the lead yet because the other Mercedes had moved ahead. This was clearly a tactical ploy by Mercedes to hinder Raikkonen, it worked: Hamilton closed back up to the Ferrari and, though he couldn’t immediately pass, it meant Raikkonen was forced to run in the dirty air of his fellow Finn’s car for several laps. He’d already pushed his tyres hard immediately after his pit stop – when they are most in need of saving – and soon he would be in real trouble.

Bottas finally pitted on lap 36 and the seven laps Raikkonen spent behind him had taken a further toll on his tyres. Hamilton followed him closely, and race engineer Peter Bonnington urged him to play the waiting game. “This race will be won and lost with tyres,” he said. “It looks like Raikkonen’s killing his tyres. Don’t you do the same.”

Raikkonen sensed the inevitable. “There’s no way to save tyres if you want to keep ahead,” he warned the pit wall.

Inexorably, Hamilton chipped away tenth by tenth on each lap. Finally by lap 45 the Ferrari was on the ropes. Raikkonen ducked and feinted as far as the rules allow, trying to deprive Hamilton of a tow on the straight. But it was to no avail – the Mercedes lined him up on the outside of the Rettifilio, got to the corner first and took the place cleanly. This time there was nothing left in Raikkonen’s tyres for him to retaliate with. Tifosi hearts sank.

Hamilton created his rival afterwards. “He moved to the right and then I thought a little bit too the left but it didn’t cause me any problems and then it was just about late braking into turn one. It was very, very close. Kimi was very, very fair. Gave me space. It was tooth-and-nail, whatever you call it, as racing should be.”

Raikkonen lost as much as 1.5 seconds per lap on the run to the chequered flag. “I have massive vibrations,” he warned. “Nothing that I can do.” Luckily for him Mercedes’s strategy of using Bottas as Hamilton’s wingman again meant he was stuck behind Verstappen. Earlier on the Red Bull driver had got away with cutting the Rettifilio chicane while resisting Bottas, but his swerve into the side of the Mercedes approaching turn one was a clear violation, and earned a five-second penalty. This paid off doubly for Ferrari, as Bottas remained contained behind Verstappen, while Vettel inherited another place without having to pass the Red Bull.

Nonetheless it left Ferrari counting the cost of a wasted opportunity to take points of Hamilton, and a squandered chance to take their first home win at eight years despite having swept the front row of the grid.

Vettel fell to 18th after bouncing off Hamilton and restarted immediately behind Ricciardo. The Red Bull driver had started at the back due to reliability problems earlier in the season and failed to see the chequered flag due to yet another failure, though not before Vettel swept past in another display of Ferrari power.

Another driver making who made gains through the midfield was Sergio Perez, who ultimately finished behind team mate Esteban Ocon. This meant another best-of-the-rest one-two for the team formerly and still known as Force India.

The pink cars were promoted to sixth and seventh in the final classification after Renault successfully protested against Romain Grosjean’s Haas, whose floor dimensions were found not to conform to the rule book. During the weekend Force India said they have designs on fifth place in the championship, which at their rate of scoring since the summer break isn’t beyond the realm of possibility.

Renault’s Carlos Sainz Jnr therefore moved up to eighth and Renault stayed ahead of Haas in the constructors’ championship. The Williams pair rounded off the top 10, Grosjean’s disqualification handing Sergey Sirotkin his first world championship point.

Charles Leclerc endured a poor weekend at a track where Sauber looked potentially strong. McLaren ran true to their recent form: Vandoorne limped in 12th, Fernando Alonso retired. And there was no reward for Pierre Gasly after he heroically dragged his Toro Rosso-Honda into Q3: out-gunned on the straights, he slumped to 14th behind Nico Hulkenberg’s Renault.

Hamilton’s victory was his fifth in the last seven years at Monza and the crowd made it quite clear they have had enough of watching him, Mercedes, or anything which is painted red winning Italy’s round of the world championship.

Since the blows of the Red Bull Ring and Silverstone, Hamilton has rallied magnificently, taking three wins and a second, and pulling 30 points ahead of Vettel. But it took everything he and Mercedes had to win this one: the strategy was faultless, his racecraft peerless, and in Bottas he had a willing wingman – one who might not have been in the right place at the right time had he not spent the early stages stuck behind Verstappen.

The championship now heads to Singapore – previously one of Mercedes’ weakest circuits. Will the track where it all started to go wrong for Ferrari last year give Vettel the chance to recover his lost points?