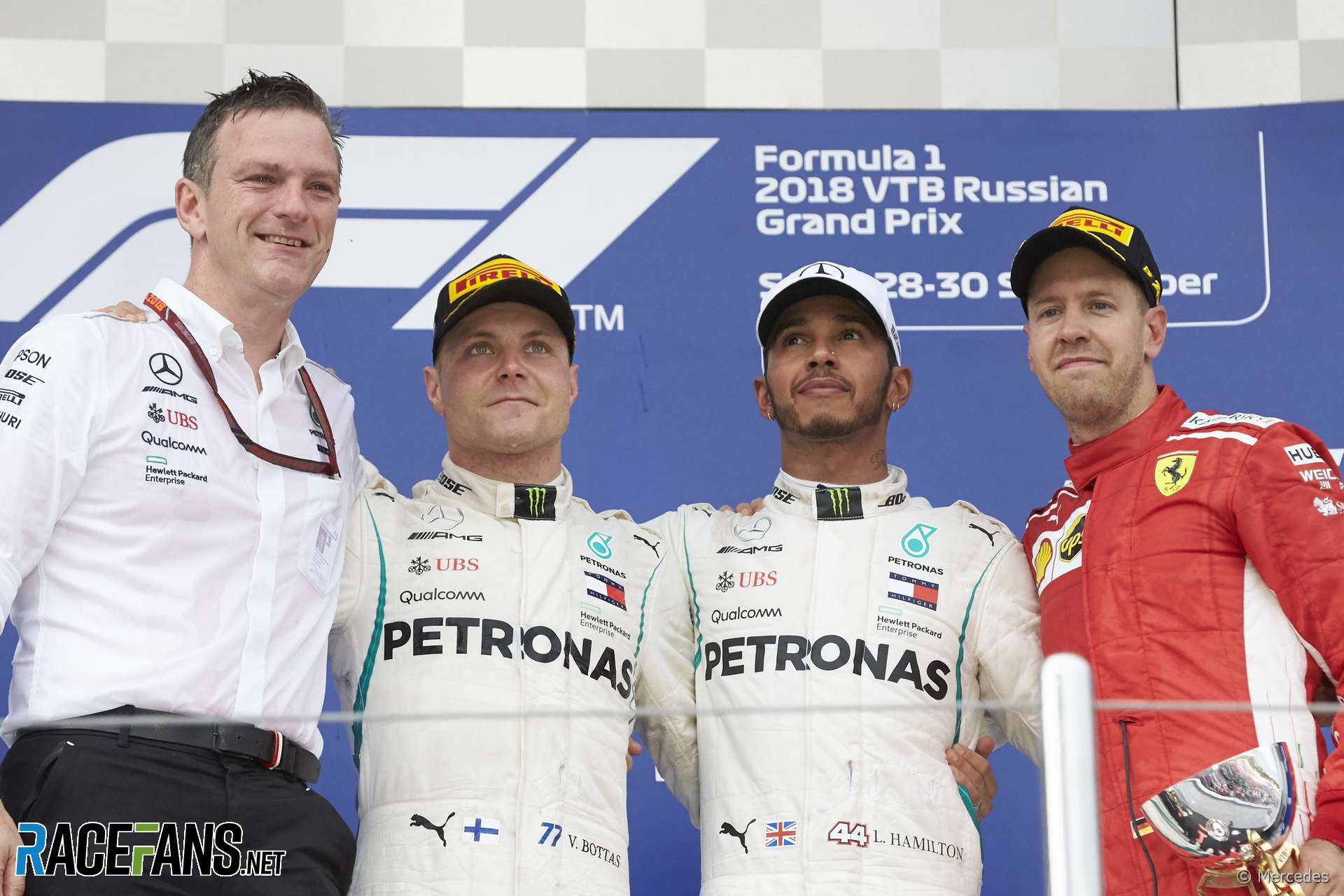 On the approach to turn two at the Sochi Autodrom, drivers pass within about 250 metres of a restaurant called La Punto. There for 300 roubles you can buy a cocktail of tequila, sambuca and tabasco sauce which they call ‘Sample B’.

The name is a reference to the site’s former purpose: It was the home of Russia’s state-run doping programme, where urine ‘B samples’ from athletes were switched so drugs cheats could compete undetected.

So in the grand scheme of things, far worse crimes against sport have been committed in Sochi than when Valtteri Bottas waved Lewis Hamilton by on the 24th lap of Sunday’s Formula 1 race so he could win. Not that you’d know it from the borderline hysterical reaction on social media.

From the moment the five red lights vanished Mercedes gave Ferrari a lesson in team tactics, including those of the less-than-savoury kind. At Monza, Ferrari locked out the front row of the grid but Hamilton got in among them, muscled his way past Sebastian Vettel, and was on his way to a stunning victory.

Mercedes swept the front row in Sochi but they weren’t about to let the Ferraris steal their advantage. Vettel, third on the grid, got away fractionally better than the two silver cars ahead of him. But the W09s held formation into and through the first braking zone. Vettel’s best chance of separating them was gone.

“I had nobody who was giving me any tow,” he reflected. “I think it was clear Mercedes did a good job, Valtteri moved immediate to give Lewis a good tow. I had the best start out of those three but couldn’t go anywhere.”

So Bottas led Hamilton, Vettel and Kimi Raikkonen through the first corners. Behind them Kevin Magnussen temporarily led the midfielders while Charles Leclerc displaced Esteban Ocon for sixth. However those two positions were destined for the Red Bull pair, notwithstanding the fact they had lined up 18th and 19th.

Leclerc took over fifth place as the second lap began with an inspired move on the outside of Magnussen at the long turn three. Ocon was poised to follow him through but Magnussen cut across sharply, the pair banging wheels, and the Force India driver fell in behind him for what proved a long afternoon.

Hamilton loses out in the pits

Bottas came into the weekend 110 points behind Hamilton so it was inevitable the team were going to have a pre-race talk about how to maximise Hamilton’s championship chances. “We are not in a part of the season where I would particularly enjoy the Mercedes racing each other at the front,” said team principal Toto Wolff before the race.

But with Vettel looming in Hamilton’s mirrors during the first stint, Mercedes chose to preserve the lead of the race to begin with. Bottas headed for the pits at the end of lap 11, discarding his ultra-softs for a set of softs which would see him to the end, and ensure he wasn’t going to be ‘jumped’ through the pit stops.

The logical next move was to bring Hamilton in immediately. As he had track position over Vettel, who had stayed out, heading for the pits would snooker his rival. But Hamilton stayed out – Wolff later said his way his error, as he’d been too busy talking to strategist James Vowles for the call to be made in time.

Instead, Vettel made for the pits, no doubt unable to believe his luck that Mercedes had fumbled such a straightforward call. Now he had the opportunity to use the performance of his fresh tyres to gain on Hamilton.

Fernando Alonso inadvertently aided Vettel’s cause. The McLaren driver was the only one to save two sets of soft tyres for the race and hoped to use them to provoke his rivals into pitting too soon and getting caught out by tyre degradation. He came in on lap five, which prompted a response from Williams.

Sergey Sirotkin dropped to last after his pit stop and began to hove into Hamilton’s view. The disturbed air from the Williams cost him precious tenths. Vettel cut nearly a full second out of him in the middle sector.

Hamilton headed for the pit lane. Ferrari, taking their cue from Mercedes’ tactics at Monza and other races, sent their pit crew out to deny Hamilton a clean run into and out of his box. (They covered themselves by telling Raikkonen to “do the opposite to Hamilton” as he approached the pit entrance. “But I can’t even see him”, he pointed out.)

It all added up as Ferrari hoped. Vettel swept around the outside of the Mercedes as Hamilton rejoined the track. But in little more than a lap he threw away that vital advantage.

Vettel locked up into turn 13 and Hamilton stalked him as the 19th lap began. A month ago at Spa Hamilton had been unable to resist Vettel’s Ferrari-powered charge along the Kemmel straight, but now the Mercedes seemed to have more than enough power to attack the Ferrari.

Hamilton dived for the inside at turn two but Vettel, leaving it desperately late, covered him off. Hamilton came back at him at the exit of turn three and sailed easily down the inside at turn four. It was as if Vettel had lost appetite for the fight, a view his subsequent comments also hinted at.

“It was very difficult to see where he was,” Vettel explained. “I couldn’t see him for a very, very long time and then just saw his tyres and I knew that he was then somewhere there.

“I didn’t want to be a complete arse by pushing him into the dirt and potentially into the wall so I wasn’t quite sure where he was and then at some point I had to give in.

“I thought I could maybe get it back out of turn four but I had to give him the entrance otherwise, you know, at some stage it just becomes silly.”

It’s hard to imagine someone like Verstappen taking that view. Or, on the strength of his Sochi drive, Vettel’s future team mate Leclerc.

Perhaps Vettel feared the stewards would take a dim view of his defending at turn one. And he had some cause to, as race director Charlie Whiting was concerned by what he saw, and mentioned it to the stewards before Hamilton got on the radio to complain about it.

“I thought that needed to be looked at,” said Whiting. However the stewards were satisfied Vettel had kept it clean. “How I see it doesn’t really matter, it’s how the stewards see it,” Whiting pointed out.

“They felt that in all reality it didn’t constitute two changes of direction which is what the regulations require for a penalty,” he said, adding “I think they took a slightly lenient view on that.”

However Hamilton’s move had over-stressed his one-and-a-bit-lap-old tyres. A small blister was beginning to develop. Mercedes sensed a long-term threat to his position, and moved to protect their championship leader.

“You need to let Lewis by into turn 13 this lap,” came the order which Bottas immediately followed. Afterwards he questioned the instruction, and Vowles came on the radio: “We had a risk with Lewis against Vettel he has a small blister,” he explained. “I had to do this to make sure we secure this. I understand.” This was the explanation Mercedes stuck to after the race.

While all this was going on, Verstappen had risen through the midfield so quickly that the leaders’ pit stops had dropped them behind the soft-tyre-shod Red Bull. Daniel Ricciardo, having damaged his front wing on the first lap (which gave Pierre Gasly a nasty fright), did not get through the field as quickly.

Red Bull left Verstappen out, hoping a Safety Car period would give them the chance to make a quick pit stop and go after the leaders. At one point Hamilton drew within range then dropped back quickly, possibly to protect his tired tyre.

When Verstappen eventually pitted, for a set of ultra-softs, he didn’t have the pace to chase down the lead quartet. He therefore settled for the fifth place he predicted 24 hours’ earlier when he was still a 20-year-old.

Leclerc’s lap two heroics secured a well-earned seventh place ahead of Magnussen. Force India orchestrated two positions swaps between Ocon and Sergio Perez in an unsuccessful attempt to displace the Haas – exactly the tactics they spurned in Canada last year which contributed to the breakdown in relations between the two drivers.

A disappointed Romain Grosjean missed out on a points finish despite passing Nico Hulkenberg in the closing laps. This was one of few positions changes not performed by a Red Bull or as a result of team orders at a track which again proved a poor venue for wheel-to-wheel action.

“It’s not very good at all for racing,” the race winner admitted. “You’ve got the really long straight but the characteristics of the circuit mean the first two sectors are quite fast and the last one, the last sector, the rear tyres are so hot, it’s impossible to follow another car, so you can’t even get close to have a run.”

Last year’s Russian Grand Prix had been a joyous one for Bottas as he delivered his maiden F1 win. This time he, Hamilton and Mercedes scored a joyless one-two and spent the rest of the day explaining why Bottas had to surrender what would have been his first victory of the year.

Mercedes’ tactics divided opinion between the usual extremes. The howls of protest on social media contrasted with the view of Mercedes’ most vehement supporter who was, of all people, Vettel. Not for the first time this year, the Ferrari driver rebuked the media for asking Mercedes questions he didn’t approve of.

“I don’t think it’s fair now asking them tough questions because I think what they did and how they played as a team today makes complete sense,” he said. “Obviously it’s a bit dull for the race but it makes sense so it’s not entirely fair to or not nice to ask them those difficult questions.”

Vettel would certainly not have liked RaceFans’ questions to Wolff on Sunday. Given Mercedes told Bottas they only issued the order to protect Hamilton when he was under threat from Vettel, why did they not restore their original running order at the end of the race as they did in Hungary last year? After all Vettel was five seconds behind at the flag, and Mercedes had said they were prepared to let Bottas win the race.

“Two reasons,” Wolff explained. “First of all when you’re early in the season the pressure within the team is not as high as when you’re in the last quarter of the season, it’s a completely different situation.”

“In terms of speaking to them, in Hungary actually what we said to Valtteri was ‘if he can’t pass Raikkonen, we’ll take it back’ and that was all we did. Today the circumstances were completely different.”

That detail seemed to have been lost on Bottas, who in the final laps asked his team on the radio whether they intended to give him his win back. Not this time.

29 comments on “No backsies for Bottas: Hamilton wins on Mercedes team orders”