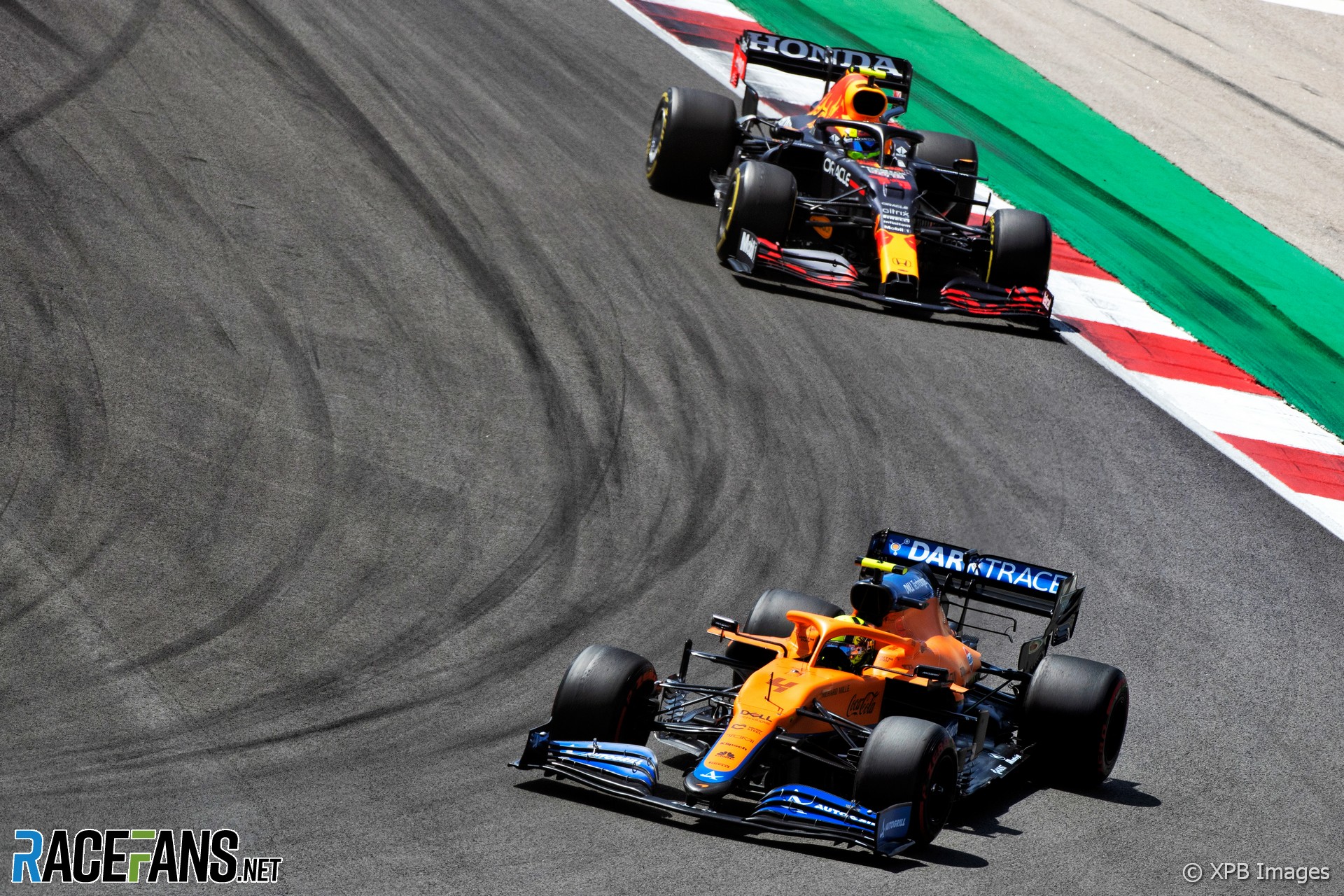 Horner said the stewards’ rulings on drivers going off-track had been “quite expensive for us this weekend”.

He referred to “the pole position yesterday”, which Valtteri Bottas took for Mercedes after Max Verstappen’s quicker lap time earlier in Q3 was deleted for a track limits infringement at turn four.

At the end of today’s race Verstappen had another lap time deleted for straying beyond the track limits at turn 14. That decision cost him the bonus point for fastest lap, which went to Mercedes driver Bottas.

After the race Verstappen described the decision as “odd”. No other driver had a lap time deleted during the race for running wide at that corner.

“But for track limits that we didn’t see anybody else have the penalty that Max did today,” said Horner. “He would have achieved that lap.”

Verstappen was also involved in a row over track limits in the season-opening race in Bahrain, where he had to surrender the lead to Hamilton after overtaking him off-track.

“The whole track limit debate is just frustrating,” said Horner. “I mean, it’s been brutal for us across the first three events. The win in Bahrain, the pole position yesterday and then the fastest lap. So it’s been pretty expensive for us.”

However Masi pointed out that drivers had been consulted about the revised definition of track limits at turn 14, which was announced on Saturday morning. He said Verstappen’s penalty was issued “as per the event notes.”

“Following a review of what happened on Friday in particular, turn 14 was being used far more,” Masi explained. “It wasn’t an issue in 2020 but became one in 2021. So as a result I gave all the drivers the latitude to use the red and white kerb at that corner in a similar manner to turn five.

“However they were told that if they gained a lasting advantage out of each of those – [by] overtaking a car, [being] faster in a mini sector, whatever it may have been – that it will be looked at.”

Verstappen’s line through the corner was a clear violation, said Masi. “Having looked at it post-race, it’s very clear that Max was… off the track [and] that he was faster in that mini-sector than anyone and as a result got the fastest lap of the race, which is a world championship point.”

A total of 18 laps times were deleted during the race for infringements at turns one, four and 14, in addition to others earlier in the weekend.

“So I think that shows that we were policing the track limits for everyone equally. In addition, it was consistent with the manner in which the event notes were portrayed, particularly the additional version three that went out on Saturday morning, and that was following the discussion at the drivers’ meeting about what would and wouldn’t be tolerated.”

Horner also claimed Sergio Perez lost a position early in the race because Lando Norris overtook him while driving off-track. Masi said the stewards examined this incident and concluded the pass was legal.

“That was actually reported by Red Bull during the race and was reviewed and no, Lando did not overtake Sergio at turn four outside of the track. It was a passing manoeuvre under brakes into turn five at the end of a DRS zone.”

Norris said he never doubted the pass was legal. “I thought I was fine,” he said. “I’d have to see from an on board and from the T-cam or something. But no, I went to the inside – if I went off, I would have gone to the outside of him or something.”