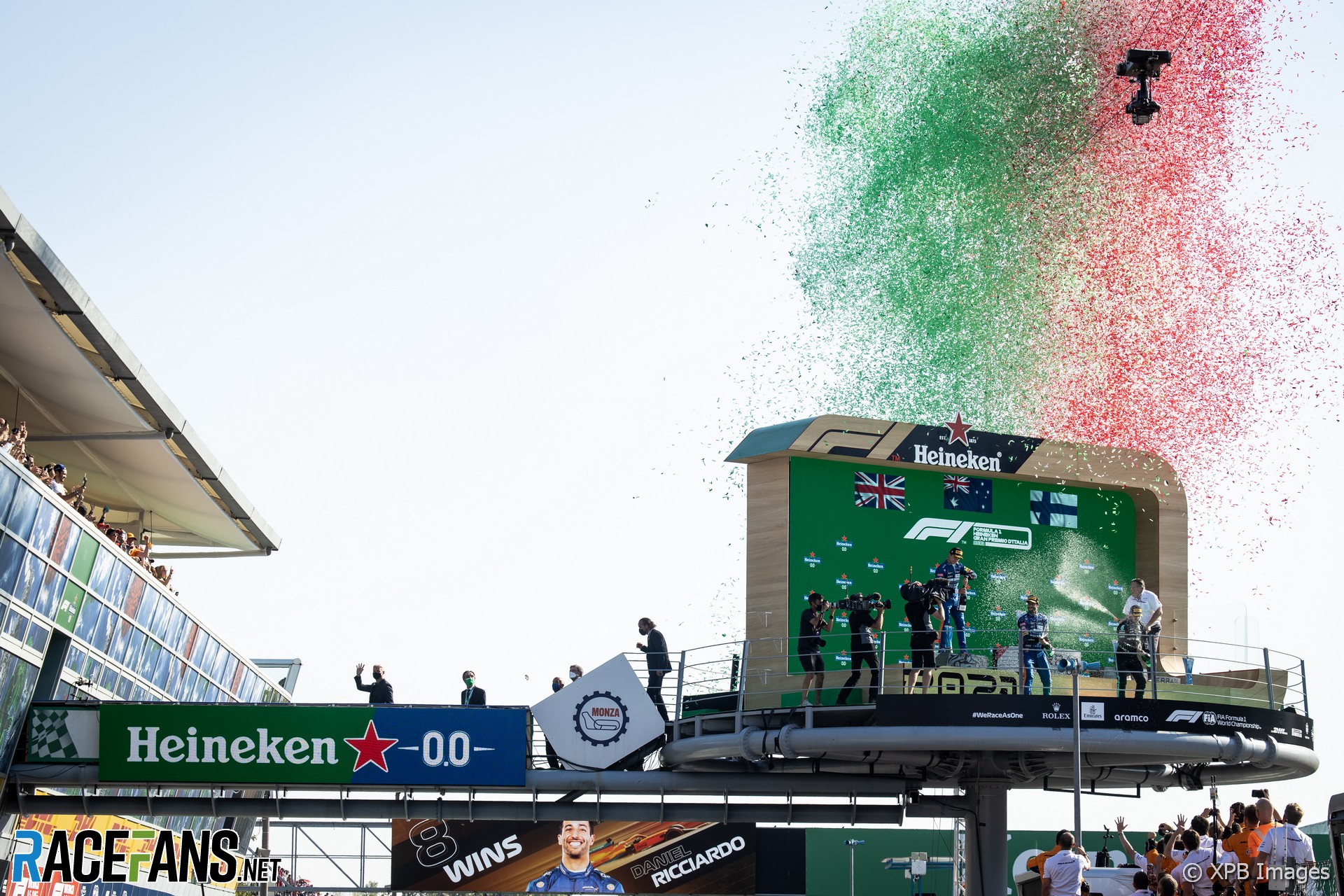 My first Saturday appointment is with Beat Zehnder, sporting director of Sauber, which runs Alfa Romeo’s F1 team. I first met him back in January 2001 when Kimi Raikkonen was announced as the team’s new F1 driver despite having just 23 car races on his CV.

The pair have remained firm friends ever since, and thus Zehnder is the ideal source to tap about Raikkonen, who leaves F1 after this season.

On my way back to the media centre I spot Mark Webber and we chat about the state of the rookie market. The Australian manages Oscar Piastri, the 2019 Formula Renault Eurocup champion and reigning Formula 3 title holder who is also the current Formula 2 points leader. Piastri is unlikely to find a 2022 F1 drive despite “having more super licence points than he knows what to do with, mate”, as Webber puts it. More from both coming here soon. 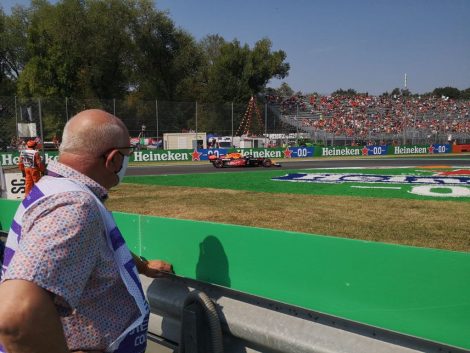 At noon I head out for my now-traditional Saturday morning trackside session and select the first chicane as initial vantage point. Although the complex is taken at (relatively) slow speed it is a highly technical sequence and its fascinating to watch the different approaches. McLaren, Mercedes and Red Bull look good through here, which seems a good omen for Sunday…

Next stop is the Parabolica – now formally renamed after Michele Alboreto – and on my walk towards the paddock I stop shortly before the braking zone for the chicane to listen to the engine sounds at full chat. Intriguingly, even cars fitted with the same engines sound different – Mercedes, McLaren, Aston Martin and Williams have distinctly different sounds despite the same specification engines, ditto Ferrari and its customers.

During my walk the session gets red-flagged due to Carlos Sainz Jnr’s hefty shunt in the middle part of the Ascari chicane. From the big screen footage it appears as though his HANS straps snapped. I later ask him for comment, and he explains that it did not rip, but both the HANS and seat belt straps stretched to the maximum to the extent that he thumped the steering wheel with his chest.

On Sunday Formula 1 race director Michael Masi tells me that they are designed to stretch to absorb body impact, but they will be examined to ascertain whether they went beyond limits.

There’s a long wait to the sprint qualifying race so I seek some news. A team source tells me they had expected a draft 2022 F1 calendar this weekend but that it is now unlikely to be presented before Russia due to complexities caused by Covid. 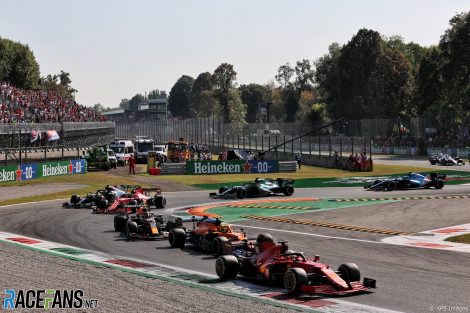 However, Imola is likely to return full-time, while the futures of Paul Ricard and (whisper it) Monaco – which is out of contract and can no longer rely on the ‘old boys club’ for support – look shaky. That could explain why Miami is confident of a May date.

As regards this year’s final calendar format: a decision regarding Qatar will be taken this week after the FIA and FI submitted the vaccination information required by the Qatari government. Turkey is a given despite concerns over Covid: F1 informed teams that ‘red zones’ will no longer play an overriding role when it comes to venue selection, and that they will need to manage any national quarantine or isolation requirements.

Dinner is a simply ginormous pizza followed by probably the best panacotta I’ve tasted – reason enough to look forward to two Italian grands prix next year if, that is, Imola returns and Monza gets its financial act together. As related on Saturday, ticket prices were hiked astronomically this year, causing a significant drop in attendance.

Spectator numbers are capped at 50% of grandstand capacity – with no general admittance permitted – by government decree, which translates to 28,000 per day. Yet on Friday Monza attracted 10,000 and saw just 16,000 on Saturday. Sunday numbers are not available as this is written but a source indicated that 5,000 tickets were still available on Sunday morning.

As I stroll into the paddock on Sunday I notice a dark-jacketed individual ahead of me – Porsche CEO Oliver Blume, in Monza for the engine meeting. It lasted about 90 minutes and fortunately my sources provide the lowdown. It seems the meeting was not as positive as was spun – true, progress was made but three major issues remain and without agreement on these it’s back to square one: without Audi and Porsche.

Next chat is with Thierry Willemarck, the FIA deputy president for mobility and in the running for the same role should Graham Stoker be elected as replacement for Jean Todt. Thierry has fascinating ideas about the internal combustion engine – he is convinced it remains relevant for future mobility applications, particularly non-city and long-distance travel – and is on a mission to persuade Brussels that electrification is not the panacea to pollution.

Willemarck believes that motorsport can play a crucial part in this quest by developing e-fuels and other zero-carbon technologies, something I fully subscribe to. Willemarck knows of what he talks: he comes from a motor family and is a graduate engineer who worked in the automotive fuel and lubrication industry in Belgium before joining heading the Royal Touring Club of Belgium as CEO, which led to his FIA role. 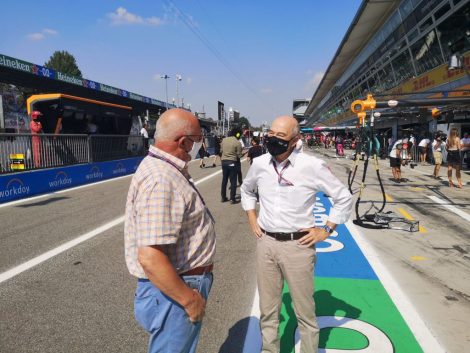 Before the race start, another weekend treat: the pit lane is open to the media on a quota basis. I savour strolling through the pits, being able to examine F1 cars at such close quarters and differing pre-start modus operandi per team. I spy Peter Sauber, a man for whom I’ve always had enormous respect, and we catch up briefly before he agrees to take my call later in the week. He has Raikkonen anecdotes to share, he says…

Post-race I head for McLaren to congratulate CEO Zak Brown on the team’s one-two and we reflect on the feature I wrote about his successful management of various motorsport activities. The secret he told me here in April is to have the right people for the various roles, and Sunday vindicated that approach. A fortnight ago his Extreme E team won in Greenland; on Sunday McLaren scored a one-two on Ferrari turf.

True, Saturday’s sprint race result set them up for it, but there is no denying that both Daniel Ricciardo and Lando Norris were in a position to do the business even before the two title protagonists took each other out.

I depart Monza at 8pm, heading for Belgium via Switzerland, Ingolstadt, and Munich. Then it’s time to prepare for Sochi.