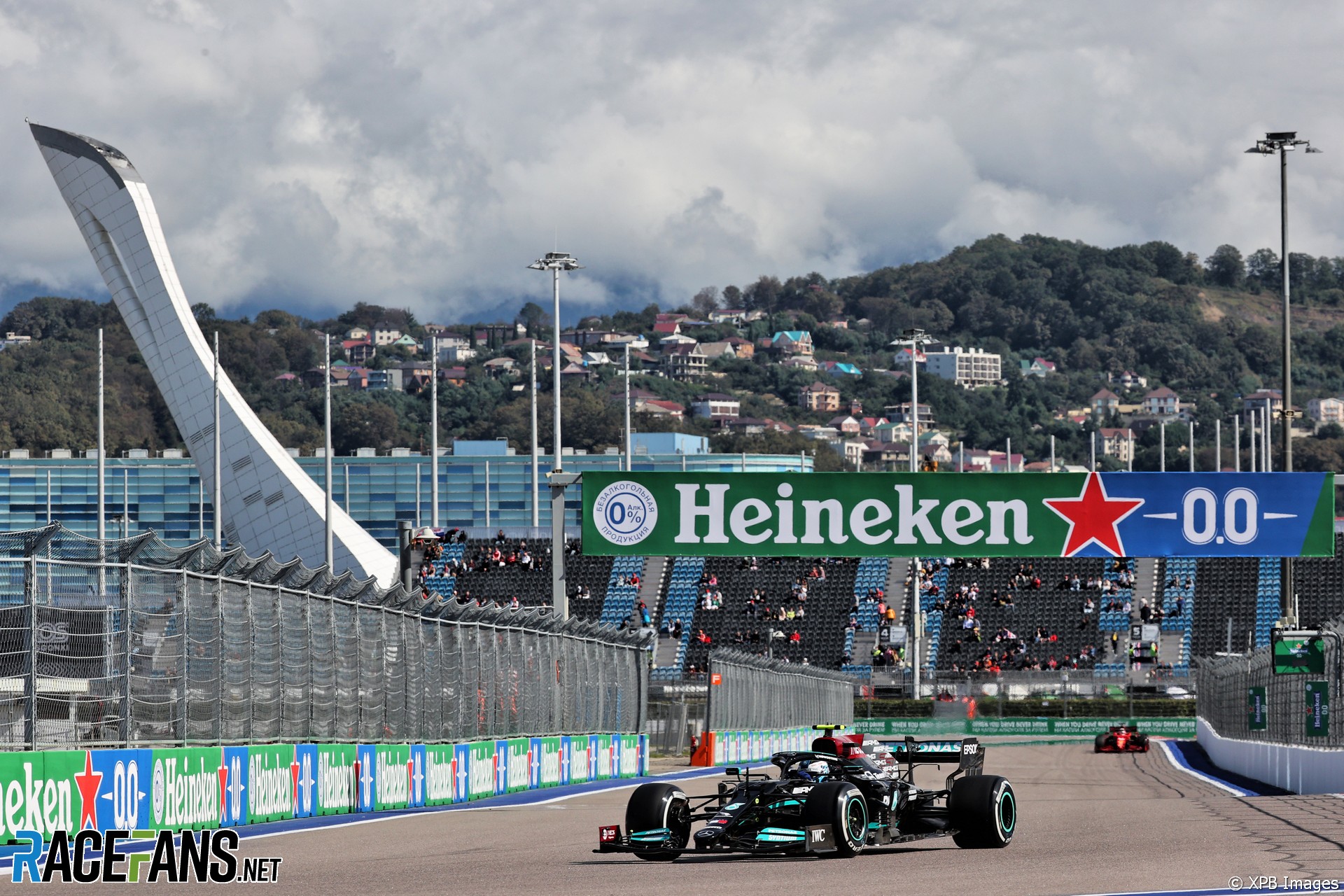 Mercedes showed their usual pace around Sochi in the first practice session for the Russian Grand Prix.

Valtteri Bottas and Lewis Hamilton headed the the times in their W12s. However Max Verstappen was just two-tenths away from the pace in his Red Bull.

The session started warm and dry, track temperatures rising after a slippery start to the Formula 3 practice session earlier in the morning.

With heavy rain a threat to Saturday’s sessions, drivers were keen to get out of the pits early and log some laps. After being penalised for an incorrectly-positioned practice start during last year’s race, Hamilton was reminded by engineer Pete Bonnington to only do them at the start of the pit lane, as he was one of the first cars to head out.

Charles Leclerc, who has taken a new power unit this weekend, set an early fast time, leading the first 10 minutes of the session. He was beaten by the Mercedes pair, initially running hard tyres while the Ferrari’s time had been set on softs. Bottas took the lead over Hamilton, extending a

Max Verstappen claimed the fastest time after 20 minutes of running, despite the Red Bull driver complaining that the regenerative settings on his car were “horrible” and that it was trying to recharge as he wanted to accelerate. Verstappen set his time on soft tyres, while Mercedes held their faster runs in hand.

By the halfway point both Hamilton and Bottas had started their soft tyre runs, initially well ahead of any other cars, setting times in the 1’34 while other drivers had been 1’35 or higher on their best laps at that point.

Lando Norris had the first of two minor incidents during the session as he was going for a second fast lap, running wide at turn 10 and picking up paint on his tyres. The second occured as he returned to the pits after the chequered flag, clipping the pit wall and spinning at the pit entrance. The McLaren driver sounded confused about the incident himself, telling the team “Err, I’ve just crashed” as he righted the car and came in with minor front wing damage.

Pierre Gasly was typically high up in the mix, with team mate Yuki Tsunoda further back, as has often been the case in practice this year. Following the chequered flag, Tsunoda described the car as “so nervous” in a radio message to his engineer. A strong lap from Gasly midway through the session put him into the top five, only to be beaten by Sebastian Vettel late in the session.

Sergio Perez, who favours Sochi as a track, was ninth fastest – behind both Ferrari cars, Vettel, Gasly and Norris. Of the two Alpine drivers, only Fernando Alonso was able to breach the top 10, fractionally ahead of team mate Esteban Ocon.