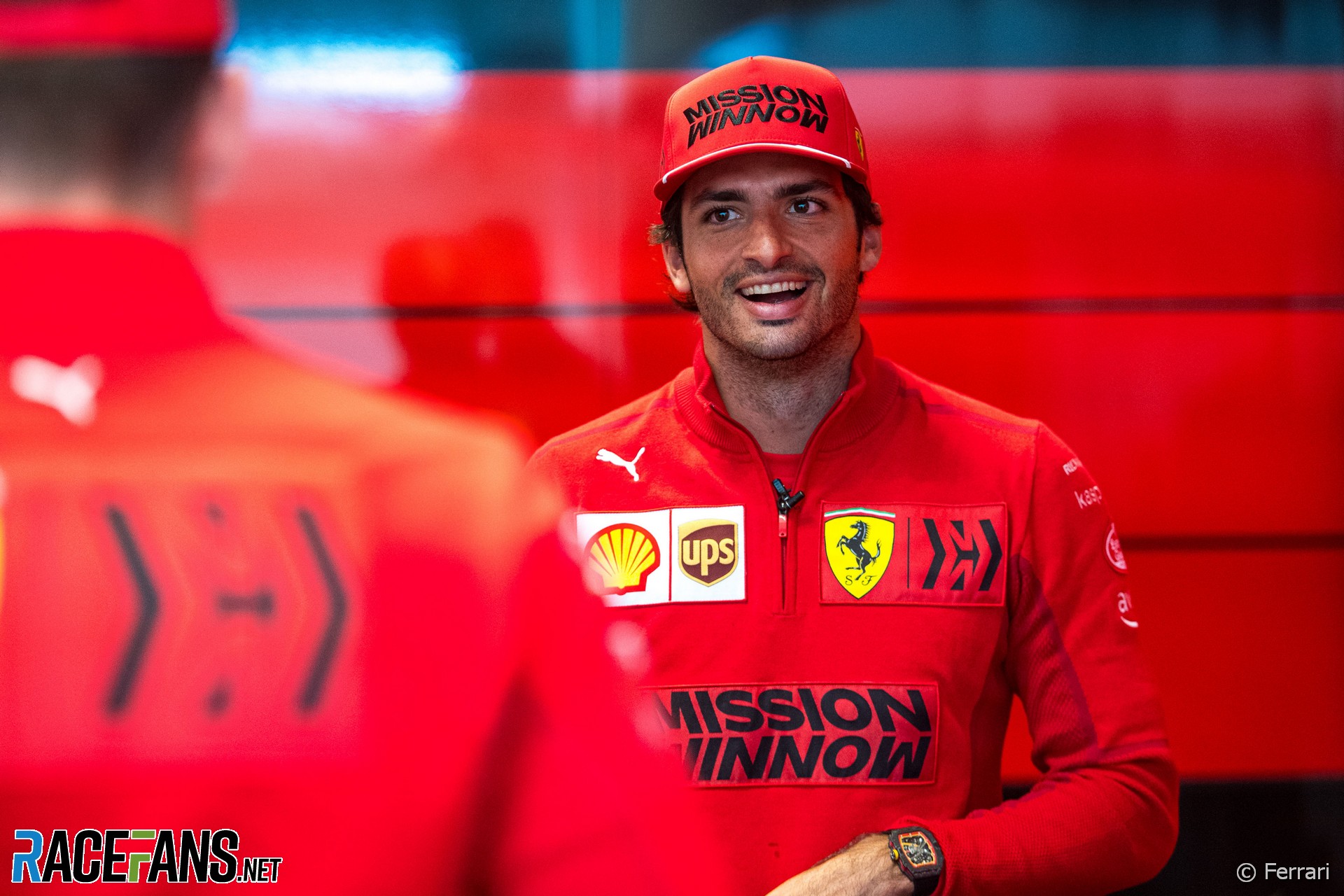 Lewis Hamilton has fallen 19 points behind Max Verstappen in the championship fight but Sainz believes there’s fight left in the world champions with five races remaining.

“I think it’s still tight,” said the Ferrari driver. “I think one DNF can change the whole picture.

“And I think Mercedes haven’t said the last word. I think they’re going to come back strong after a few difficult weekends. Red Bull look to have a stronger package all around but Mercedes and Lewis are Mercedes and Lewis, so let’s see.”

Russell ‘120% focused’ on Mercedes on day after finale

George Russell is preparing to throw his full effort into preparing for next season after Abu Dhabi Grand Prix.

“Monday morning after Abu Dhabi race, it will be 120% percent focus on all things Mercedes,” said the Williams driver, who will join Hamilton at the team next year.

“I’ll be driving in the test afterwards,” he continued. “Back in the factory as soon as I fly back from the test, straight to the factory and we’ll do some simulator, meet some more people.

“I’m in a very fortunate position because I’ve obviously spent so much time with Mercedes as a team from 2016 all the way through until 2018. And still whenever we see each of at the airports or the tracks, I know them as well as I know almost everybody at Williams, really. So I’m in a very fortunate position that I’m going into a group and a family that I know so well.”

Gasly: “intense” to return to track of first podium

Pierre Gasly said it was an emotional experience to walk the Interlagos track for the first time since his debut on the podium at the track two years ago.

In a tough campaign which had already seen the death of his friend Anthoine Hubert and Gasly’s demotion from Red Bull to Toro Rosso, Gasly clinched a shock second place in the 2019 Brazilian Grand Prix, drag-racing Hamilton to the finish line.

“Obviously, your first podium in Formula One is always a moment,” said Gasly, “very strong, very intense in terms of the emotion that you just don’t forget.

“So even just doing the track walk this morning was kind of exciting to rethink about that finish, with Lewis going up to the last corner to the line and it’s a place I love.

“The track is very nice and I obviously love this memory of that beautiful race we had with my first podium. And usually Brazilian fans are really intense, so really passionate and on Sunday, the energy is pretty, pretty intense. So I’m really, really happy to be back.”

“I knew Pedro as a driver when I was growing up, as a child and I knew he was racing in Formula 1,” Vettel explained. “But then he retired and I lost sight because I followed Michael and other drivers in Formula One and you don’t think about the drivers that retire.

“I read a really interesting book about a year ago and it was mentioning in Pedro Diniz, but not because of his racing history, but because of what he’s doing now.”

Vettel, who has been outspoken on ecological matters during the 2021 season, said “the way he’s approaching agriculture is basically all about avoiding substances and chemicals and farming in a natural way and giving something back rather than just depleting the soil.

“It’s a very exciting way of doing agriculture, and I was happy to have a look at his farm and learn about it and learn about his path, what he’s been through – the idea, the objective and his intention – which I think is very good and very-forward thinking and something the world needs. I think it’s a very honourable job to supply the world or to supply people with food and doing it in a responsible and regenerative way, I think is a great approach.”

In the upcoming weeks, @AJFoytRacing has plans to test Jack Aitken with plans to run him in a 3rd full time car in 2022. #IndyCar

On our final night at #COP26 we unveiled this special edition Formula E car.

Our car is a physical representation of creating a planet that can flourish and thrive, as we race for a better future. #ChangeAccelerated @COP26 pic.twitter.com/c6nCyTyWyK

"'We are ready to take 20% more attendance in comparison with 2019, so we added to our structures,' Adler said, crediting the success in attendance to younger fans. 'Previously, parents dragged their children to the race here. Now it is seems to be children taking their parents to Interlagos'"

"Attendees will be able to move freely between the zones, which will be used to promote regional tourism and investment. They will need to be fully vaccinated."

"Gastao Fraguas, who won the World Karting Championship for Formula A in 1995, will be the figurehead of the championship and will work with the Brazilian federation and staff at Vicar in operating the series."

" Graves: 'Right now, our focus is on NASCAR, GTD, SRO, NHRA, Formula Drift, USAC, World of Outlaws and off-road racing, so we’ve got a lot on our plate right now and are excited for all those forms we represent.' IndyCar declined to comment on possible talks with Toyota."

Although the sprint qualifying format is designed to bring in more viewers, Paul K points out that in territories where the live races are already paywalled, it restricts visibility of other sessions.

Being a UK viewer without Sky, sprint ruins the weekend. On a normal weekend on Channel 4 we get highlights of qualifying and the race.

On a sprint race weekend we don’t see qualifying, just sprint race and race. While qualifying can provide interest all the way through the sprint race is pretty much over after the first two or three corners.