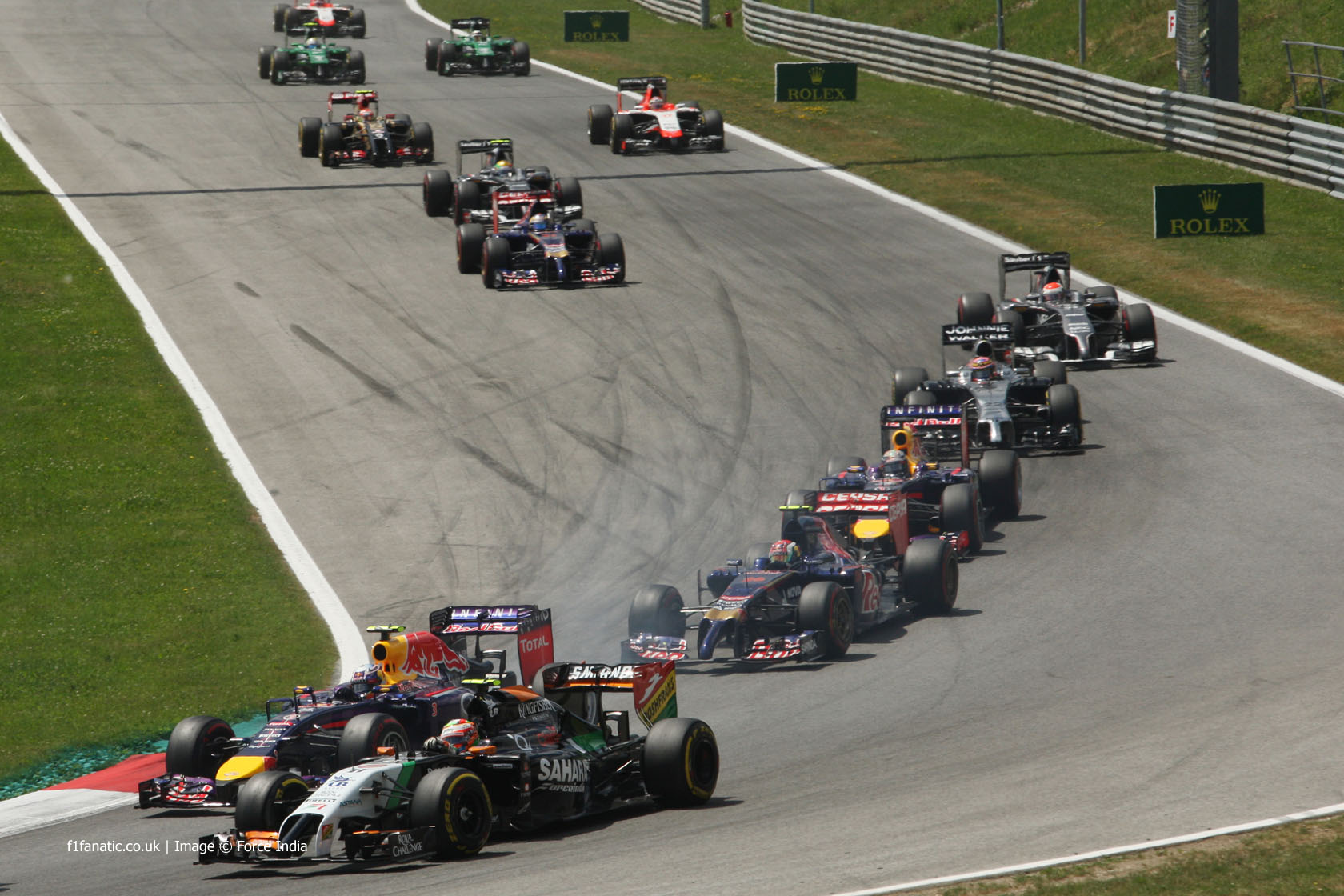 Which F1 driver was the best performer during the Austrian Grand Prix weekend?

Sebastian Vettel – Failed to make it to Q3 for the third time this year and things didn’t get much better in the race. An engine glitch left him a lap down, then he nudged Gutierrez and damaged his front wing, shortly after which the team retired his car to save the engine.

Daniel Ricciardo – “Daniel was quicker in turn five and has been quicker in turn two all weekend,” Vettel acknowledged after his team mate took fifth on the grid. But a poor start saw Ricciardo run wide at turn one and he was later demoted a place by Kvyat when he ran wide avoiding Vettel. Rescued some pride for Red Bull in their home race by passing Hulkenberg for eighth on the final lap. Nico Rosberg – Lined up behind the Williams pair, blaming poor balance for his lack of pace on his first lap, after which his team mate’s mistake kept him from making an improvement. Couldn’t make a pass stick on Bottas at the start but jumped both Williams drivers at the first round of pit stops, after which a win looked likely. He had to bide his time behind Perez and was fortunate not to lose more ground by running wide at turn one. Just kept out of Hamilton’s reach to take his third win of the year.

Lewis Hamilton – As in Canada he looked a good bet for pole position until Q3. This time he made two mistakes, one at turn eight on his first lap and another at turn two on his second, leaving him ninth on the grid. A superb start rectified that and he ended the first lap in fourth after picking off Alonso. Quicker pit stops might have helped him jump ahead of the Williams drivers more quickly but they wouldn’t have got him ahead of Rosberg. Whether it might have made for a closer fight at the finish is another matter, but Hamilton also had to keep on top of high brake temperatures.

Fernando Alonso – Pleasantly surprised to line up fourth after some problems in qualifying including a mistake on his first run in Q3. He dropped one place to fifth at the chequered flag but he was never likely to keep Hamilton behind, and he was keeping Massa honest in the closing stages.

Kimi Raikkonen – Not much to celebrate in his 200th race. He locked up and damaged his left-front tyre during his final run in Q3, leaving him eighth. He gained a place at the start but 15 laps proved too much for his rear tyres in the first stint and a slow in-lap cost him several places. He was also struggling with his brakes, and a few too many trips onto the run-off at turn eight resulted in a warning during the race. He picked up a point for tenth.

Romain Grosjean – Unhappy with his car, he had a messy final lap in Q2 and his team elected to start him from the pit lane so they could make further changes to his car. Had difficulties with tyre graining during the race on his way to 14th place.

Jenson Button – A braking problem in final practice limited to four laps and left him on the back foot in qualifying, where he failed to reach Q3. From 11th on the grid he might have had a good race using the soft tyre but he lost ground at the start for which he blamed Hulkenberg: “there was no real need for that as there was enough room for both of us”. There was no flying end to his race this time and he ended it where he started.

Kevin Magnussen – Claimed his best starting position since Australia with sixth, less than five-hundredths of a second behind Ricciardo. He was still there with half-a-dozen laps to go but was powerless to prevent Perez, on a different tyre strategy, breezing past him. Nico Hulkenberg – Fell foul of the track limits at turn eight during qualifying and had his best Q3 time deleted, leaving him tenth. His team mate had better pace on the alternative tyre strategy and Hulkenberg had to let him by at mid-race – though he didn’t understand the order from the team at first. Lost another place on the final lap to Ricciardo.

Sergio Perez – Qualified 11th, started 15th after his five-place grid penalty was applied and Grosjean’s car moved into the pits. Made a great getaway and crucially got ahead of Button, who also started on the soft tyres. That meant Perez hit the front when the leaders pitted, and he stayed there for 11 laps. A final attacking stint on the super-soft tyres saw him pick off Magnussen for sixth, but Alonso was too far up the road.

Adrian Sutil – Sauber’s race was a comedy of errors – Sutil was accidentally told to stop when the team were trying to halt Gutierrez’s departure from the pits with a loose wheel. His weekend had begun badly when a trip across the kerb at turn eight during Q1 cost him a chance to progress beyond the first stage of qualifying.

Esteban Gutierrez – Well off Sutil’s pace in qualifying, his race was ruined by the pit stop error and he was the last of the runners when the chequered flag fell, seemingly unable to pass Ericsson’s Caterham.

Jean-Eric Vergne – Didn’t get on top of the car as well as his team mate did and failed to accompany him into Q3. was running 13th when his brakes failed, causing his fifth car-related retirement in eight races.

Daniil Kvyat – One of few drivers to have raced at the circuit recently, Kvyat was a surprise fourth in final practice and claimed his best qualifying position of the year so far with seventh. Lost a few places at the start but seized his chance to take ninth off Ricciardo. However his race was ended by a suspension failure. Felipe Massa – Pinched pole position off his team mate with a lap which, though untidy in places, was cleaner than any of his rivals managed. He led convincingly at the start but a late first pit stop dropped him behind Rosberg. Hamilton also demoted Massa as he came out of the pits, the Williams driver seemingly not spotting the Mercedes coming at him from such a long way back. Bottas also jumped him at this point, and in the closing phase of the race Williams were more preoccupied with keeping him ahead of Alonso.

Valtteri Bottas – Might have taken his first pole position had it not been for a mistake at turn six. But in the race a quick first pit stop helped him get ahead of Massa. Bottass took the fight to Rosberg in the middle of the race when the Mercedes driver made a mistake, but Williams’ strategy meant it was doubtful he was ever going to finish higher than third. His pace at the end of the race showed they could have been more aggressive.

Jules Bianchi – Believed he could have been closer to the Saubers in qualifying with a clean lap. Using a single stop strategy he passed Kobayashi towards the end of the race and was catching Grosjean’s ailing Lotus in the final laps.

Max Chilton – Lost some track time in final practice but given his three-place grid penalty it was always unlikely he was going to start anywhere other than last. He improved on that during the race by getting ahead of Ericsson, and was closing on Koabayashi at the end.

Kamui Kobayashi – Ended his second practice session slightly early with a braking problem. Said his qualifying effort was “one of the best laps of the season”, but couldn’t translate that into a Bianchi-beating performance.

Marcus Ericsson – Came to a stop in first practice due to an ERS-H control unit fault, but was running again in the second session. However in qualifying only one of his four flying laps counted as he kept running wide at turn eight. Fell behind Chilton in the race but kept Gutierrez behind.

Who was the best driver of the 2014 Austrian Grand Prix weekend?