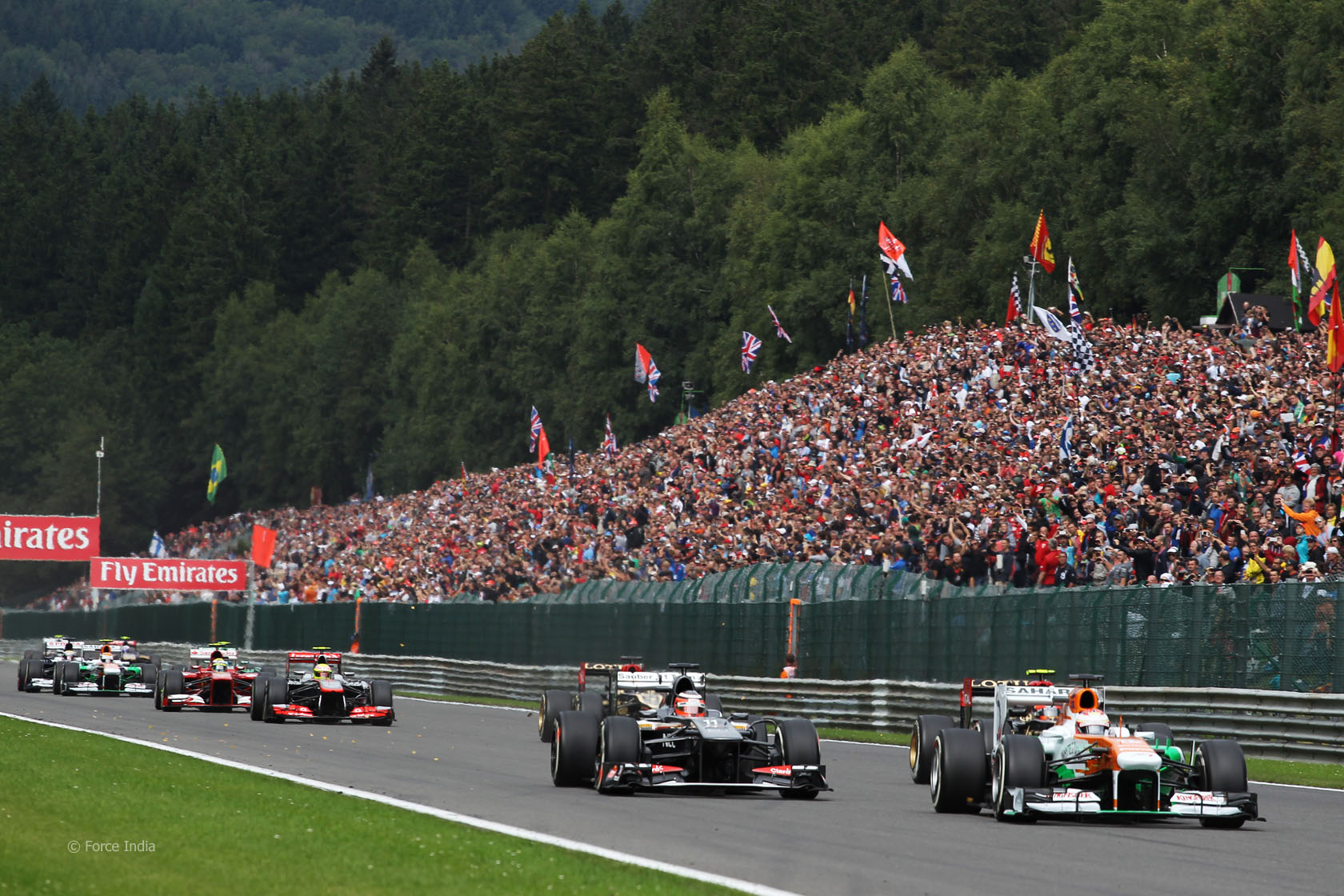 After a month of respite to draw breath, Formula One’s eleven teams now prepare to charge headlong into what could well be the most challenging final stretch of a season in recent memory.

Over the final eight rounds of the 2014 season, not only must the teams and drivers contend with some of the fastest and toughest races on the calendar – including the challenge of a brand new circuit – the likelihood of a flood of engine component change penalties means we could be set for a frantic finish to this year’s championship.

And after four weeks without any Formula One action, where better to restart the season than Spa-Francorchamps, home of the Belgian Grand Prix?

Adored by drivers, teams and fans alike, Spa is one of the quickest, most challenging and organic circuits on the calendar. With an abundance of long straights and high-speed corners – including the famous Eau Rouge – F1 cars are rarely more spectacular to watch than during the Belgian Grand Prix.

But with new turbo engines comes an even greater challenge for drivers in 2014, with some drivers unsure whether the dramatic plunge and crest through Eau Rouge and Raidillon can still be tackled without lifting the throttle, as it has been since the V8 era.

Spa’s high-speed nature means that engines will be put under severe strain this weekend. With many drivers already close to exceeding their engine component allocations – particularly those with Renault power – some teams will head into the next two race weekends somewhat nervously.

Aside from the challenges it provides in the dry, Spa is notorious for its unpredictable micro-climate that ensures the threat of rain constantly hangs over the 7km circuit. While races here are often dry, when the rain does fall, it never fails to produce dramatic races.

Pirelli have opted to bring the soft and medium compound tyres to Belgium for the first time since 2011. It’s a bold decision as on that weekend several teams were alerted to tyre damage problems caused by using camber angles beyond the limits recommended by Pirelli. The Red Bull pit wall was a focus of concern, though it didn’t keep them from recording a one-two finish.

The second half of the season will also begin with a new driver in the field, as Caterham give three-time Le Mans 24 Hour winner Andre Lotterer a unique opportunity to make his grand prix debut, almost 12 years since the German last tested a Formula One car with Jaguar.

Fresh from his second victory of the season in Hungary, Daniel Ricciardo’s stock is at an all time high. Despite the performance advantage of the Mercedes this season, he is best placed of all the remaining drivers to mount a late – though unlikely – title challenge.

Given the RB10’s penchant for high-downforce circuits, it seems unlikely that win number three will be on the cards for him this weekend, unless Red Bull and Renault arrive at Spa with some significant improvements to their package.

After a season characterised by mechanical issues and some lacklustre performances, Vettel resumes his season knowing that he has always performed at his best during this final stretch of the year. Last year he was undefeated in the nine races which followed the summer break.

The destination of the drivers’ championship will effectively be decided over an eight race shoot-out between the two Mercedes drivers. But despite the 11-point head start that Nico Rosberg holds heading into this weekend, it’s Lewis Hamilton who holds the momentum after his dramatic recovery drive from the pit lane to the podium in Hungary.

Mercedes will almost certainly be the dominant force this weekend thanks to Spa’s long straights. Having not achieved a pole position since the Spanish Grand Prix back in May, a strong qualifying performance from Hamilton could go a long way towards him closing the gap to his team mate even further on Sunday.

After Fernando Alonso’s superb drive in Hungary secured Ferrari only their second podium of the season, Ferrari will be looking for another good result at Spa to buoy the tifosi ahead of the upcoming Italian Grand Prix. Remarkably, he has never won at this track, and unless it rains it’s doubtful that will change.

Team mate Kimi Raikkonen, however, is the most successful active driver at Spa. His fourth and most recent victory at the circuit in 2009 was also his last for Ferrari (pictured). There were signs of an upswing in his form before the summer break – the question is whether he has sustained that momentum four weeks later.

Having seemingly suffered the most from the banning of FRIC suspension at Hockenheim, Lotus have struggled to challenge for points ever since.

The team look to turn their fortunes around this weekend by introducing a raft of upgrades to the E22’s suspension, springs and front and rear wings.

Jenson Button’s tenth place in Hungary moved McLaren within a single point of Force India, and the team have a clear objective for this weekend to reclaim fifth place in the constructor’s championship from their fellow Mercedes-powered rivals.

Like many, McLaren are also introducing an upgrade package to their car this weekend – although Eric Boullier believes it will take some time for the effects to be felt.

“Spa and Monza are tracks where every team runs a unique downforce package, so it won’t be until Singapore – where we resume with a more conventional set-up – that we’ll get a clearer read on our progress,” he said.

A record run of points finishes for Force India came to a rather abrupt end in Hungary when Nico Hulkenberg retired after colliding with his team mate, before Sergio Perez crashed out of his own accord just a few laps later.

Force India will be keen to return to their point scoring ways immediately at Spa, a circuit which holds very happy memories for the team, who achieved their first and only pole position and podium finish here in 2009 with Giancarlo Fisichella.

Like Williams, Force India’s package has performed best around low-downforce circuits, meaning that the team will be looking for strong finishes by both drivers this weekend.

Adrian Sutil came desperately close to scoring Sauber’s first points of the season in Hungary. He crossed the finishing line within striking distance of Button’s McLaren.

Despite the disappointment, Sauber will know that if any of the eight remaining races is likely to offer the chance of stealing some points through attrition, Spa may well provide the best chance of another rain-affected or chaotic race.

With eight DNFs recorded in the first 11 races of 2014 prompting technical director James Key to describe Toro Rosso’s points haul so far as “pathetic”, reliability will be a major focus for the team during this final stretch of the season.

Following the announcement that Max Verstappen will partner Daniil Kvyat at Toro Rosso next season, Jean-Eric Vergne has eight races to convince other teams he deserves a place on the 2015 grid. After a strong mid-season run, Hungary proved a difficult race for Williams. But with two low-downforce power circuits back-to-back, Rob Smedley anticipates a strong performance by the team over the next two races.

“The drag sensitivity – especially at Spa – is very high. And we know our car is very strong in those areas,” said the team’s head of vehicle performance. “I’m reasonably confident our car can go well in both of those races, but I’ve said before that we don’t fear anywhere.”

Each race that passes without a Sauber or Caterham points finish is another step closer for Marussia securing a valuable ninth place finish in the constructors’ championship.

Jules Bianchi strengthened his claim to a future place at Ferrari with some strong drives in the first half of the season. However Marussia’s edge over Caterham seems to have been blunted by the removal of FRIC, and with their rivals bringing a major upgrade package this weekend Marussia need their lead driver to be at the top of his game to protect their championship advantage.

Caterham’s CT05 will have a new look this weekend with a revised nose design expected to appear. There will be a new face behind the wheel as well, as Kamui Kobayashi steps aside for World Endurance Championship and Japanese Super Formula racer Andre Lotterer.

Having tested for Jaguar in between 2001, Lotterer has not driven a representative F1 car for 12 years. But he has no shortage of experience in comparable machinery when in comes to sophisticated hybrid systems (Audi’s R18 E-tron Quattro) or high-performance single-seaters (Super Formula being one of the quickest categories outside F1). He also knows Spa well, and has already competed in six- and twenty-four-hour races at the track this year.

If you’re heading to Belgium for this weekend’s race, we want to hear from you.