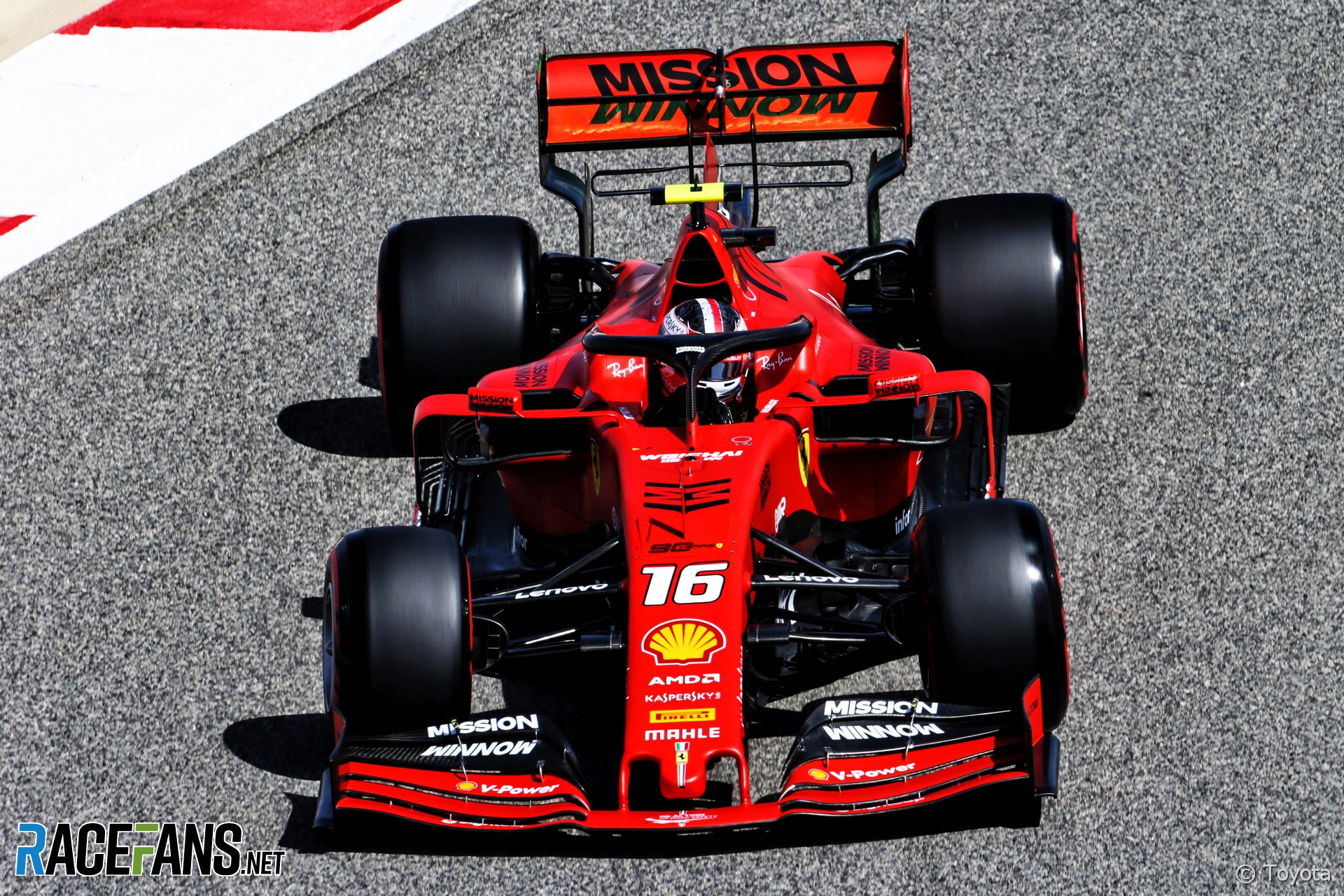 Charles Leclerc set the fastest time in the first practice session for the Bahrain Grand Prix, putting his Ferrari almost a second ahead of the closest Mercedes.

Ferrari, Mercedes and Red Bull all used the soft (C3 compound) tyre to set their quickest times in the first practice session. Track temperatures reached 45C during the first 90 minutes of running, which is significantly hotter than conditions are expected to be for qualifying and the race.

In the scorching track temperatures Sebastian Vettel and Leclerc took it in turns to set the fastest time. Vettel put his SF90 seven-tenths clear of early pace-setter Valtteri Bottas, but Leclerc followed it up with an even quicker time.

The Mercedes pair had to settled for third and fourth, Lewis Hamilton two-tenths of the pace of his championship-leading team mate. The Red Bull pair were next, Max Verstappen lapping within a tenth of a second of Hamilton, and Pierre Gasly close behind.

The usual top six cars were followed by Carlos Sainz Jnr, with a new power unit in his McLaren following the MGU-K failure which halted him in Australia. He was just one-tenth of a second off Gasly, and followed closely by fellow Renault user Nico Hulkenberg.

Two other teams completed the top 10: Daniil Kvyat for Toro Rosso and Kimi Raikkonen in his Alfa Romeo. The latter had problems with traffic during the session, being variously held up by Sainz and Kvyat’s team mate Alexander Albon.

Hulkenberg had an even closer brush with Raikkonen’s team mate in the dying minutes of the session. Antonio Giovinazzi collided with the Renault at turn seven, sending the Alfa Romeo flying briefly into the air.

Daniel Ricciardo narrowly missed a place in the top 10. The quickest Haas was only 12th, courtesy of Kevin Magnussen, after Romain Grosjean damaged his front wing. Sergio Perez led the Racing Points in 14th as team mate Lance Stroll missed a chunk of the session after spinning and grazing a barrier early on.

The Williams pair took up their usual places at the bottom of the times, albeit closer to the midfield than in Australia. George Russell had a quick spin at the end of the session but avoided the barriers.