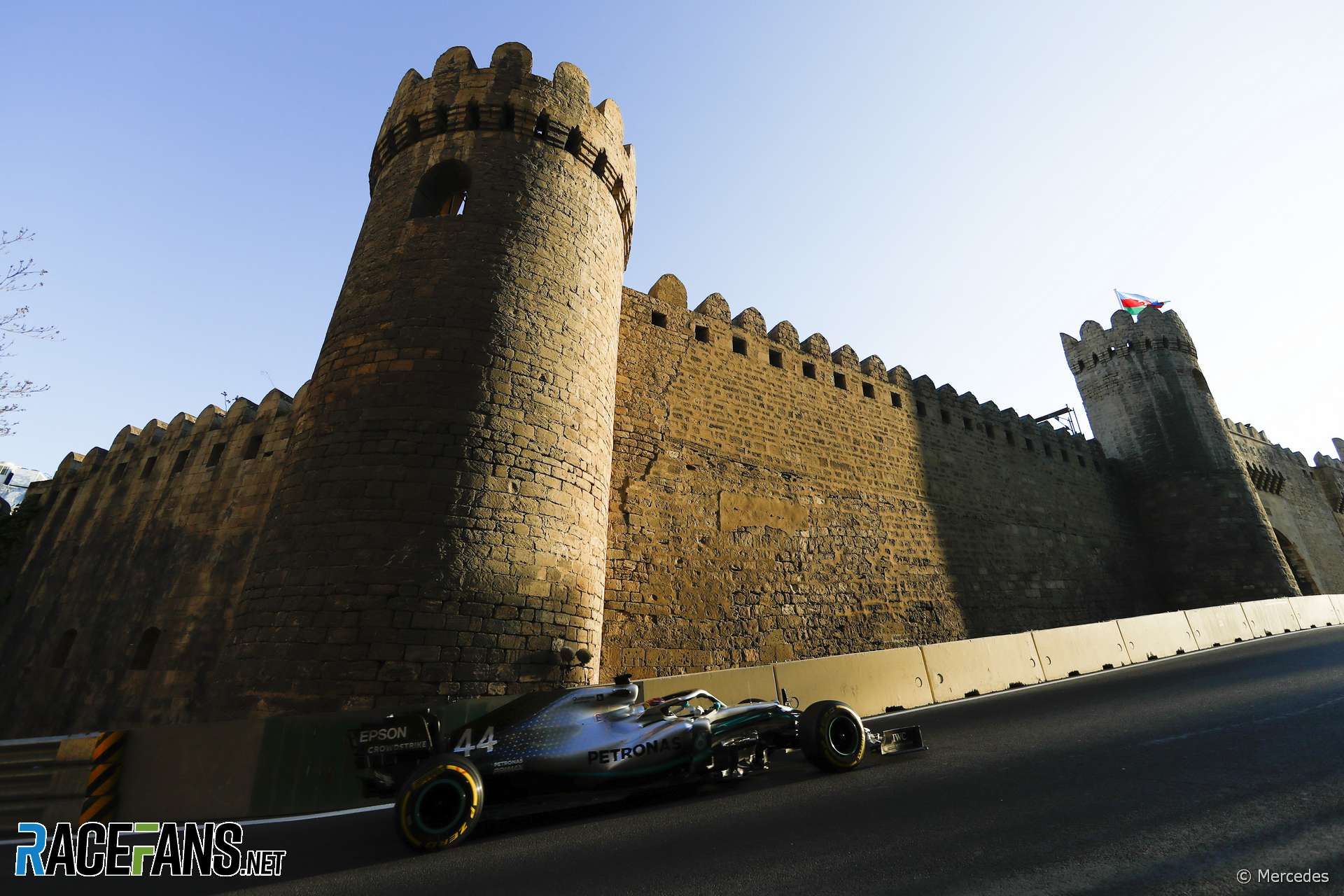 Charles Leclerc headed both Friday practice sessions for the Azerbaijan Grand Prix, though only the Ferrari drivers set times in the disrupted first session.

On the face of it the team appears to be in a strong position, much as it was in Bahrain. However Leclerc believes Mercedes’ long-run pace reveals their true potential.

“I think we are pretty strong,” said the Friday pace-setter. “On the other hand I am absolutely sure there is a lot more to come from Mercedes.

“They were very quick on the long runs so there’s no reason they are slow on the short runs so I’m pretty sure tomorrow when they put everything together it’s going to be very tight.”

As Mercedes’ Toto Wolff admitted recently, the silver cars don’t run their engines as hard on Friday as their red rivals do. So expect that six-tenths margin to the SF90s to shrink tomorrow.

Even so, there’s a good chance we’ll see a red car on pole position, as we did last year. Leclerc said he’s “confident with this track” and his car “felt surprisingly good today” – an encouraging sign compared to China, where he wasn’t comfortable in practice, and an indication Ferrari’s Baku upgrades are working as intended.

Nonetheless the team is leaving nothing to chance, and spent part of the second practice session experimenting with having its drivers ‘tow’ each other down the straight. “I timed the slipstream a little bit short with Charles,” Vettel admitted at one point. Will we see team tactics in qualifying to help them stay ahead of Ferrari?

A complicating factor for any team considering this plan could be the question of whether drivers will set their fastest times on their first flying laps or whether the tyres will need an extra run to fully get up to the correct operating temperature. This is due to Baku’s extremely smooth surface and the difficulty of balancing tyre temperatures front-to-rear, as the front tyres cool on the two-kilometre run to the start/finish line.

Last year the front-running teams were able to do their quickest run on the first lap. However the weather is expected to be a few degrees cooler tomorrow.

“Obviously the warmer it is the more chance there is of getting it on lap one,” said Lando Norris, who expects trouble with traffic in qualifying if that stays the case. “I improved quite a bit on my second and third laps so not going to be the best in terms of traffic management. There’s going to be a lot of people on slow laps making mistakes and it’s still going to be pretty hectic.”

The soft tyres appeared to offer a significant performance advantage over the mediums in practice, in the order of 1.6-1.7 seconds per lap. However Pirelli motorsport diretor Mario Isola pointed out that the track evolution was higher than usual in second practice, due to the lack of running in the first session, which may have exaggerated the difference. He expects the soft is around 1.2-1.4 seconds faster. This makes it more likely the front runners will be able to get through Q2 on the medium tyre, meaning they won’t have to start on the softest rubber.

Lewis Hamilton had a curious run-in with Kevin Magnussen at the end of second practice. The stewards chose not to investigate it, despite the pair making contact in the very quick turn 13, where there is no run-off.

As the lap began Magnussen left the pits and came out behind Valtteri Bottas, with Hamilton in his mirrors. The Mercedes driver moved to pass him, but had to slot in behind due to yellow flags at turn three. Hamilton was then told more than once on his radio to open up a gap between him and Bottas.

Despite this he continued trying to pass the Haas and the pair touched as he did. Just three corners later Hamilton backed off, increased the gap to Bottas, and allowed Magnussen by again. Given this, it’s curious Hamilton chose to take the apparently unnecessary risk of passing Magnussen in the first place, as it could have ended very differently.

Red Bull’s race pace looks stronger than their one-lap pace. However the latter will be of no concern to Pierre Gasly, who will have to start from the pits after failing to stop at the weighbridge when he was signalled to. Note that under the rules Gasly might have avoided the penalty if the team had realised he’d missed the weighbridge and brought the car back to it, so more than one opportunity to avoid this penalty was missed by the driver and team.

McLaren flattered to deceive in practice in China, and neither driver took their top 10 placings in practice at face value.

“It didn’t feel quick at all,” said Carlos Sainz Jnr after practice. “I was a bit surprised to see the lap time because honestly in the car it felt quite stressful not being able to warm up the rear tyres, struggling in pretty much every braking zone, every corner entry.

“[There’s] a lot of work to do for tomorrow. I prefer to guide myself by feeling more than by lap time and at the moment I think the feeling is still not there yet and we need to work a lot.”

The reduced running on Friday has left teams less sure of how competitive they are, which will hopefully make for a more unpredictable weekend.