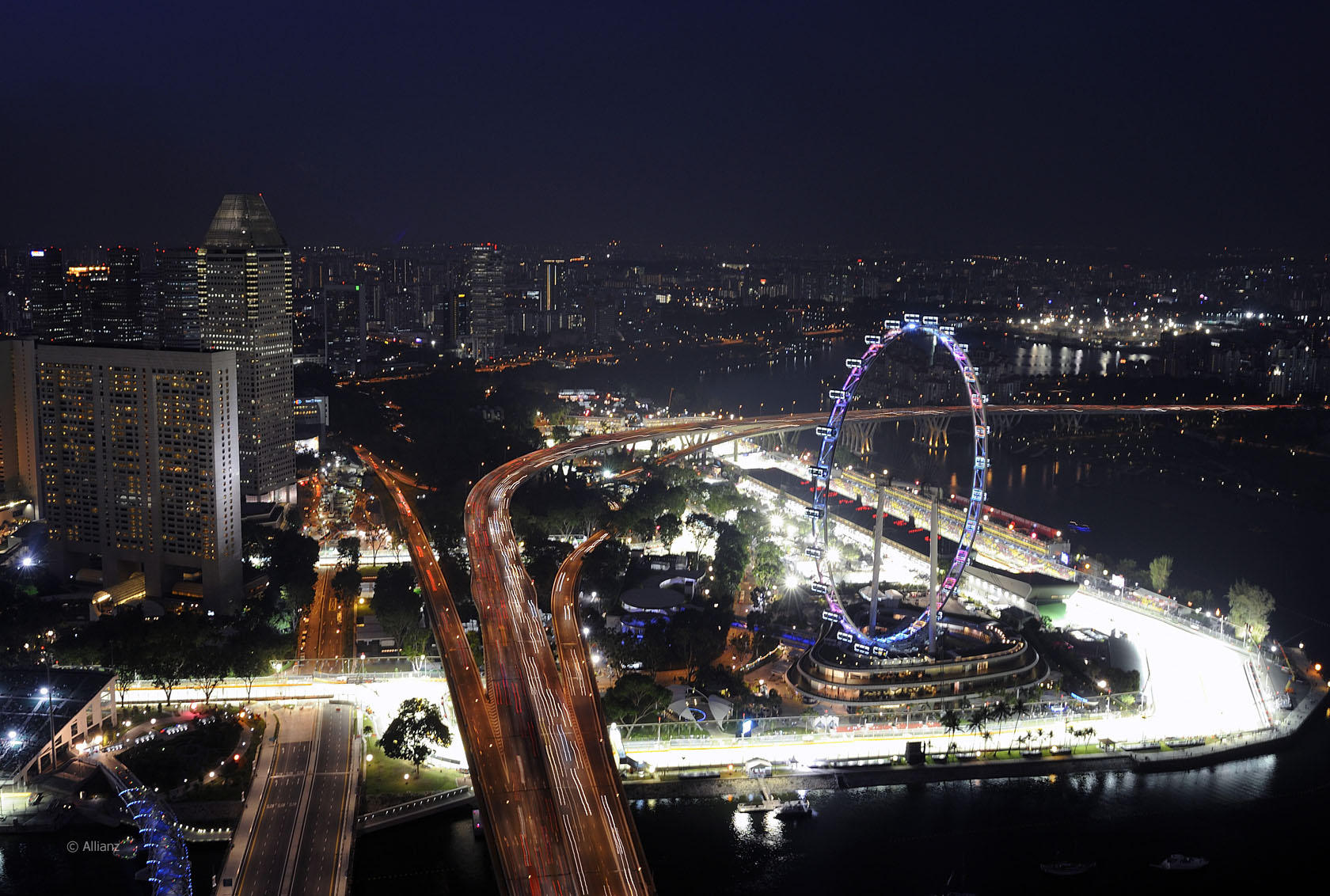 The final series of flyaway races begins with the Singapore Grand Prix.

This time last year Sebastian Vettel was already as good as crowned champion. So it’s encouraging that year, with seven races remaining, there are drivers from as many as four different teams still in the hunt.

We have begun to see the first signs of weakness from the teams as they strain to wring every last hundredth of a second out of their cars. The tooth-and-nail battle for performance has started to have an effect on reliability.

Both Red Bull and McLaren had to retire cars with technical problems during the Italian Grand Prix. And Ferrari were hit by problems prior to the race which hampered Fernando Alonso’s qualifying effort.

Singapore will brutally expose any such shortcomings. The brakes take a pounding from the unending series of slow corners and the bumpy track doles out serious punishment to gearboxes and engines. On top of that the oppressive heat, even after night falls, places a high demand on cooling – a particular problem for KERS batteries.

It’s not just the cars that suffer. Nico Hulkenberg described Singapore as “the toughest race of the year ?óÔéĽÔÇŁ physically and mentally”.

“I think it?óÔéĽÔäós because there are 23 corners on the track and it?óÔéĽÔäós one of the longest races of the year ?óÔéĽÔÇŁ always close to the two hour limit. So you certainly feel it after the race because of the high temperatures and humidity.”

Pirelli will bring their soft and super-soft tyres as they did in 2011. After a couple of races where one-stop strategies were the norm we could see two and three-stoppers this weekend – the latter was commonplace last year.

The likelihood of a safety car deployment will also figure in the teams’ strategy calculations. It has appeared in every previous Singapore Grand Prix, a total of six times in four races.

The return to high-downforce tracks will be a welcome change for Red Bull. The world champions struggled to compete on the quicker circuits. Although Vettel salvaged a vital second at Spa, Monza was a disaster for him and Mark Webber.

But while the Singapore circuit should suit the RB8 better, reliability will be a concern. A repeat of the Valencia alternator problem sidelined Vettel in Italy, and it was later discovered that the low RPM reached in slow corners was a contributory factor.

The team will be well aware that Singapore has one of the lowest average corner speeds of the year (105kph). That, combined with high ambient temperatures and the bumpy track, will make Sunday’s Grand Prix a two-hour torture test for their problematic electrics.

Even before racking up their third win on the trot in Italy McLaren had singled out this race as a critical stage of the championship. “It?óÔéĽÔäóll take until we get back to Singapore to fathom out where everyone?óÔéĽÔäós going to be for the rest of the year”, said sporting director Sam Michael.

McLaren are the form team at the moment and have slashed their deficit to Red Bull in the constructors’ championship from 70 points to 29 in the last three races.

There is no shortage of off-track distractions for the team at the moment, with speculation over Lewis Hamilton’s future reaching fever pitch. But there’s no indication yet that it’s put them off their stride.

Fernando Alonso has a record to envy at Singapore: First, third, first and fourth in the four races so far. And while the dubious circumstances of his first win here cannot be overlooked, nor should the fact that he has usually been competitive on merit at this circuit.

The ever-improving Ferrari F2012 may have been the quickest car at Monza two weeks ago. Alonso reckoned that without his problem in Q3 he would have easily taken pole position. Since then the team have had the further benefit of three days’ testing at Magny-Cours.

Put the two together and this is perhaps the first time all year that Alonso can be considered an early favourite for victory. If he leaves Singapore having maintained or even extended his 37-point championship lead, a third title will begin to look like a very realistic proposition.

Mercedes were another team who attended the three-day Young Drivers’ Test at Magny-Cours. They put it to good use, with Sam Bird and Brendon Hartley putting over 1,300km on a raft of upgrades for the W03.

These included new exhaust exits, mimicking those used by several of their rivals since early in the season, a further DRS upgrade and a small shark fin. The question now is which new parts will make it as far as Sunday’s Grand Prix – and whether they will restore the team to the kind of competitiveness they enjoyed in the opening races.

If they do, look to Michael Schumacher to be the one to make best use of them. He’s in excellent form at the moment, having out-qualified and out-raced his team mate in four of the last five Grands Prix.

Romain Grosjean makes his return to racing following his one-week ban. And he does so at a track which does not have particularly happy memories for him.

In 2009, with recriminations over Renault’s role in ‘Crashgate’ hanging in the air, Grosjean spun off during practice at the very spot where Nelson Piquet Jnr had infamously crashed 12 months earlier.

His return to the sport this year has been markedly more successful. But by his own admission, Grosjean has not been getting on as well with the E20 since the high of Valencia, where he was in contention for victory before being struck down by the same alternator problem as Vettel.

Lotus will bring a revised rear wing with improved DRS switching effect for this weekend’s race. They surely can do no worse than last year’s dismal outing (as Renault), which team principal Eric Boullier described as “embarrassing”.

Paul di Resta caught the eye with an excellent drive to sixth in last year’s race and is hoping for more of the same:

“The car has been strong on street circuits this year,” he said. “So I?óÔéĽÔäóm hoping that we will go well there, optimise the set-up and pick up some good points.”

Monza probably did for their hopes of beating Sauber in the constructors’ championship. Force India have eked out a nine-point margin over Williams but will be well aware that the performance of the FW32 means those rivals cannot be discounted. Sauber showed excellent pace on the low-downforce Spa and Monza tracks, though they weren’t entirely able to capitalise on it for reasons out of their control.

But they may have to adjust their expectations this weekend. The C31 has not gone as well on the previous high-downforce, low-grip circuits such as Monaco and Valencia.

“Out of the seven upcoming races I expect this one to be the most difficult for our C31,” head of track engineering Giampaolo Dall?óÔéĽÔäóAra admitted. However the team’s chances will be improved by a further aerodynamic update for their car.

Points-scoring opportunities have only come along infrequently for the Toro Rosso drivers. That makes it all the more frustrating for Daniel Ricciardo that he lost tenth place and his fuel pressure at the final corner at Monza.

New technical director James Key reckons there are improvements to be made with the car before the year is over. Whether that will give them further chances to feature in the top ten remains to be seen.

Eight races since scoring his maiden win, Pastor Maldonado is yet to add to his points tally. In the meantime Bruno Senna has made five top ten appearances and has closed to within four points of his team mate in the drivers’ championship.

The team say they expect to score points in this weekend’s race. Maldonado has demonstrated a flair for street circuits in the past – particularly at Monaco in junior categories – so if he can stay out of trouble he stands a good chance of reasserting himself over his team mate.

As they near the end of their third year in the sport this team has still probably never had more exposure than when Heikki Kovalainen’s car (then Lotus) caught fire at the end of the 2010 race.

The team remain some way off the midfield pace but hope to close the gap with the introduction of a new front wing this weekend. Ma Qing Hua will get another run during Friday practice for HRT, this time on a considerably more challenging course.

As usual he will drive in place of Narain Karthikeyan, who recently admitted that losing practice time was impeding his efforts to get on terms with Pedro de la Rosa. Nonetheless Karthikeyan outqualified his team mate for the first time this year at Monza.

Marussia’s most recent upgrade has strengthened their chances of not finishing last in the constructors’ championship for the first time. And Timo Glock will be eager to take the fight to Caterham on a track where he has excelled in the past:

“I have great memories from this race as I finished on the points in the first year and on the podium in 2009. Every year it?óÔéĽÔäós great to come back and without doubt it is my favourite race on the calendar.”

Are you going to the Singapore Grand Prix?

If you’re heading to Singapore for this weekend’s race, we want to hear from you.

36 comments on “Punishing track will push cars to breaking point”