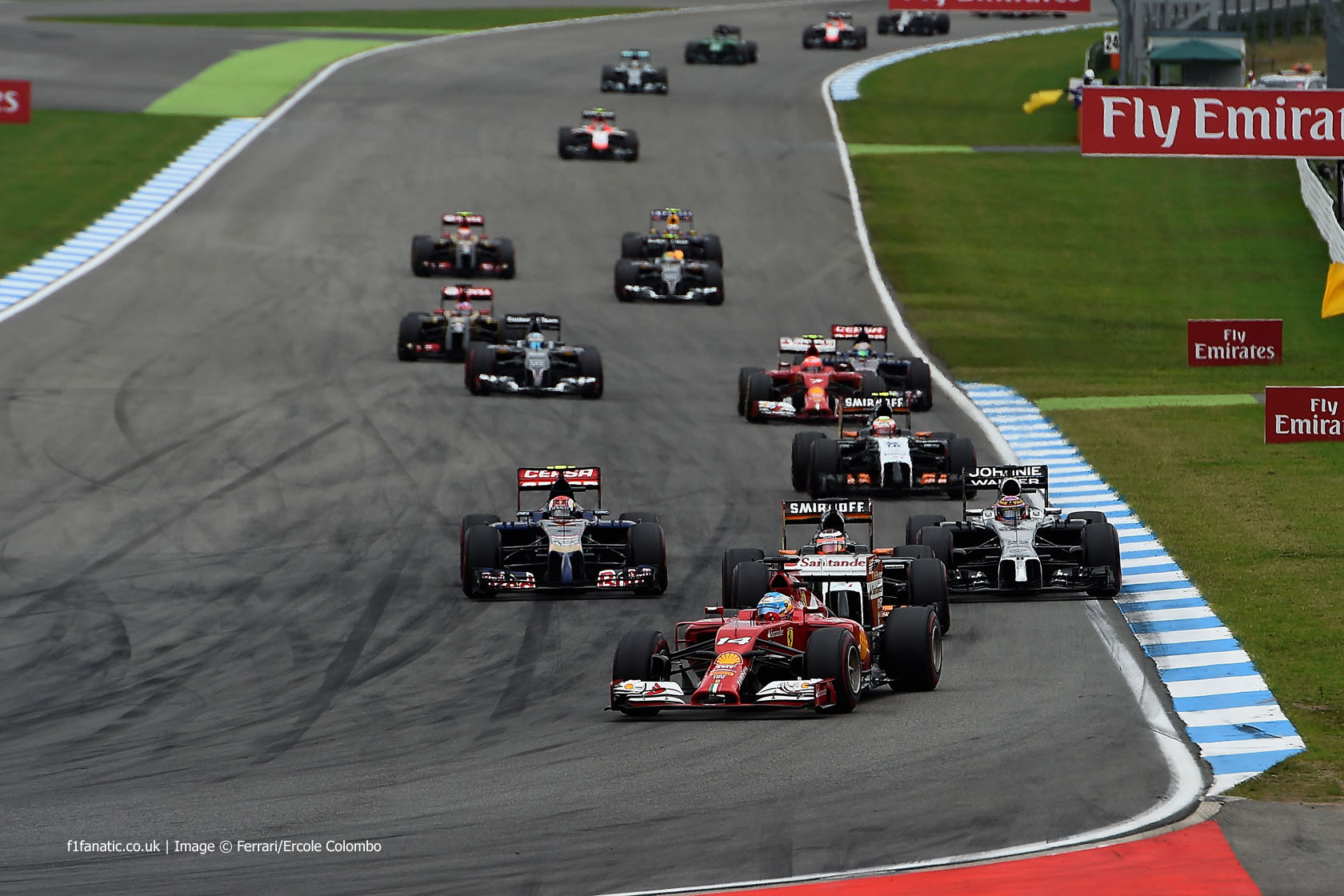 Which F1 driver was the best performer during the German Grand Prix weekend? Sebastian Vettel – Third after the first-lap collision, he finished the race in fourth but was always going to struggle to keep Hamilton behind. Came out on top in a three-way scrap with the Ferrari pair at the Spitzkehre, but was later passed by Alonso in the DRS zone. However by making his second pit stop a lap later than the Ferrari driver Vettel was able to go the opposite direction on tyre strategy, fitting super-softs for his penultimate stint. That allowed him to exploit the benefit of new tyre pace at the beginning of his final stint and get ahead – despite mishearing an instruction to conserve fuel as an order to run rich.

Daniel Ricciardo – Out-qualified Vettel again but had to take avoiding action at the start, slipping to 15th place. Made quick progress after the restart including a daring pass on Raikkonen while under pressure from Hamilton, but lost the place again a couple of laps later. Nonetheless an attacking three-stop strategy helped him gain further ground, and despite tired tyres in the final stint he put up a good fight against Alonso.

Nico Rosberg – In a sense it was a shame for Rosberg that he was unable to be measured against his team mate this weekend. Pole position and victory looked like a foregone conclusion after the events of Q1, but they weren’t, and Rosberg didn’t put a wheel wrong as he took his fourth win of the year.

Lewis Hamilton – Brake failure in qualifying was exactly what he didn’t need after his recent Saturday problems. Was in his usual battling form as he made his way through the field – his three-abreast pass on Raikkonen and Ricciardo was a highlight. But a misjudgement while overtaking Button damaged his front wing, and that ultimately forced him onto a three-stop strategy and compromised his attempt to pass Bottas for second place at the end. Fernando Alonso – Fourth at the end of lap one, Alonso kept Vettel honest through the opening part of the race and jumped ahead with an early second pit stop. Vettel re-passed him via strategy, however, and in the final stint Alonso had his hands full with the other Red Bull. After finally getting past he hit trouble at the end of the race, Ricciardo taking 2.6 seconds out of him over the final two laps, the pair covered by less than a tenth of a second at the line.

Kimi Raikkonen – “When I fitted the second set of new super-softs, my car was sliding all over the place and I lost the back end in turn two,” said Raikkonen after being knocked out during Q2. Matters improved little in the race, where he twice found himself pinned between two rivals at the Spitzkehre and suffered damage. He blamed that for his consequence lack of pace and finished a lap down, out of the points.

Romain Grosjean – Had a fright during the first practice session when his DRS failed to close at the Spitzkehre – the point on the track where the highest top speed leads into the biggest braking zone. “That was quite a special feeling I can tell you!” he said afterwards. He was in the hunt for points in the race when the team spotted a cooling problem on his car and retired his car to spare the power unit any damage.

Pastor Maldonado – Like his team mate, felt the team’s car had particularly suffered from the banning of Front-Rear Interconnected suspension. While several drivers planned on two stops but ended up on three, Maldonado had the opposite scenario, finishing 12th after two stops. Jenson Button – Pointed the finger at Grosjean for spoiling his first lap in Q2, and said the balance had gone on his second, leading to him being eliminated. Was well-placed to benefit from the first-corner crash and moved up to sixth. But the decision to try to avoid a third pit stop proved too optimistic – he had to come in for tyres with six laps to go. That salvaged eighth place, but he could have been in the Ricciardo/Alonso battle for fifth.

Kevin Magnussen – Very happy on Saturday when he equalled his best qualifying result so far with fourth. “I think we got everything out of the car in terms of set-up and our strategy throughout qualifying was perfect,” he said. But his race was ruined when Massa turned in on him at the first corner – an incident where no blame should be attached to the McLaren driver. Having fallen to last place, Magnussen overhauled 12 rivals and finished behind his team mate – a solid day’s work, if not the result he was hoping for.

Nico Hulkenberg – Force India would surely have loved a continuation of the blazing hot conditions from practice on race day. But even with the dip in temperature Hulkenberg was one of few drivers to make a two-stop strategy work, so having started ninth he finished one place higher, demoting Button at the end.

Sergio Perez – Getting into Q3 has been a problem for Perez this year but he delivered this time despite a problem earlier in the session meaning he only had one run. Passed Kvyat on the outside of the Spitzkehre for seventh at the restart, then survived an attack from his rival six laps later. After his second pit stop he spent seven laps stuck behind Sutil, to the frustration of his team. It cost him a place to Magnussen and he finished in tenth place.

Adrian Sutil – Knocked out in Q1 for the sixth time this year, then spun out during the race. “Suddenly, after my last pit stop, I lost power and when I entered the Motodrom I thought the engine would switch off,” he explained. “In the last corner I had a similar problem, then I spun and this time the engine did switch off.”

Esteban Gutierrez – Solid in qualifying, then demoted to 16th due to his penalty from Silverstone. He inevitably dropped behind the recovering Hamilton and Ricciardo soon after the start, but overtook Grosjean on lap five. Unable to keep the Toro Rossos behind in the mid-part of the race, he finished 14th.

Jean-Eric Vergne – Lined up five places behind his team mate having saved more tyres during Q2. He passed Sutil early on but fell prey to Maldonado via the pit stops, so despite overtaking the other Sauber near the end of the race he could only manage 13th.

Daniil Kvyat – Qualified a fine eighth on the grid, but spun out after contact with Perez – an incident he unreasonably blamed on the Force India driver. A drive train failure later caused a substantial fire and forced him out. Felipe Massa – Couldn’t match the pace of his team mate in qualifying, and was perhaps too busy watching the other Williams to notice Magnussen at the start. The pair collided and Massa was fortunate to escape injury after being flipped over. Though he was blameless in previous first-lap crashes in Australia and Britain, Massa was the driver best-placed to avoid this one, and though he laid the blame at Magnussen’s feet the stewards did not agree.

Valtteri Bottas – His only prior experience of F1 at Hockenheim was a rain-hit practice session two years ago, yet Bottas out-qualified Massa to start from the front row. Though he never seemed to have a quick enough car to rival Alonso, an error-free run on a two-stop strategy allowed him to keep Hamilton’s at arm’s length at the end.

Jules Bianchi – Marussia was another team which felt the impact of losing FRIC. While Bianchi was unable to take the fight to the Saubers, he finished over 40 seconds clear of his next closest rival.

Max Chilton – Dropped behind Kobayashi at his first pit stop and wasn’t able to make the undercut work at his final visit to get ahead again.

Kamui Kobayashi – A fuel leak triggered a fire on his car during the second practice session. Successfully kept Chilton behind during the race.

Marcus Ericsson – A hydraulic leak was discovered on his car towards the end of final practice, and it couldn’t be repaired in time for him to make it onto the track in qualifying. His race was ruined before it began when the team failed to fit a cover to his car in parc ferme, leading to a pit lane start and penalty.

Who was the best driver of the 2014 German Grand Prix weekend?