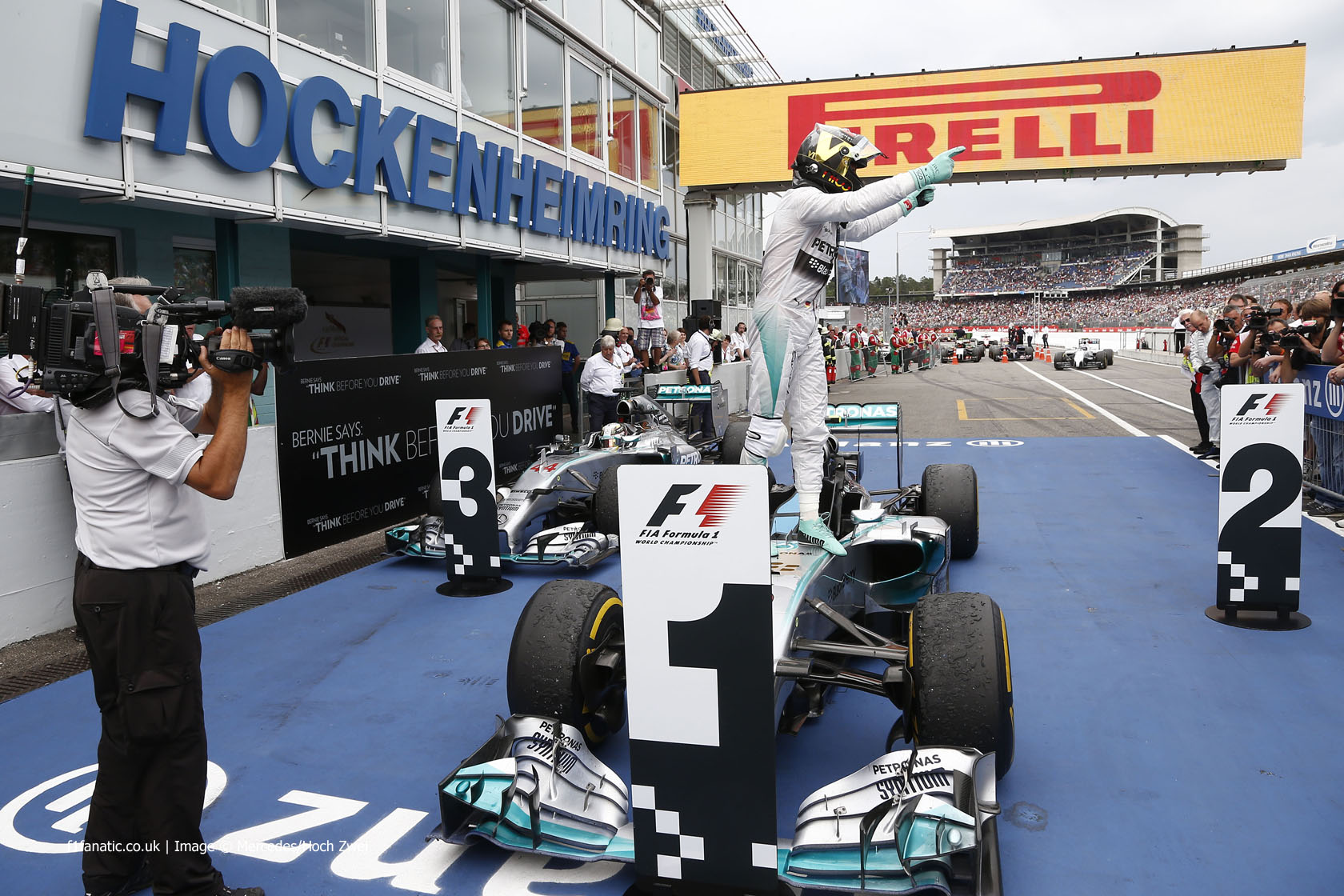 Mercedes revelled in another triumph on their home ground at the Hockenheimring. Never before in the history of the world championship had a German driver won the German Grand Prix in a German car.

Nico Rosberg therefore achieved a significant first. While one could argue he is as much a Finn as he is a German, and note that the Stuttgart-financed Mercedes cars are built in Northamptonshire, Rosberg’s racing licence and Mercedes’ championship entry both say ‘Deutschland’, so there was just cause for plenty of national pride.

But Mercedes’ satisfaction wasn’t complete. For the first time in 2014 a healthy W05 crossed the finishing line with a car in front of it which wasn’t the team’s other chassis. This first defeat came about thanks to a confluence of circumstances – the first of which occurred 24 hours previously. As Mercedes go into every race as clear favourites in 2014, Rosberg’s victory seemed inevitable he would from the moment his team mate’s broken brake disc pitched him into a barrier during qualifying.

Once the grid penalties had been factored in, a bruised but unbowed Hamilton lined up behind every single other car apart from Max Chilton’s Marussia and Marcus Ericsson’s Caterham – the latter starting from the pits. Even so, such has been Mercedes’ performance advantage this season Hamilton must have fancied his chances of recovering to second behind his team mate.

But from the start things didn’t go quite Hamilton’s way. A first-corner tangle between a blameless Kevin Magnussen and a careless Felipe Massa did have the beneficial effect of getting them out of his way. But the immediately deployment of the Safety Car to right Massa’s inverted Williams brought Hamilton’s first-lap assault on the tail-enders to an abrupt end.

Worse for Hamilton, the delayed Daniel Ricciardo was now not far in front of him, and once the race resumed Hamilton soon found himself losing time behind the Red Bull. When the race restarted Rosberg retained his lead ahead of Valtteri Bottas, who had been under pressure from Magnussen and Massa when the pair tripped over each other.

With those two out of the way, Sebastian Vettel now held third ahead of Fernando Alonso, Nico Hulkenberg and Jenson Button.

Further back Hamilton was 17th, three places higher than he’d started. He dispensed with four of the slower cars in the next three laps and was now on the tail of Ricciardo, who was making similarly rapid progress.

It wasn’t rapid enough for Hamilton, however, who applied pressure to the Red Bull driver as they caught and passed Adrian Sutil and Jean-Eric Vergne.

By lap 11 they were on Kimi Raikkonen’s tail and now things got really interesting. Hamilton took the inside line as they approached the Spitzkehre – the slowest corner on the lap – but with Raikkonen in front he couldn’t make the move stick.

Despite having to fend off Hamilton, Ricciardo’s traction was good enough for him to catch Raikkonen unaware and dive down the inside at turn eight. Now he had the Ferrari as a buffer between him and Hamilton. The Mercedes driver made an audacious bid to follow him as they entered the Motodrom section, but had to give best to Raikkonen.

But Ricciardo had enjoyed the best of his super-soft tyres and two laps later they were beginning to wilt. Raikkonen took to the inside at the Spitzkehre but left enough room to his right for Hamilton to mug the pair of them, locking up and clouting the Ferrari as he went.

The next time by Hamilton blasted past Sergio Perez in the DRS zone with far less drama. Button, Vettel and Bottas pitted over the next three laps so that by the 17th tour the traditional 2014 Mercedes one-two was restored. However Rosberg was 7.5 seconds up the road – and unlike Hamilton he’d already got his first pit stop out of the way. Had Hamilton’s race run according to plan from here on it’s likely he would have finished in that second place. When he came in on lap 27 he needed another 26-lap stint on soft tyres to reach the finish with just one further pit stop.

But it went wrong when he arrived on Button’s tail on lap 30, and mistakenly believed his former team mate was making way for him. It wasn’t an unreasonable assumption – the imperative of conserving tyres and fuel at different points in the race means sometimes drivers have to choose their battles, and Button did take a particularly wide line into the Spitzkehre on lap 30. Hamilton grasped at it, and by the time he realised Button wasn’t pulling aside it was too late, and he ripped the front-left part of his front wing off on Button’s sidepod.

Hamilton recognised his mistake and even gave Button a wave of acknowledgement when he flew past the McLaren in the DRS zone on the next lap. But that damage to the left-hand side of his front wing gave him more trouble with his tyres in the laps that followed, and eventually wrecked his hopes of completing the race with a two-stop strategy.

The team surrendered to the inevitable on lap 42, bringing Hamilton in for the first of two short stints on the super-soft tyre. This would still give him a chance of attacking Bottas at the end of the race on a reasonably fresh set of super-softs.

But eight laps after Hamilton’s pit stop Sutil’s Sauber got away from him at the final corner and he spun to a stop. Expecting a Safety Car, Mercedes summoned him into the pits to take advantage of it. But it turned out to be the opposite of his Monaco dilemma – on that occasion he expected a Safety Car but didn’t come into the pits, and one was deployed. This time he did come in – but the race stayed green.

That surprised many people, not least Hamilton’s own team mate. “I definitely got a bit worried when I saw Sutil’s car out there because I was sure there was going to be a Safety Car,” said Rosberg afterwards, “and that would have obviously made it a lot more difficult”.

When Hamilton left the pits for the last time on lap 52 he was over two seconds per lap quicker than Bottas. The 14-second gap between them was erased within seven laps, and with Bottas being told to “not race him hard” it seemed another Mercedes one-two was a foregone conclusion.

But Hamilton’s delays, his early switch to the final set of super-soft tyres, his front wing damage and the impressive traction and straight-line speed of the Williams allowed Bottas to stay ahead. He never even had to move off his racing line to defend – a temptation he did well to avoid, as it would have put Hamilton in a much stronger position.

There’s no denying Bottas needed a lot of cards to fall in his favour to become the first driver to beat a Mercedes ‘on merit’ this year, but he played the hand he was dealt to perfection and justly reaped the rewards. With three podium finishes in the last three races, he is increasingly staking a claim to being ‘best of the rest’ behind the Mercedes pair. Vettel took fourth after seeing off the two Ferraris at the Spitzkehre. It was a move which must have given Raikkonen deja vu, as he was once again squeezed by two drivers and incurred damage. That impaired his ability to look after his tyres and he slipped backwards out of the points.

Alonso gave chase to Vettel and shot past the Red Bull with ease in the longest DRS zone following their second pit stops. But Vettel took the place back after an early final pit stop – and thanks to some bold driving by his team mate.

Ricciardo had continued his march to the front and gave Alonso a hard time in the final stint, despite having tyres which were harder and nine laps older than the Ferrari driver’s. He stayed ahead thanks to some first-rate defensive driving, until Alonso finally squeezed through with six laps remaining.

The fight was gone from Alonso’s tyres though, and far from going after Vettel he had to fend off Ricciardo again on the final lap, the pair separated by less than a tenth of a second at the line.

Hulkenberg was one of few other drivers to make a two-stop strategy work. Button dropped behind him to eighth place after a late third stop, followed by his recovering team mate and Perez in the other Force India. While Rosberg romped to his fourth win of the year There was no shortage of action going on behind him. That went some way towards making up for the loss of another toe-to-toe battle between the title rivals.

For the third time in four races the main reason for that was Mercedes unreliability – a growing problem for the team which motorsport director Toto Wolff acknowledged even before their latest problem.

Under the circumstances Hamilton couldn’t have done much more to salvage the maximum available from his impaired weekend. But as the championship fight looks ever more likely to be decided by a narrow margin, those lost points could weigh heavily in the final reckoning.